It is time for farmers to take the lead in telling their stories and conceptualizing ways to connect their fellow farmers with effective technologies. 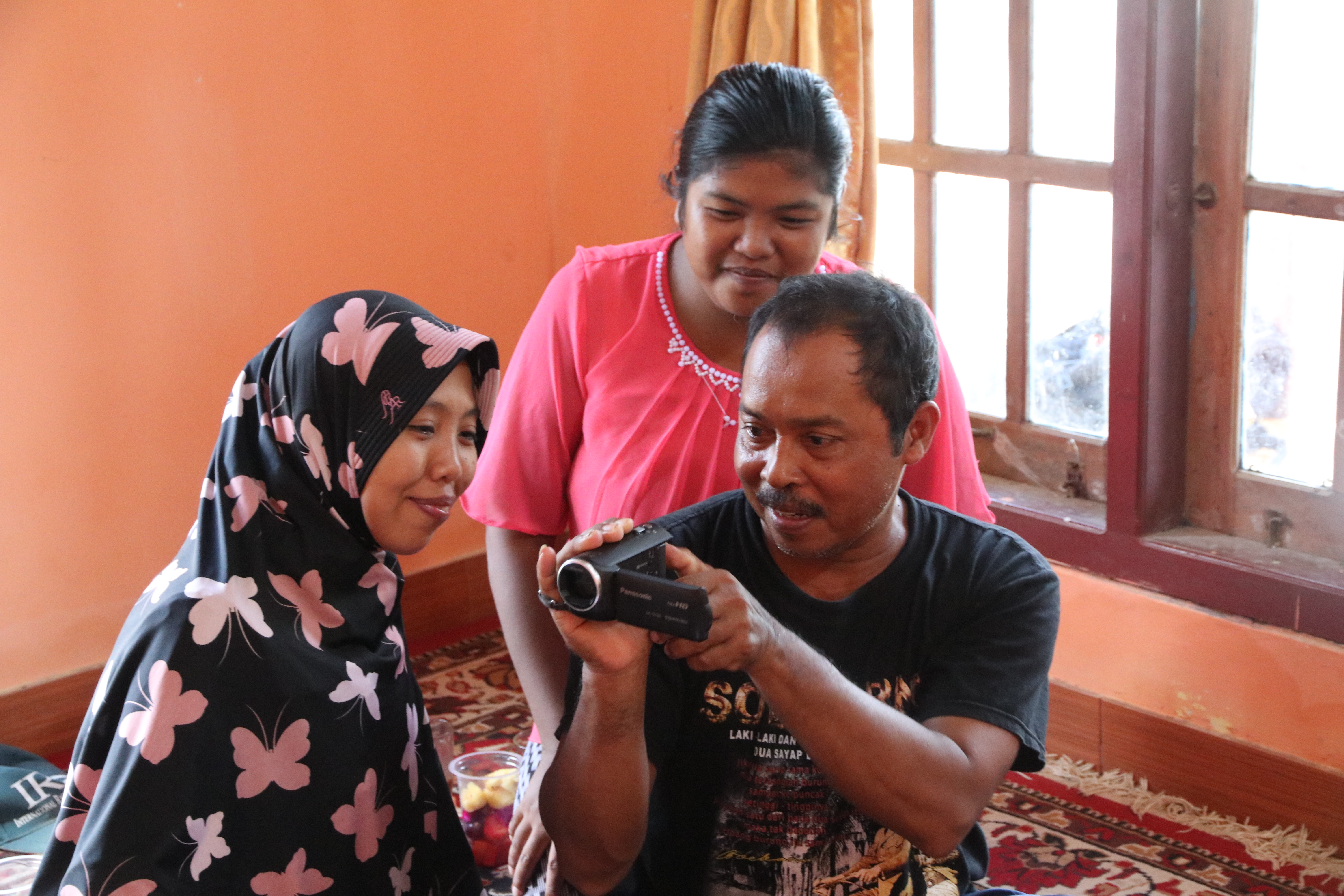 Mr. Wasikin, one of the outstanding farmers in 2016 and a participant in the participatory video training program, continues to produce videos with the help of his daughter and granddaughter. (Photo by R. Quilloy)

Rice is commonly produced in the tidal swamp areas of South Sumatra predominantly as a single annual crop because the dry-season cropping suffers from rat and weed damage and labor shortage. In recent years, best management practices and technologies were introduced through the Assessment Institute of Agricultural Technology (AIAT) to encourage farmers to plant rice more than once a year.

“By rolling out these effective technologies, we can achieve sustainable intensification of rice production in these outer islands,” said Budi Raharjo, AIAT program manager. “We believe more farmers will benefit from the technologies if they hear how they work in a language that is familiar to them. Even more so if these are promoted by farmers who have actually used the technologies.”

Rice intensification in the outer islands of Indonesia, a project of the International Rice Research Institute (IRRI) funded by Give2Asia, invested in building the capacity of farmers and extension workers so that they can lead the continuing process of intensifying rice production by using videos to disseminate new technologies.

Empowering visuals
Building on this idea, communication experts from IRRI and the College of Development Communication at the University of the Philippines Los Baños (UPLB) developed a training program in participatory video production for farmers and extension workers. Twenty farmers and 13 research and extension staff of AIAT-South Sumatra participated in the program and produced their own videos. The farmers were from the tidal swamp areas where best management practices are being promoted by the Closing rice yield gaps with reduced environmental footprint project.

The training consisted of (1) teaching basic skills on video production, including operating a video camera, filming videos, and conducting interviews; (2) developing a storyboard to organize their ideas; and (3) basic video editing. Each village also received a laptop, video camera, audio recorder, and a tripod so that they could produce videos on their own after the training. A year after the training, the trainees collectively assessed the videos they produced and the significant outcomes.

Trainees from the four villages produced eight videos on a range of topics: promoting best management practices and using a drum seeder in sowing, rodent management using a trap barrier system and targeted community actions, and using machinery to overcome the labor shortage.

“We conceptualize the stories together and assign specific roles,” said Saidina Ali, one of the participants, in describing how they organized the village production team. “I was assigned the role of a cameraman. At first, I didn’t even know how to handle a camera. Now, I am the official cameraman of Mekar Sari. I would say that, from having zero confidence, I can now rate myself as an 8 (out of 10) in operating a video camera.”

He shared how they used the skills they gained to produce videos for farmers living in the nearby village of Sumber Hidup. “We were able to help Sumber Hidup to produce a video about their daily farming life,” said Mr. Ali. “The video was shown at a farmers’ congress in Java. I feel happy that I can now do other things like making videos.”

Making an impact from behind the scene 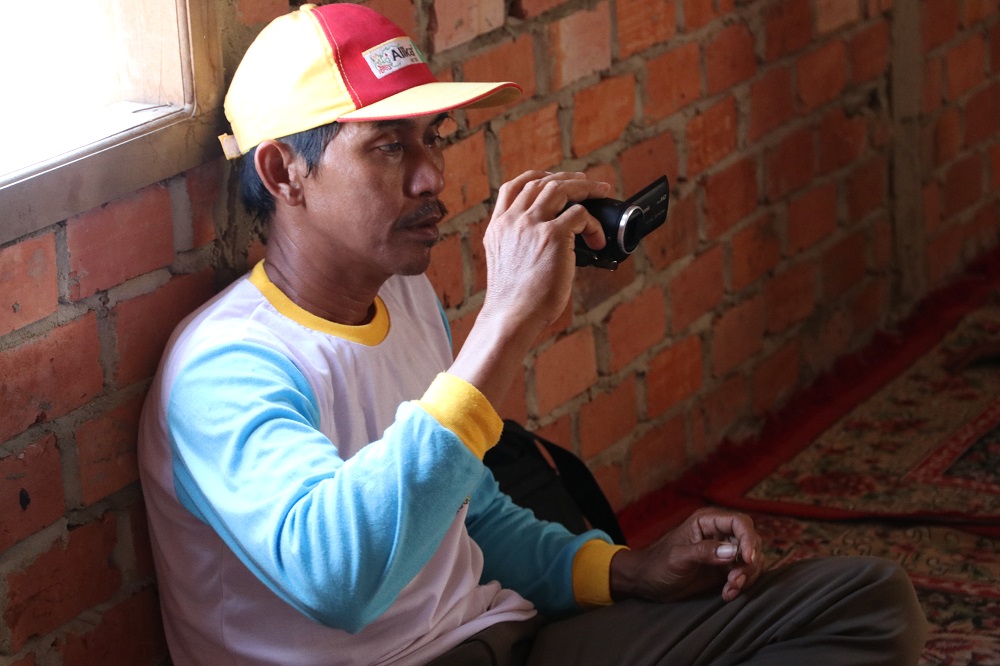 Mr. Ali is a farmer and the official cameraman of Mekar Sari. (Photo by R. Quilloy, IRRI)

“Videos can be a transformative and empowering tool,” said Buyung Hadi, IRRI scientist and the coordinator of Give2Asia. “At IRRI, we have mastered producing videos wherein we explain the how-tos and interview farmers on how they use them. The next step in the evolution of this method is to teach the farmers themselves to produce the videos. I expect that the end product will reflect farmers’ realities better than videos produced by scientists.

This should, in the end, increase the videos’ appeal for other farmers. “It is vital for us at IRRI to realize the multiple ways by which technologies can be disseminated,” Dr. Hadi added. “When we empower farmers and other intermediaries to express and communicate their insights to their peers, we embed a technology in a social network that will, we hope, carry on perfecting and disseminating it.

Raharjo, an extension worker in Air Saleh, found creating videos to be a good tool to help them convey more information by demonstrating important farming practices. “We recently produced a video about a tractor-pulled drum seeder we developed,” he said. “We want to show farmers our latest innovation and how it works so that other farmers could also use it.”

“This initiative is impressive in allowing and motivating the farmers to share best management practices and not merely to comply with project deliverables,” Mr. Budi said. “These farmers choose the topic they want their target audience to see and understand. Videos are one of the most effective tools for sharing best management practices based on their experience so others could learn from them.”

The group also found it useful for them to document farming activities.

“We think we are able to communicate better through videos,” said Mr. Wasikin, one of the participants and a 2016 Outstanding Farmer awardee. “I would like to document my daily farming life so I could inspire others so that they, too, could earn more from farming.”

With support from Give2Asia, some of the videos produced by these farmers were broadcast by TVRI South Sumatra, the local station of the national television network. Technologies such as the trap barrier system to manage rodent infestation and the mechanized drum seeder for crop establishment were showcased during these broadcasts.

Reflecting on the experience, the participants looked back on the video-making program and the outcome of the training. “We want to continue producing more videos, not just for the sake of telling stories,” said the participants. “We also want to show our fellow farmers that we can do more than farming. We can also make videos.”

______________
Ms. Quilloy is a communication and outreach specialist at IRRI. Dr. Hadi is the IRRI country representative for Cambodia and the coordinator of Give2Asia. Ms. Mendoza is an assistant professor in the College of Development Communication, UPLB.