Recent advances with the CRISPR system— the world’s most promising gene-editing tool—could increase the speed of rice breeding. 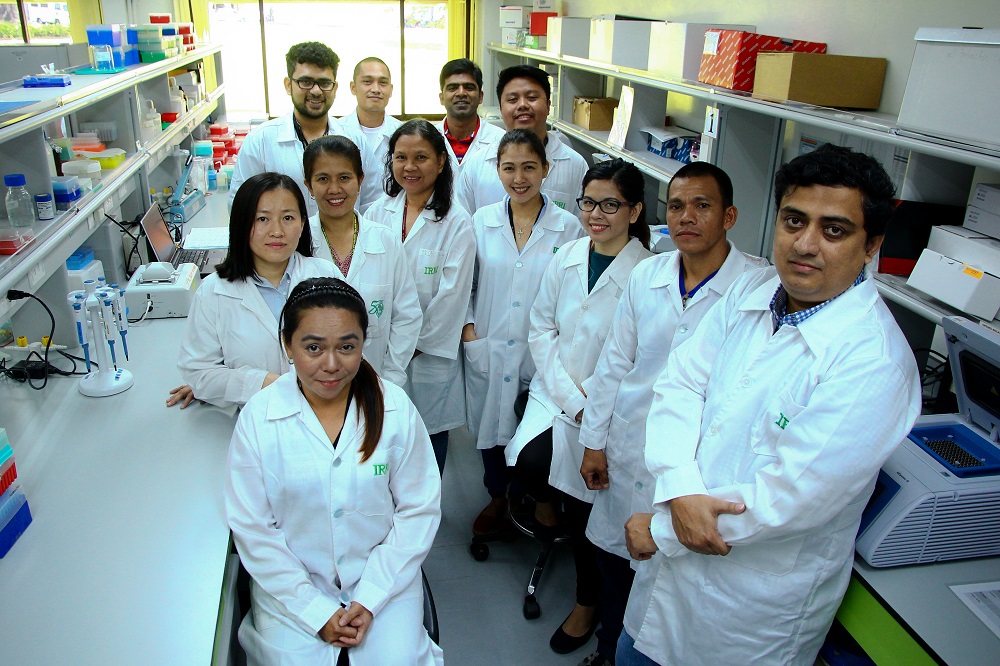 One of the most discussed scientific events in today’s world is the discovery and application of the clustered regularly interspaced short palindromic repeats (CRISPR) system in genome editing. CRISPR is simply a specialized bacterial immune system that scientists have modified into a tool for eliminating or manipulating the set of genetic instructions in animals, plants, and even humans. This tool is easy to use and cheap, which adds more value for this technology for rice scientists working on eliminating or modifying unwanted traits and inserting new traits to improve the crop’s yield, resistance to diseases, and ability to thrive under harsh environmental conditions. 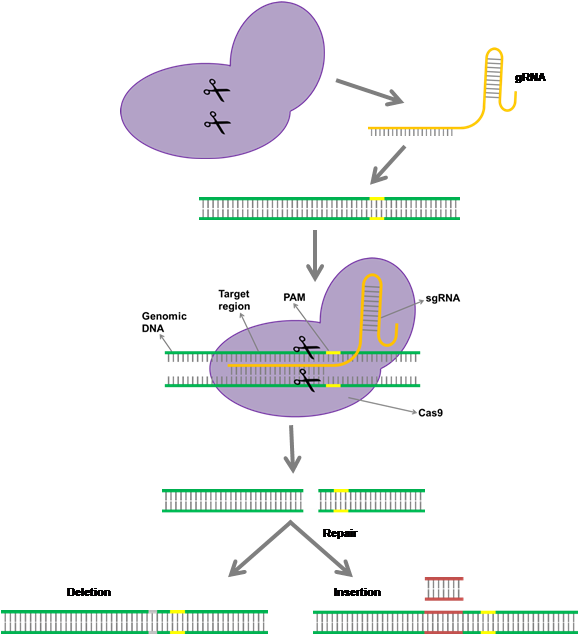 Mode of action of CRISPR-Cas9 (Figure: The C4 Rice Center)

CRISPR 101
The CRISPR system has two components: a guide-RNA (gRNA) and a nuclease (Cas9/Cpf1). The gRNA carries the nuclease to target a certain location in a genome. After the gRNA reaches the target location, the nuclease attached to it can cut the genome at a desired location. This genome-editing process could be used to generate mutations arising from the cell’s attempt to repair itself or introduce a piece of a new gene fragment into the cell.

A yogurt story
The bacteria containing CRISPR were discovered in a very unlikely place: the starter culture used in cheese and yogurt production. In the dairy industry, the starter culture for cheese and yogurt production uses Streptococcus thermophiles, a bacterium that converts lactose into lactic acid. S. thermophiles was prone to viruses (bacteriophage or phage-virus) that infect and spoil the culture. However, some bacteria in starter cultures were found to be capable of resisting bacteriophage attacks. 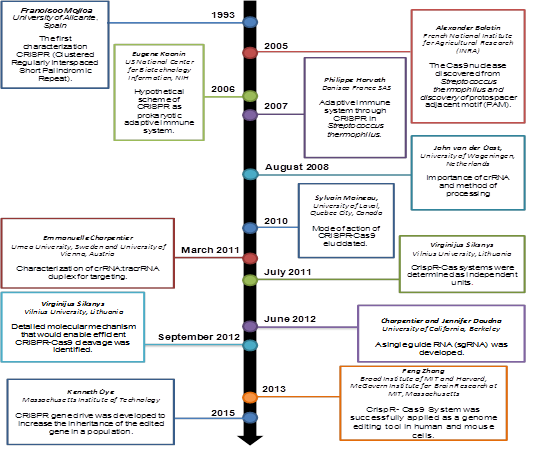 In the mid-2000s, scientists working at a Danish company that makes yogurt cultures traced the nature of the resistance of certain bacteria to the presence of CRISPR arrays in the bacterial genome, initially termed SPIDR (spacer interspersed direct repeats). When the bacteriophage attacks, the bacterium cuts a portion of the viral genome and incorporates it in its own genome in a special area called the CRISPR array. The incorporated bacteriophage genome acts as a guide to resist any subsequent attacks from similar viruses.

The discovery of this specialized immune characteristic of certain bacteria was later found to be extremely useful for genome engineering research. Dr. Jennifer Duodna and her team from the University of California, Berkeley, and subsequently Dr. Feng Zhang’s group from the Broad Institute at Massachusetts Institute of Technology showed, respectively, that the CRISPR system can be used to precisely edit genomes of prokaryotes and eukaryotes. 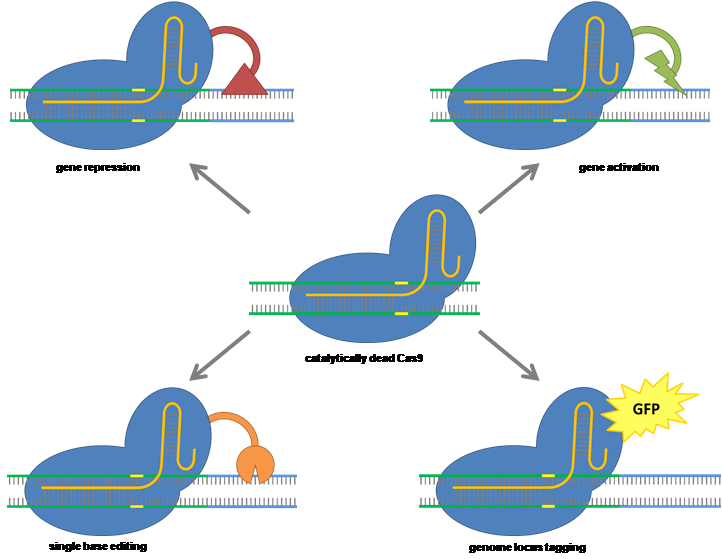 Diverse applications of CRISPR
The CRISPR system is highly versatile in its approach and applicability. With subtle changes in its general makeup, the CRISPR system can be directed to perform a variety of functions related to genome studies other than cutting and splicing DNA and removing and inserting genes.

Scientists discovered that, by changing the structure of Cas9, they could modify its possibility to generate a catalytically dead version of Cas9 (or dCas9) that binds to the DNA double strand but does not manage to cleave it. When an inducer (a molecule that regulates gene expression) is attached to dCas9, it can bind at a particular location in the genome for which a target has been designed and induce the expression of a targeted gene. The same strategy can be used in turning off a targeted gene expression by replacing the inducer with a repressor. This has unprecedented use in gene tagging, screening, visualization, and other possibilities.

By disarming a single domain of Cas9, researchers could create Cas9 nickase (nCas9), which can cleave only a single strand of DNA for varied applications. Recently, specialized enzymes (cytidine deaminases) are being added to the dCas9, which can even edit at the single nucleotide level and can alter SNPs (single nucleotide polymorphisms).

One recent major development in the CRISPR toolbox is the application of purified Cas9 protein with a gRNA known as RNP (ribonucleoprotein), which can target the rice genome. As purified Cas9 is devoid of any foreign DNA, the mutants generated are completely free of genetic materials from unrelated species. Scientists are also trying to improve the delivery of this RNP system via nano material-mediated cargo delivery. Ongoing research in this direction will soon refine this method for regular use.

CRISPR and the rice challenge
As we know, rice is one of the most widely consumed and cultivated cereal crops in the world and has great economic and cultural importance for a large portion of the global population. It was inevitable that a research area as exciting and groundbreaking as CRISPR-based genome editing would find application in rice science. 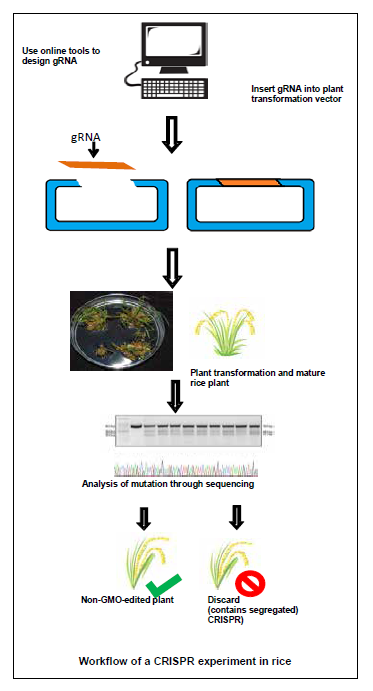 Although genome editing in rice was already being practiced using other technologies, the CRISPR-Cas system provided unprecedented control and precision in creating targeted mutations in the rice genome. The CRISPR method could induce mutations with a very high efficiency. The focus soon shifted to the application of the CRISPR tool for the betterment of the rice crop as research moved toward the applied aspect of genome editing. In this regard, significant strides have been made toward improving rice and its traits.

The development of male sterile lines that are both light- and heat-sensitive was completed and validated using CRISPR. This development will be a massive boost to breeding because male sterile lines are important for rice breeding and hybrid development and the traditional method of creating male sterile lines is quite cumbersome. Similarly, the CRISPR system has been used to develop rice lines that are more resistant to rice blast, a serious disease that destroys approximately 30% of global rice production. A private research company has also developed herbicide-resistant rice lines with the help of the CRISPR-Cas9 system. Rice scientists are also looking at using the system to target multiple genes at the same time, resulting in newer traits in a single cultivar using fewer generations.

Interestingly, the mutations induced by the system are carried forward to successive generations and the CRISPR-Cas9 system gets segregated out. Thus, the mutants obtained are similar to mutationally bred nontransgenic crops with no genetic materials from unrelated organisms.

A promising toolbox
Our knowledge of the potential applications and repertoire of tools in the toolbox for tweaking genomes and creating targeted mutations is expanding day by day. For example, an enzyme alternative to Cas9 has been identified and has been successfully applied as an additional editing tool for rice. Known as Cpf1, it enables scientists to target locations in the rice genome inaccessible to Cas9, thus expanding the available targeting potential. 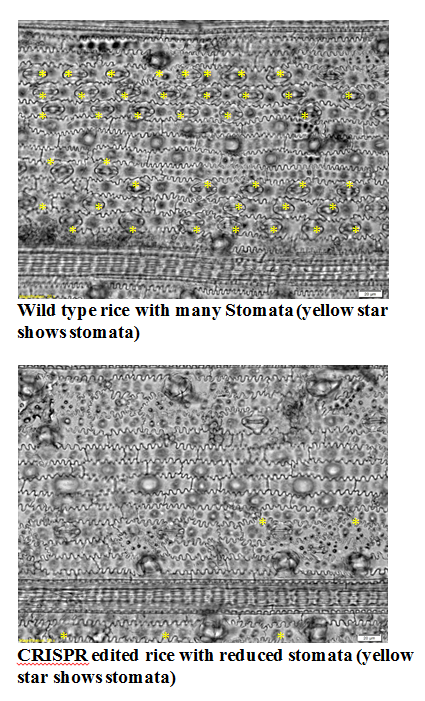 At the International Rice Research Institute (IRRI), the first report for using the CRISPR system in rice was published by the molecular editing team in the C4 Rice Center in early 2017. The team used Cas9 and Cpf1 to edit the OsEPFL9 gene, which determines stomatal formation and patterning, and create a mutation that causes OsEPFL9 to lose its functions. Both Cas9 and Cpf1 were successfully used to edit the gene in question and create mutants. The mutants showed an 8-fold reduction in the number of stomata compared with that of a normal type. Manipulating the number of stomata, the tiny pores used by plants for gas exchange and transpiration, could improve the rice crop’s efficiency in using water. Further research in this area is ongoing and would be helpful in rolling out rice varieties with a stronger ability to survive droughts because of the more efficient use of the water stored inside the plants.

Other research activities at IRRI are also using CRISPR to manipulate other traits in rice to develop varieties that can withstand environmental stresses and pests and diseases, contain higher nutrients, and produce better grain quality. The system is also useful in developing double-haploid rice, which provides greater breeding efficiency. Clearly, the future of CRISPR and its application in rice for generating newer, better varieties of rice, the crop that feeds four billion people globally, is truly very promising.