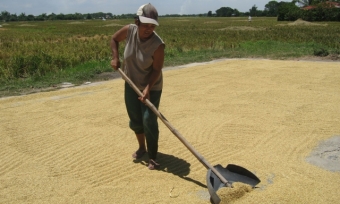 In 1989, Marcelino Castañeda and his wife, Leticia, used their savings from rice farming to buy a bull, which they sold after a year. From their earnings, they bought two calves, a male and a female, for breeding. At that time, fodder for livestock and grazing fields was still abundant. Gradually, they were able to increase their herd to 20 cattle. One of the major assets they purchased from the sales of their cattle was a 1,428-square-meter residential lot in a village.

For 15 years now, since she started rice farming in Guimba, Nueva Ecija, on the island of Luzon, Philippines, Leticia has been leading a group of 15 women and 5 men farmers in off-farm transplanting. For the first 2 years, they engaged in suyuan, an exchange labor system, in which groups of farmers agree to work on each other’s farm by turns for free.

“We work all day long and we transfer from one field to another,” Leticia said. “Aside from the cash benefits, I gained the trust and respect of the members, which I repay by doing my part in looking for other farmers who need our services.

“I also provide the members’ cash advance—usually a month before the transplanting job,” she narrated. “They use this cash to pay for their children’s tuition fees. Since we are paid immediately after we transplant, and sometimes even in advance, the members are able to pay back the money they borrow.”

Putting eggs in other baskets

In 2006, the couple also started cultivating onions on their 3.25-hectare farm. They were lucky that year because they earned about PhP80,000 ($1,920), some of which they used to buy a motorcycle. Later on, they added a sidecar to transform it into a tricycle for hire— an additional source of income for the family. Because of a good harvest and a good price for onions, they were able to earn more profits, which they used to buy a power thresher.

Unfortunately, bad weather in 2007 caused losses in their onion production. “I realized that onions are sensitive to changes in the weather during the summer months,” Leticia recounted. “Since then, we stopped planting onions.

“Although rice production is less profitable than onion production, rice gives us food security throughout the year,” she added.

In 2008, they went back to planting rice during the wet and dry seasons.

Initially, they used a diesel-fueled water pump to supplement the primary source of irrigation. But, in 2009, when irrigation facilities were installed in their village, irrigation water from the canal reached their fields. Irrigation and the assurance of a continual water supply brought about a lot of changes not only for the members but also for the entire farming community.

“On our farm and in neighboring villages, transplanting is done simultaneously because of this irrigation,” she said. “Farmers grow two crops of rice, thus increasing the demand for the transplanting crew during the dry season.

“Now, my husband, my children, and I are engaged in rice farming and the total rice area that our family is working on is 7 hectares,” she disclosed. “Although my children live in separate houses, we all help one another.

“Aside from our farm income (sales from rice and livestock), our daughter’s remittances from Manila help us buy farm inputs at the right time,” she said, accounting for other sources of their income. “As a wife and mother, I manage our budget quite well. I save and allot budget for farm inputs and for the mortgage of our lands.”

Good farm management, hard work, and available capital to buy farm inputs are necessary for profitable farming, she indicated. “Most of all, we keep on farming because it is our food security for the whole year,” said Leticia. “My husband and I believe that all our children will not abandon rice farming because it has given us a good life. We believe that there is hope for a better life through rice farming.”