The international program of the Institute has, as its main objective, the dissemination of ideas and materials. The research scholars in training at the Institute will carry new thoughts and, hopefully, new vigor to already existing programs on their return to their countries. The international symposia bring the working scientists together for a thorough review of existing knowledge in a given field of specialty and the exchange of ideas on a person-to-person basis. The cooperative research projects that the Institute has inaugurated throughout Southeast Asia serve to determine whether practices that have proved successful at Los Banos can be employed in other localities. 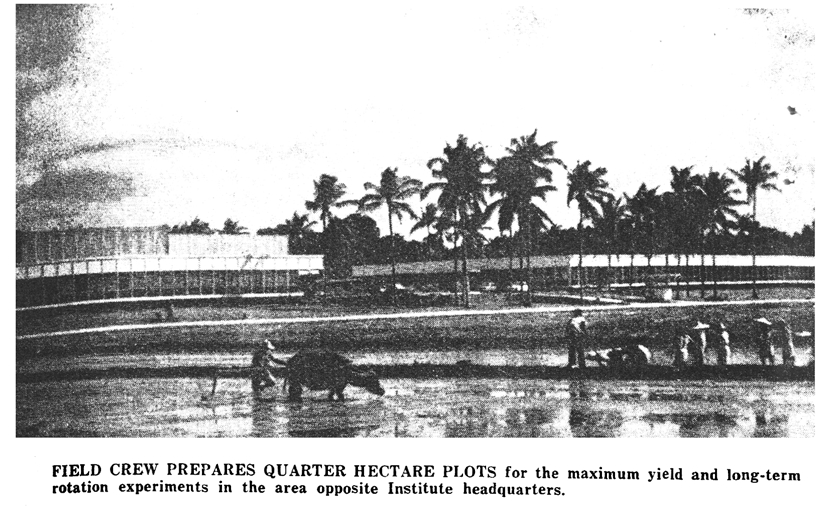 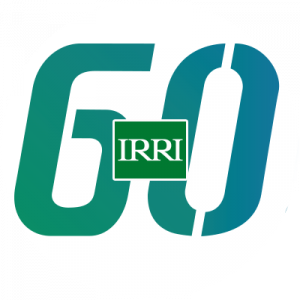 Institute scientists, fully aware of the low average yields in the tropics, direct the bulk of their research toward gaining an understanding of why productivity is low and of how it can be increased.

Although such factors as poor weed, insect, and disease control, unsatisfactory cultural methods, and poor soil management practices influence the low productivity, it appears that the most important single factor is the lack of varieties of rice that are adapted to the soil and climatic conditions of most tropical countries. Specifically, the typical indica rice varieties grown in the tropics are tall, heavy- tillering, photoperiod sensitive, and late- maturing. They are susceptible to severe lodging when even moderate amounts of” nitrogenous fertilizers are applied. 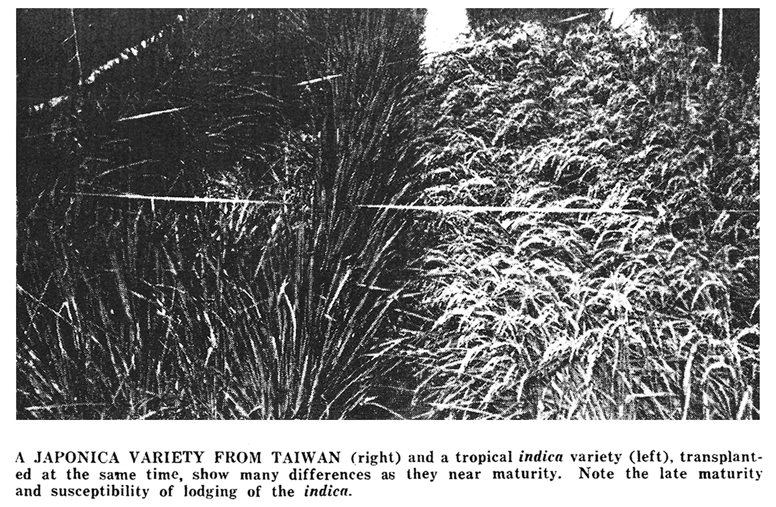 Although it will require several years to develop satisfactory varieties, Institute.”‘ plant breeders have undertaken a comprehensive breeding program designed to produce varieties that will be short, stiff- strawed, non-lodging, responsive to nitrogen, early maturing, non-photoperiod sensitive, and disease resistant. In addition, these new varieties must have the eating and cooking characteristics that rice-eating people of southeast Asia prefer. It seems evident from experience at the Institute and elsewhere that a breeding program can produce this type of rice plant and that the capacity of such a plant to produce grain can exceed that of many varieties now grown in the tropics.

The higher rice yields recorded in the various tables and graphs in this report range from 6,000 to more than 8,000 kilograms per hectare. This performance demonstrates that high yields are possible in the tropics. In all instances, these high yields were obtained on plots where either the rice did not lodge at all, or where it did not lodge until just before the grain reached maturity. The absence of lodging resulted either from the fact that a short, stiff-strawed, early-maturing variety (such as one of the pon!ai varieties) was used, or from the fact that the rice was grown during the dry season when the tillering rate and height growth were retarded, even though these same varieties lodged severely when grown in the rainy season. The promising results obtained by the use of systemic insecticides for the control of the rice stem borer deserves mention. If later results confirm the earlier findings that a single application of a systemic insecticide placed in the irrigation water will control the rice stem borer as satisfactorily as 10 foliar applications of certain other types of insecticides, surely a real economic advantage would result. The important fact is that, in several instances, the application of either foliar sprays or systemic insecticides increased the yield in excess of 2 metric tons per hectare.

The rice blast disease is ubiquitous, being present to some degree in all rice-producing regions of the world. During recent years it has become more prevalent, and new physiological races have developed or at least have been identified. 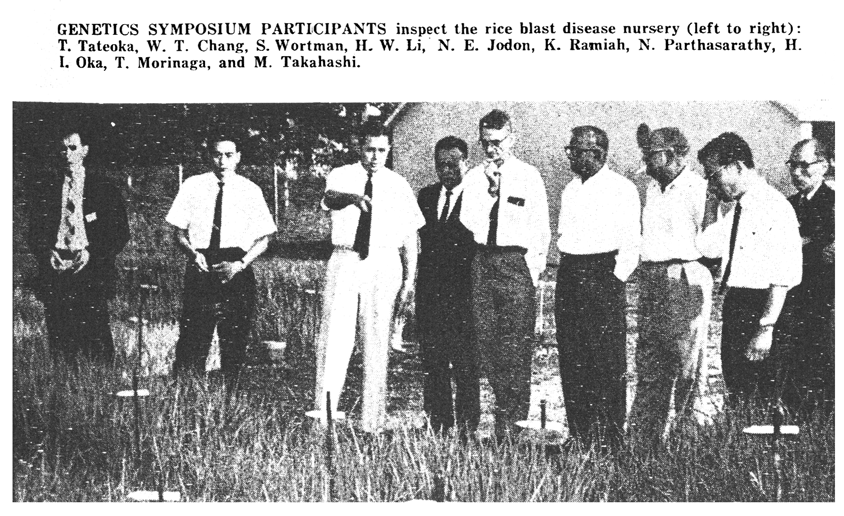 The Institute has accepted the responsibility of leading an international project to establish in 15 or more countries some 40 Uniform Rice Blast Disease Test Nurseries to identify sources of blast resistance and to develop an international set of differential varieties for the identification and classification of the physiological races in different countries. This project continues and expands the FAO Uniform Blast Nursery project.

The Institute’s thorough investigation of the chemistry of flooded soils merits attention. The dynamic nature of flooded soils is well demonstrated by the fact that such properties as pH and the contents of ferrous iron, manganese, and ammonia change markedly when a soil is either flooded or drained. The reasons for the better growth of rice on flooded soils, as compared to its growth on non-flooded soils, have become dearer as a result of these investigations.

The fact that the protein content of polished rice varies more than 100 percent from the lowest to the highest values may be of real importance from the standpoint of the nutrition of the rice-eating peoples of the world. During the next few years, the Institute scientists hope they can determine more specifically the reasons for the high protein content of various samples and can demonstrate how high levels can he consistently obtained.

If the Institute’s program is to have an impact throughout the rice-growing regions of the world, the results of this program must be tested in many other localities. Furthermore, it is hoped that the research data and the discussions presented in the annual report and other documents will stimulate other countries to place greater emphasis on rice research than has been true in the past. The job is too big to be done by one agency.

The international program of the Institute has, as its main objective, the dissemination of ideas and materials. The research scholars in training at the Institute will carry new thoughts and, hopefully, new vigor to already existing programs on their return to their countries. The international symposia bring the working scientists together for a thorough review of existing knowledge in a given field of specialty and the exchange of ideas on a person-to-person basis. The cooperative research projects that the Institute has inaugurated throughout Southeast Asia serve to determine whether practices that have proved successful at Los Banos can be employed in other localities.

The Institute’s total research effort encompasses all phases that appear to have any significant bearing on rice production. With such a comprehensive and well-integrated program, the Institute is confident that during the next few years it will make truly significant contributions to the understanding of those factors which affect rice yield and quality under tropical conditions.