Even as we continue to promote farmer education on IPM principles and knowledge, it is important to start paying attention to the amount of investment sustaining other pest management options. 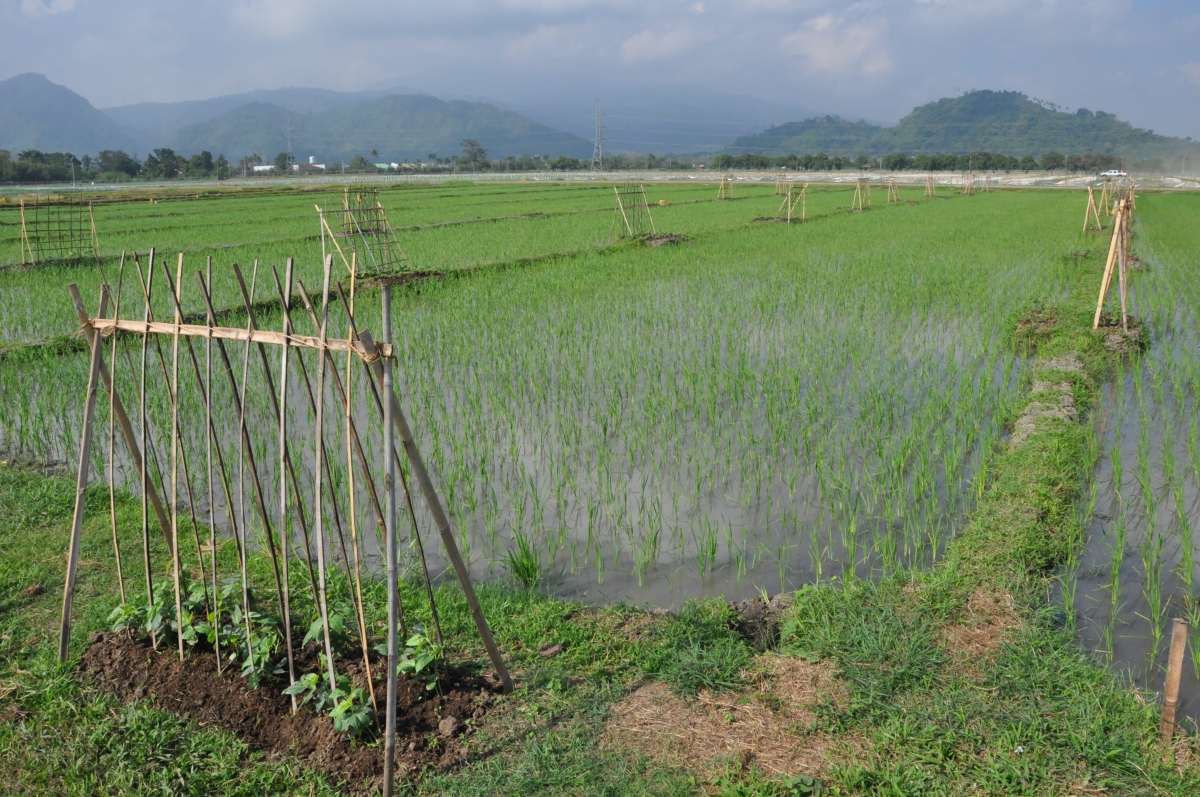 IPM in action: Planting flowering plants around rice fields have been shown to conserve natural enemies and improve natural pest regulation so that insecticide use can be limited to occasions in which they are absolutely necessary (Photo by Sylvia Villareal, IRRI).

The evidence is mounting. If you drive through rural Southeast Asia between nine and eleven o’clock in the morning and roll your window down, you are likely to smell something synthetic in the air. Out in the fields, rice farmers are spraying insecticides.

Most Asian countries are importing an ever-increasing amount of pesticides. Food and Agriculture Organization of the United Nations data showed that Indonesia, Vietnam, Thailand, and India at least tripled their pesticide import values between 2000 and 2010. Many of these pesticides are used for rice production. The frequency of insecticide application in Java in Indonesia is among the highest in Southeast Asia.

Pesticide treadmill
For Asian farmers, insect pest outbreaks are characterized by uncertainty and surprise. Climate change aggravates the intensity of these uncertain events.

Southeast Asia is experiencing increasing occurrence of strong storms. In the wake of the storms, portions of rice fields are destroyed and sometimes replanted. A repeated cycle of replanting creates a large patchwork of asynchronous rice plots that provide a continuous resource for pest population buildup and lead to outbreaks. In the face of this challenge, many smallholder farmers choose the prophylactic application of insecticide as a way to prevent loss.

The cheap, often subsidized price of insecticides encourages this behavior. Insecticide overuse accelerates the development of resistant pest populations, which, ironically, necessitates an ever-increasing amount of insecticide to be applied in the fields. Some call this the “pesticide treadmill” and it is a costly treadmill to be on, both financially and in terms of human and environmental health. A series of ill-health syndromes associated with pesticide exposure, including severe eye irritation and respiratory health problems, have been documented among Asian rice farmers. When the health problem costs are factored in, prophylactic use of insecticide yields very little or even no profit for farmers.

Natural pest regulation
How did we reach this situation in which an unsustainable practice of overusing a single pest management option becomes the norm? Furthermore, this situation flies in the face of decades of promoting integrated pest management (IPM), a concept that emphasizes the integration of various pest management options, including host-plant resistance and biological control as well as chemical pesticides, across rural Asia. Indeed, some cynics point out that IPM really should stand for integrated pesticide management to reflect the current reality.

The conundrum is especially baffling since integrating various pest management options has been shown to work in the Asian rice context. Take the story of conservation biological control, for example. As one travels across rural China or Indonesia, the custom of planting rice bunds with various economic crops is quickly apparent. Sesame is commonly seen on the rice bunds of Zhejiang Province in China while various beans are planted by the rice fields of Yogyakarta in Indonesia. This practice may have started as a poor household strategy to squeeze the utility of idle land for subsistence food production.

Interestingly, increasing habitat diversity around rice fields by planting different vegetation on the bunds has been shown to also conserve the natural enemies of rice pests. Rice pests are constantly hunted by various other insects and spiders. Mirid bugs, for example, prey on pest species while tiny Trichogrammatid wasps parasitize pest eggs across Asian rice fields.

Rice pests are the major protein sources for most of these natural enemies, yet they also need plant-derived sugar and micronutrients to complete their dietary needs. Research conducted at the International Rice Research Institute (IRRI) and elsewhere in Asia showed that natural enemies lived longer and consumed more pests in the presence of bund vegetation that provides them with food and shelter. Consequently, the pest populations in fields with diverse bund vegetation are relatively lower and more stable than in fields with clean bunds.

When farmers experimented with the technique, the natural pest regulation in their fields was clear enough that they decided to reduce pesticide application without being prompted to do so. This shows that conserving natural enemies does improve natural pest control to the point that pesticide use can be limited to situations for which the pesticide is really necessary. 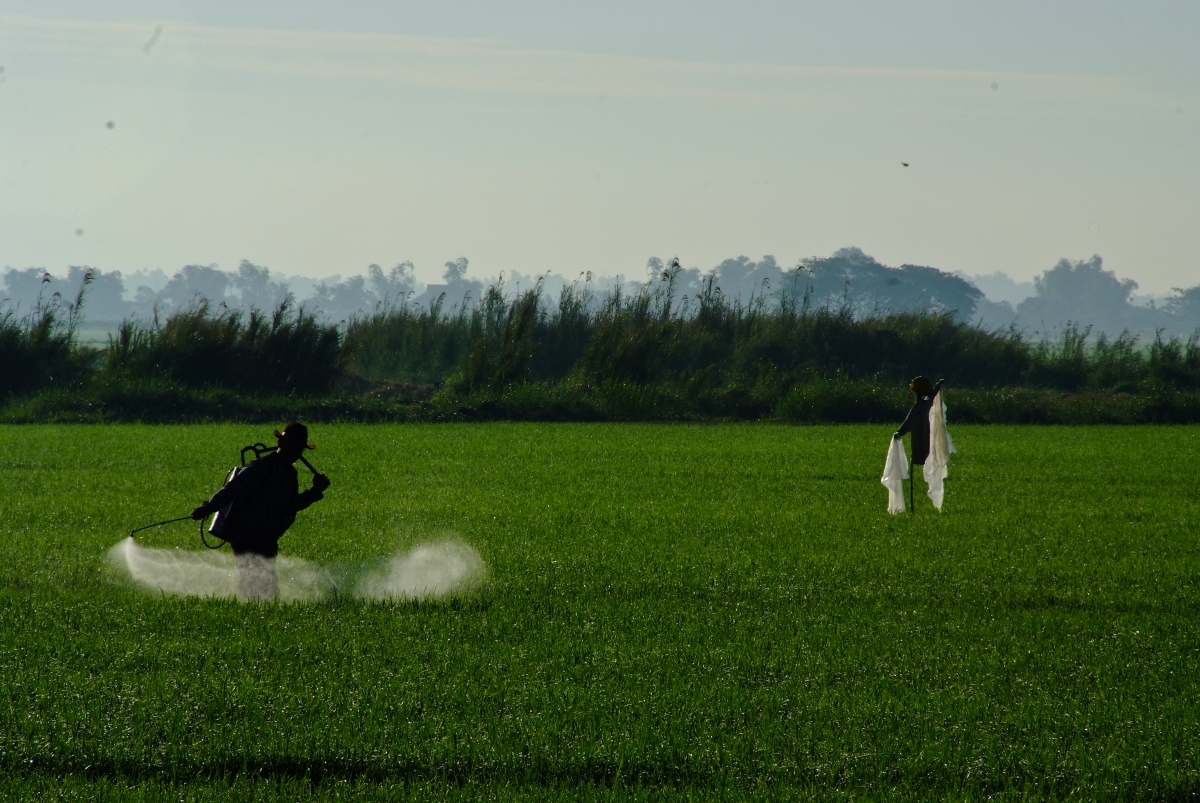 Farmers in Southeast Asia are experiencing increasing occurrence pest outbreaks and choose the prophylactic application of insecticide as a way to prevent loss. (Photo by Chris Quintana, IRRI) 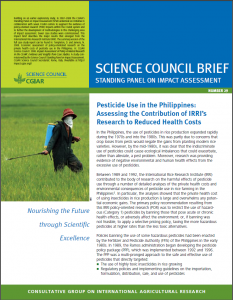 In the Philippines, the use of pesticides in rice production expanded rapidly during the 1970s and into the 1980s partly due to concerns that crop losses from pests would negate the gains from planting modern rice varieties. However, by the mid-1980s, it was clear that the indiscriminate use of pesticides could cause ecological imbalances that could exacerbate, rather than alleviate, a pest problem. Moreover, research was providing evidence of negative environmental and human health effects from the excessive use of pesticides. Between 1989 and 1992, IRRI contributed to the body of research on the harmful effects of pesticide use through a number of detailed analyses of the private health costs and environmental consequences of pesticide use in rice farming in the Philippines. The analyses showed that the private health cost of using insecticides in rice production is large and overwhelms any potential economic gains. The primary policy recommendation resulting from this IRRI policy-oriented research was to restrict the use of hazardous pesticides by banning those that pose acute or chronic health effects, or adversely affect the environment; or, if banning was not feasible, to apply a selective pricing policy, taxing the more hazardous pesticides at higher rates than the less toxic alternatives. Read the full CGIAR report.

Sustaining IPM
So, if integrating pest management options actually works in the field, why don’t we see this practiced more often? Perhaps the problem lies in the amount of investment involved in researching and promoting options other than pesticide. Indeed, among all of the major options for pest management (e.g., host-plant resistance, conservation and augmentative biological control, as well as pesticide), pesticide commands the largest industrial value.

The Asia-Pacific chemical pesticide market was estimated at USD 15.4 billion for 2017. Compare this with the biological control (biopesticide) market in the same region that was estimated at USD 1.26 billion for 2016. Most of the investment to introduce resistance genes into elite rice varieties comes from public funding and is nowhere near the numbers for biopesticide, let alone chemical pesticides.

It is often assumed that the key to a more sustainable practice in pest management is more information: if only farmers are equipped to make informed decisions, they will. This assumption fuels efforts such as the farmer field school and entertainment education campaign.

This might have worked if the playing field were level: that is if all pest management options had equal amounts of research and promotion behind them. In reality, even as farmers are steeped in IPM information, sometimes the only real option that seems available is pesticide as the other options are either absent in the market or drowned by the din of strong promotion backed by large industries.

Thus, even as we continue to promote farmer education on IPM principles and knowledge, it is important to start paying attention to the amount of investment sustaining other pest management options.

Public funds will need to strategically flow into the inclusion and promotion of resistance genes in elite varieties. Market mechanisms should be used to prop up other options such as conservation and augmentative biological control. This will include policy work across the region to allow for registration, trade, and quality control of biopesticides.

SRP and IPM
It is interesting to note that, in some countries, it is possible to register older pesticides with known health risks while no legal procedure is available for the registration of commercial biological control. Another avenue worth pursuing is to create incentives for farmers to exhaust other nonchemical options such as the deployment of resistant varieties and usage of biocontrol options before pulling the trigger on chemical pesticides.

This is exactly the gist of pest management standards under the Standard Rice Platform (SRP). Level the field and farmer education will work better. Perhaps then we will see rice IPM in practice, and I’m not talking integrated pesticide management.
_____________________
Dr. Hadi is an entomologist at IRRI.