Rice-growing countries in Asia are moving toward the development and implementation of concrete mitigation programs to reduce the environmental footprint of the rice sector. 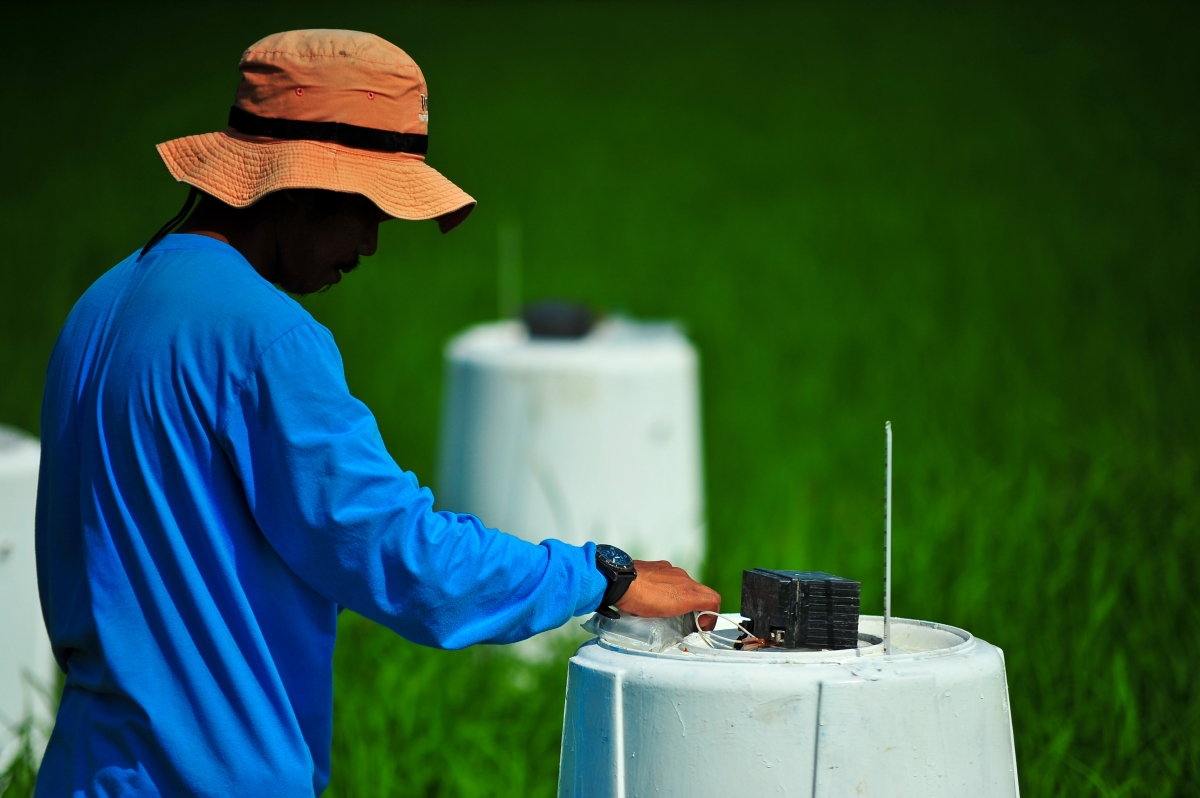 Collecting data about the potential of AWD technology mitigating GHG emission in the Philippines. (Photo by Isagani Serrano, IRRI)

Despite a few setbacks, global climate agreements continue to tread on a positive path with more nations signifying official support for the Paris Agreement. However, although many countries are moving toward the implementation of concrete mitigation programs, there is a clear underrepresentation of the agricultural sector, especially in the rice-growing countries of Asia.

One possible mechanism to reach scale in implementing mitigation technologies is through Nationally Appropriate Mitigation Actions (NAMAs), one of the agreed outcomes from the Bali Action Plan concluded at the Conference of the Parties 18 in Doha, Qatar, in 2012.

NAMAs refer to any initiatives by developing countries, through government agencies such as agriculture ministries, to reduce greenhouse gas (GHG) emissions. These can be policies directed at transformational change within an economic sector or actions across sectors for a broader national focus, according to the United Nations Framework Convention on Climate Change. NAMAs are supported and enabled by technology, financing, and capacity building aimed at reducing emissions relative to projected emissions in 2020 without these policies.

Funding for NAMAs could come from different sources, ranging from national budgets to bilateral donors or international funding agencies. This funding mechanism has been discussed at various climate change conferences since 2007, but the number of NAMA projects lags behind expectations. This led to the formation of new funding agencies such as the Climate and Clean Air Coalition (CCAC) and the NAMA Facility that support the design and implementation of eligible projects. The NAMA Facility conducts open competitive calls to identify the most ambitious, feasible, and transformational proposals for funding.

The need for a Rice NAMA
Globally, agriculture contributes 10‒12% of GHG emissions. But, emissions are higher in most Southeast Asian countries because of rice production. Although climate change affects rice production, rice production could play a role in curtailing global warming; hence, the significance of NAMAs for rice production.

The International Rice Research Institute (IRRI) is currently developing a NAMA prototype for Thailand’s rice sector with the Thai Rice Department, Deutsche Gesellschaft für Internationale Zusammenarbeit (GIZ), the Sustainable Rice Platform (SRP), and other public- and private-sector partners. This consortium was selected by the NAMA Facility for developing a full proposal for the funding of a Detailed Preparation Phase (DPP).

Within the DPP, IRRI’s tasks comprise assessing GHG emission savings under different mitigation scenarios and technical backstopping on the implementation of alternate wetting and drying (AWD) technology in combination with laser land leveling and other crop management options.

“The Thai Rice NAMA concept was received favorably,” said Dr. Reiner Wassmann, IRRI’s climate change coordinator. “It focuses on applying AWD and the SRP standard and was suggested to consider the more technical options of crop management as a means to maximize the mitigation effect. We have teamed up with our colleagues from the Postharvest and Mechanization Unit to ensure technical expertise on laser leveling, straw management, fertilizer spreading, etc.” 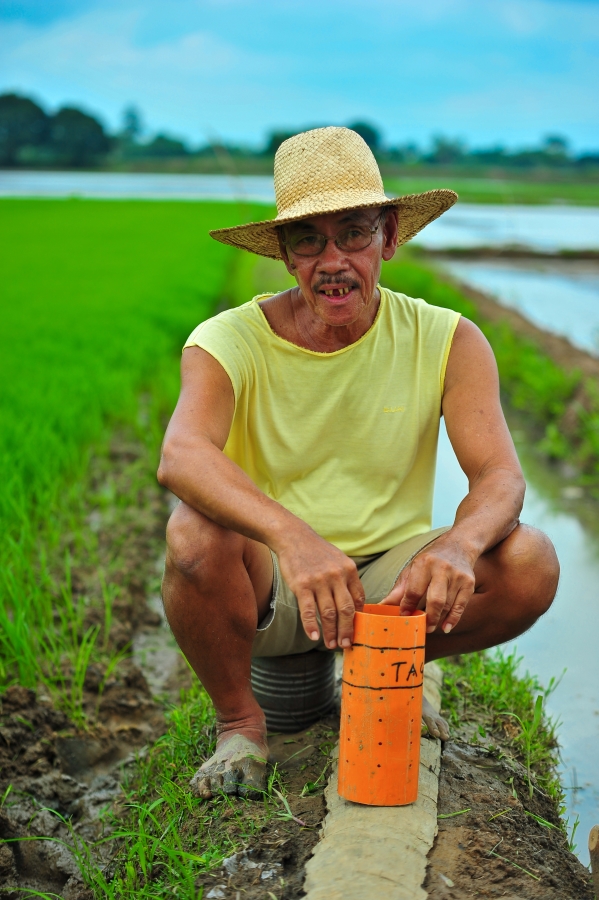 A Filipino farmer is set to use an AWD pipe in his rice field. AWD enables farmers to save on irrigation water by up to 30% and reduces methane emissions by 30‒70% without yield loss. (Photo by Isagani Serrano, IRRI)

Other mitigation initiatives
The IRRI project on Mitigation options to reduce methane emissions in paddy rice provides technical support and guidance to policymakers in Vietnam and Bangladesh for implementing GHG mitigation technologies. Funded by the CCAC with support from the CGIAR Research Program on Climate Change, Agriculture, and Food Security (CCAFS), this project aims to provide the foundation for future NAMA or NAMA-like projects for the rice sector.

“The CCAC Paddy Rice project focuses on the outscaling of AWD technology in Vietnam and Bangladesh through support from national plans with geo-spatial information,” explained Ole Sander, climate change scientist at IRRI.

AWD technology, which was developed by IRRI and its partners, addresses the twin problems of adaptation and mitigation through efficient water management. It enables farmers to save on irrigation water by up to 30% and reduces methane emissions by 30‒70% without yield loss. This water-saving approach was also incorporated in the SRP standard that was designed to ensure the sustainability of rice production systems.

Recognizing the well-established benefits of using AWD, two consortia in Vietnam and Bangladesh and their respective agriculture ministries developed a work plan with IRRI for scaling out AWD in rice.

“Our national partners in both countries are strongly engaged in developing region-specific strategies for scaling out mitigation options in rice production,” said Dr. Sander. “Collaboratively, we are developing solutions for specific local problems and bottlenecks.”

Bangladesh has set a goal to scale out the use of AWD in 20% of all its rice cultivation.

In Vietnam, AWD is considered one of the key GHG emission mitigation technologies; thus, the aim for widespread adoption on up to 0.5 million hectares of rice paddy by 2030 is supported by the country’s National Development Council implementation plan.

To facilitate information sharing, IRRI set up an online knowledge hub, where information on an array of mitigation technologies and practices can be accessed.
Moving forward

IRRI intends to establish a “Rice NAMA Clearing House” in its Vietnam office. To this end, IRRI organized an initial Stakeholder Workshop on climate change policies in Hanoi in June 2017 to discuss the Rice NAMA plans in Vietnam.

“The Clearing House will serve as a one-stop information platform for technical advice and collaborative engagement as we steer forward NAMA-related programs and projects in Asia,” said Dr. Sander.