Conservation agriculture has a vital role to play in sub-Saharan Africa’s food security for a population projected to rise to 2 billion by 2050. 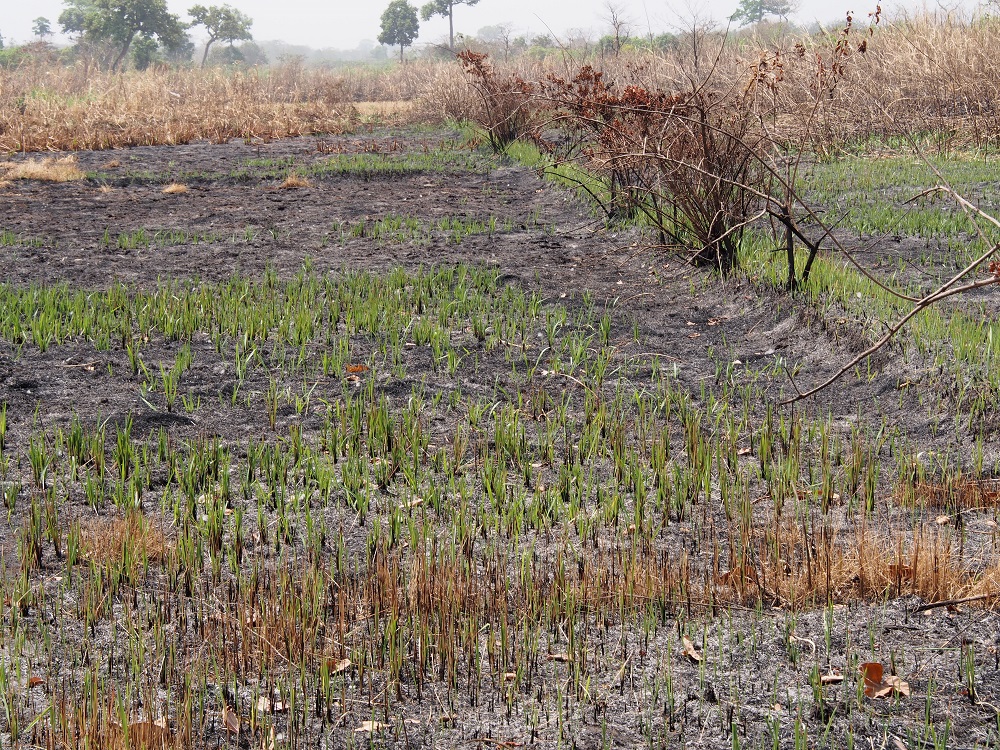 In West Africa, many farmers lose their crops every year to bushfires that occur in the dry season. (Photo by R.Raman, AfricaRice)

It is the harmattan season when dry, dust-laden winds from the Sahara Desert sweep across West Africa.

“As you can see, we had almost no rainfall here,” said Kouakou Ali, a technical assistant at the Africa Rice Center (AfricaRice), pointing to a landscape of devastation caused by bushfires, near the rice fields in M’bé in Côte d’Ivoire. In 2016, Côte d’Ivoire experienced the worst harmattan in three decades.

Farmers in rainfed drought-prone areas are increasingly vulnerable to agricultural risks from a changing climate. According to environmental experts, climate change threatens to turn vast areas of productive land in Africa into dust bowls, leading to widespread hunger and migration of rural populations on a much bigger scale than the Dust Bowl that devastated North America in the 1930s.

Lessons from the Dust Bowl
Caused by severe drought and unsustainable dryland farming practices, the Dust Bowl taught hard lessons that motivated a fundamental change in the mindset of some agricultural experts to move away from intensive tillage-based agriculture, which was found to accelerate soil erosion in dryland systems, to an approach called “conservation agriculture.”

Conservation agriculture is a set of soil management practices that are based on three principles: (1) maintaining organic matter cover over the soil throughout the year using cover crops and intercrops and/or mulch provided by crop residues, (2) minimizing soil disturbance by tillage and seeding directly into untilled soil, and (3) diversifying crop rotations and associations, including nitrogen-fixing legumes.

A promise for Africa
Some of the principles of conservation agriculture are not new to Africa. Smallholder farmers traditionally grew cowpea or groundnut, in rotation with cereals or as intercrops, and then left their land fallow for several years to restore soil fertility. But, with high population pressure, the fallow periods have become shorter and the cropping periods longer.

As a result, soil fertility and crop yields have declined drastically. In some areas, the soil has become so dry and hard that even the rains bring little relief for farmers as the water runs off, taking the precious topsoil with it. It is reported that about 65% of the arable land in Africa is already degraded and several countries are facing critical food shortages.

Sustainable farming practices such as conservation agriculture have a vital role to play in sub-Saharan Africa, where the population is projected to rise to 2 billion by 2050. With increasingly scarce resources, it is critical for the region to abandon farming practices that mine the soil and adopt those based on resource-use efficiency and conservation of natural resources.

Keeping this in mind, the Food and Agriculture Organization of the United Nations, the New Partnership for Africa’s Development, the Alliance for a Green Revolution in Africa, the African Conservation Tillage Network, French Agricultural Research for Development (CIRAD), and CGIAR Research Centers and Programs, among others, are investigating the potential of conservation agriculture approach in Africa. 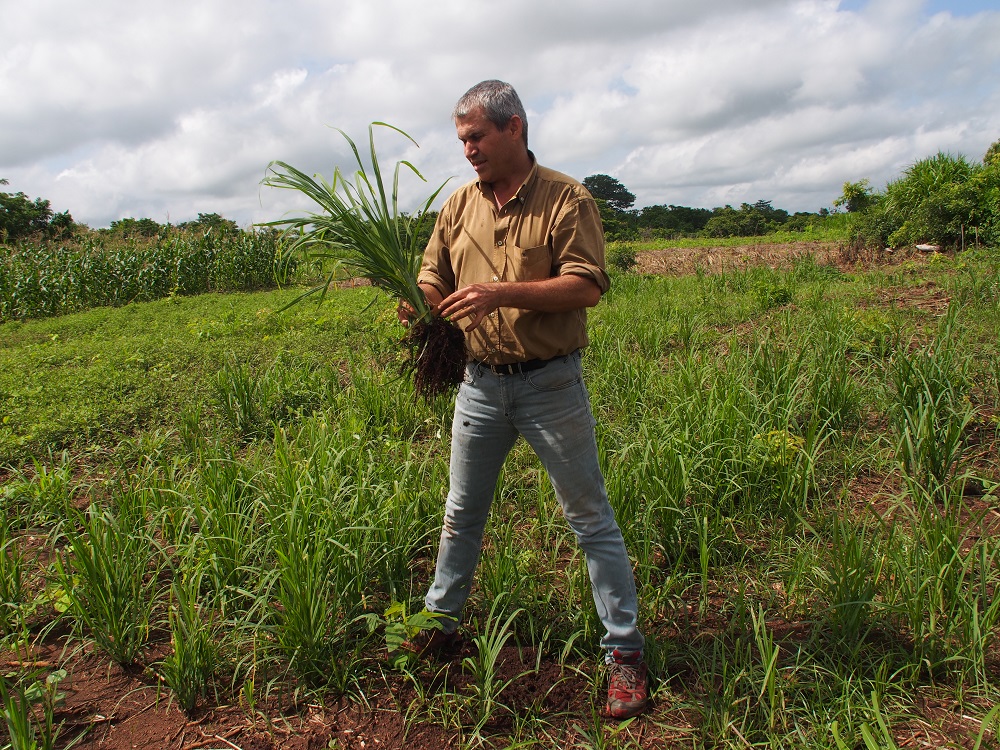 These systems could be sustainable and profitable in places where soils are vulnerable. The improved fallow systems could also be attractive to upland farmers in Madagascar, particularly when they have cattle to feed.

Research by AfricaRice, CIRAD, and the Centre National de la Recherche Appliquée au Développement Rural (FOFIFA), the national research institute of Madagascar, has confirmed that growing a legume cover crop following a zero-tillage approach is an efficient strategy to control the destructive parasitic weed Striga asiatica in upland rice. This strategy is being widely promoted through a farmer-learning video, available in local languages.

Healthy soil, healthy rice
AfricaRice and CIRAD are developing cropping systems based on conservation agriculture principles for the agronomic management of biotic stresses in rice such as pest, diseases, and weeds. “Our aim is to co-design with local farmers cropping systems that can provide plant protection with minimum inputs,” said Olivier Husson, CIRAD/AfricaRice systems agronomist.

As part of this research, Dr. Husson and his team are developing standardized methods for measuring three parameters, which can be used to efficiently characterize soil/plant conditions and indicate the robustness of cropping systems against biotic stresses.

“In this research, we are testing a new concept for managing pests and diseases,” observed Dr. Husson. “Instead of trying to control these stresses through adjustment of farming practices, we aim at increasing biodiversity through cropping systems to alter the environment and make it unfavorable for the biotic stresses.”

If this succeeds, it will open a new approach for integrated pest management.

Experiments on conservation agriculture for rice-based cropping systems have been set up at the AfricaRice research station in M’bé. Different crop/cover crop associations and rotations and soil management practices are being tested so that farmers can pick what fits them best or could be adapted to meet their constraints and means.

The impact of these systems on pest development will be studied improve their performances.

Building the capacity of national agricultural research and extension systems in Africa on conservation agriculture in integrated rice-based systems is a major component of this collaborative work. The experiments at M’bé serve as a training and demonstration platform site where researchers and farmers can interact and learn from each other.

Climate-smart approach
“M’bé is an ideal place to work because of its harsh climatic conditions for upland rice,” said Dr. Husson. “We are trying to develop rice-based production systems that are ready for the future so that they can respond better to the challenge of climate change and increasing water scarcity.”

According to the CGIAR Research Program on Climate Change, Agriculture and Food Security, conservation agriculture can increase resilience to climate change and has the potential to contribute to climate change mitigation by building the soil’s capacity to store carbon dioxide.

Challenges and opportunities
As conservation agriculture is knowledge-intensive, it requires a deeper understanding of ecological processes. It also calls for new skills and a change in mindset. For smallholders, this is a big challenge as any change in their farming practices implies risks.

The lack of a simple recipe for restoring soil health everywhere is another challenge for its large-scale adoption. However, it offers great opportunities for researchers to work with farmers to diagnose local soil and climatic conditions and redesign appropriate cropping practices.

“Despite very unreliable rainfall in the past three years in M’bé, we could produce a minimum of 800 to 1.2 tons per hectare every year without mineral fertilization application and tillage and with very limited weeding,” said Dr. Husson. “We are minimizing the risk taken by farmers and providing a benefit every year and achieved yields of up to 4 tons per hectare with fertilization. This shows that, if we learn to use the strength of nature, instead of fighting it, we can restore soil fertility rather quickly.”