More than 1,100 delegates from around the world gathered in Des Moines,  Iowa, last 13-15 October, to honor the 2010 World Food Prize (WFP) laureates David Beckmann and Jo Luck. There were also numerous side events, including the Norman E. Borlaug International Symposium, which focused on “Taking it to the farmer: reaching the world’s smallholders,” and recognition of the International Rice Research Institute for its five decades of achievement and its historic bond to numerous WFP laureates. 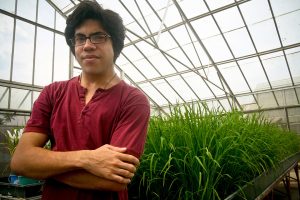 Aryo Feldman is involved in IRRI’s C4 rice project, which is looking to introduce characteristics of the C4 photosynthetic pathway of crops such as maize into rice, which could significantly raise the potential yield of tropical rice.

Aryo Feldman and Mariafe Calingacion, two Monsanto Beachell- Borlaug  International Program scholars, whom IRRI is currently hosting, attended the gatherings of their 12 fellow Beachell-Borlaug scholars to compare notes on their work. Mr. Feldman, a British- Indonesian, is involved in IRRI’s C4 rice project, which is looking to introduce characteristics of the C4 photosynthetic pathway of crops such as maize into rice, which, if achieved, could significantly raise the potential yield of tropical rice.

Ms. Calingacion, a Filipina, is breaking new frontiers in phenotyping to understand the compounds that confer the quality traits  of aroma, flavor, and taste in rice. 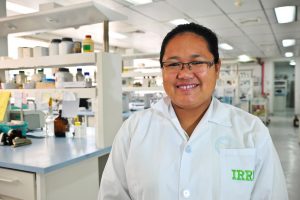 Mariafe Calingacion is breaking new frontiers in phenotyping to understand the compounds that confer the quality traits of aroma, flavor, and taste in rice.

In addition, an IRRI exhibit displayed posters on the work of Mr. Feldman and Ms. Calingacion, the Institute’s historic achievements, its most recent publications, and various historic videos about IRRI, including A kaleidoscope of achievements, recognition, and opinions, 1960-2010 and a 1994 dialogue between the father of the WFP, Norman Borlaug, and the second laureate, Robert Chandler, about the origins of IRRI.

During the Borlaug Dialogue, IRRI Director General Robert Zeigler joined in a conversation on Partnering with smallholders on strategies for food security (click here for the transcript or audio) with (from left in photo below ) Garbriela Cruz, a fourth-generation farmer and president of the Portuguese Association for Soil Conservation; Jose Fernandez U.S. Assistant Secretary of State for Economics, Energy, and Business Affairs; Dr. Zeigler; and Matt Kistler (far right), senior vice president for sustainability, Wal-Mart. Sean de Cleene, vice president of Yara International, was the moderator.

Dr. Zeigler pointed out, “A vast majority of the world’s rice production is supplied by very small farmers—200 million farmers in Asia alone.” He added, “However, what is extremely exciting from a research institute perspective, is that farmers are getting access to tools of communication unlike they never have before. This new accessible means of communication will completely revolutionize smallholder rice production on a global level.”

One of the keynote speakers, Jeff Raikes, CEO of the Bill & Melinda Gates Foundation (BMGF), talked about the package of six BMGF grants (totaling just over US$300 million) that span the agricultural value chain. “Two years in, these grants are having a direct impact on hundreds of thousands of farm families and are on track to reach their goals.” The example he gave was the BMGF grant for IRRI’s work on submergence-tolerant Sub1 rice. “By the end of this year, more than 400,000 will be planting this rice and by 2017 more than 20 million farmers will benefit from it,” he added, “and that is tangible progress!

Conversation on partnering with smallholders on strategies for food security.

Another keynote speaker, Rajiv Shah, USAID administrator, said, “We are working with the Consultative Group on International Agricultural Research (CGIAR), to support their new ‘mega programs’ [of which the Global Rice Science Partnership (GRiSP) will be first one to be funded starting in January 2011]. These programs focus on high‐potential research into new seed varieties, effective agricultural policy reforms, and better water and soil management practices. We have doubled our investment in these mega-programs, making us [USAID] the single largest supporter of the CGIAR.”

Also, former U.N. Secretary-General Kofi Annan told the delegates that discrimination against women is hampering development of agriculture in Africa, his native continent. “We cannot forget that the women who produce most of Africa’s food are particularly disadvantaged economically and socially,” said Annan, now chairman of the Alliance for a Green Revolution in Africa.”

During the WFP ceremonies at the Iowa State Capitol on 14 October, Ms. Lauren Schefter of Mount Vernon, Iowa, was presented with the Elaine Szymoniak Award for her work as an IRRI intern during the summer of 2009. She spent her internship working at IRRI’s Grain Quality, Nutrition, and Postharvest Center. Her experiments dealt mainly within the sensory characteristics; amylose content, gel temperature, gel consistency and texture.

David Beckmann and Jo Luck received the 2010 World Food Prize for their landmark achievements in building Bread for the World and Heifer International, respectively, into two of the world’s foremost grassroots organizations leading the charge to end hunger and poverty for millions of people around the globe. In honoring them, the World Food Prize recognizes the critical efforts of NGOs in mobilizing and empowering everyday citizens to end hunger in communities around the world.

Gene Hettel is the editor-in-chief of Rice Today.