IRRI will continue to be the center of excellence in rice science. We have to continue to play that vital role in the same sense. In the future, we have to excel beyond what we had done earlier. So, that is the biggest challenge—how do we project ourselves to be a world-class rice science center to support the world’s scientific community?

As head of IRRI’s Plant Breeding, Genetics, and Biotechnology Division (2007–11), Dr. Brar continued the traditional excellence of the division that made it the most respected plant breeding department in the world. (Photos by G. Hettel)

Darshan Singh Brar, a plant breeder at the International Rice Research Institute (IRRI; 1987–2011), devoted nearly a quarter century of dedicated service to the institute, which encompassed not only cutting-edge rice research but also administration, education, and support of national programs in developing countries.

He joined IRRI in 1987 as an associate plant breeder to work on genetic mapping and wide hybridization in rice. His career-long work on transferring useful genes and traits from wild species to domesticated rice has made a profound impact in rice improvement. The genetic materials produced over the course of his career have been extensively used for practical rice breeding as well as basic research at universities around the world. His research efforts resulted in the release of new rice varieties with resistance to diseases, insects, and tolerance of multiple abiotic stresses.

Through his excellence in scientific research, Dr. Brar trained numerous students and researchers with unique skill sets in plant breeding. Dedicated to rice improvement on a global scale, Dr. Brar also successfully built up human resources and research capacity for countless national programs. His scientific achievements and contributions around the world earned him numerous awards, such as the Outstanding Scientist Award of the CGIAR (2007), the Koshihikari International Rice Prize of Japan (2007), and the Republic of China’s Yunnan Friendship Award (2009). 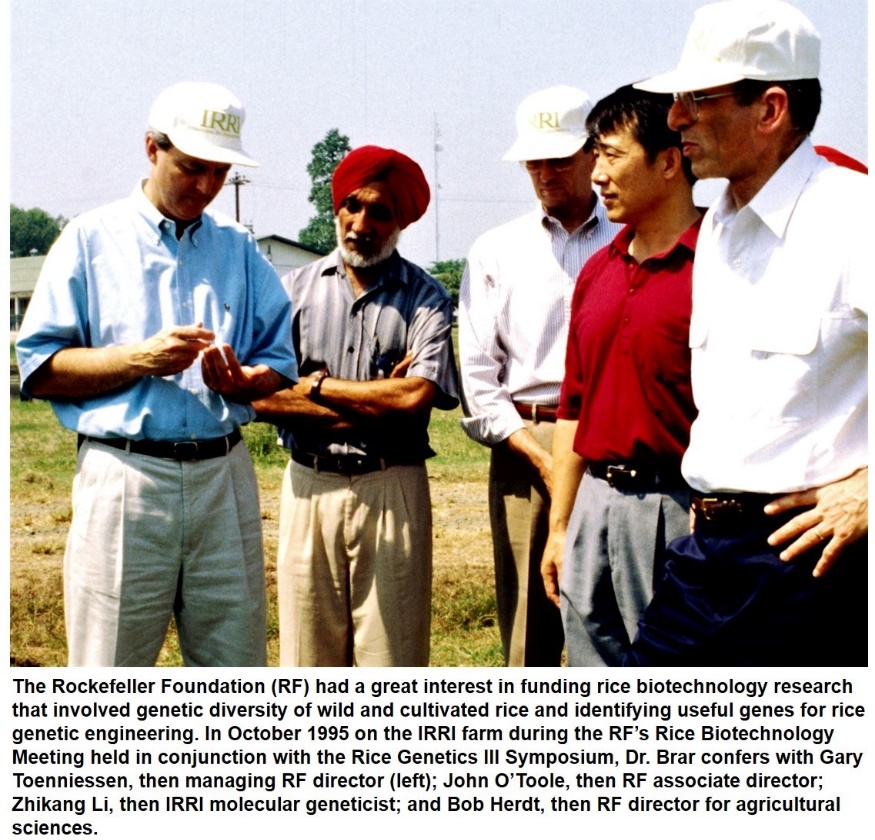 .
As head of IRRI’s Plant Breeding, Genetics, and Biotechnology Division (2007–11), he continued the traditional excellence of the division that made it the most respected plant breeding department in the world. He was a champion of employee welfare and his hands-on approach to solving day-to-day problems gained him the respect and admiration of his colleagues. Dr. Brar was instrumental in implementing biosafety policies and regulations at IRRI that enabled the Institute to work harmoniously with the Philippine government in the testing of transgenic rice. 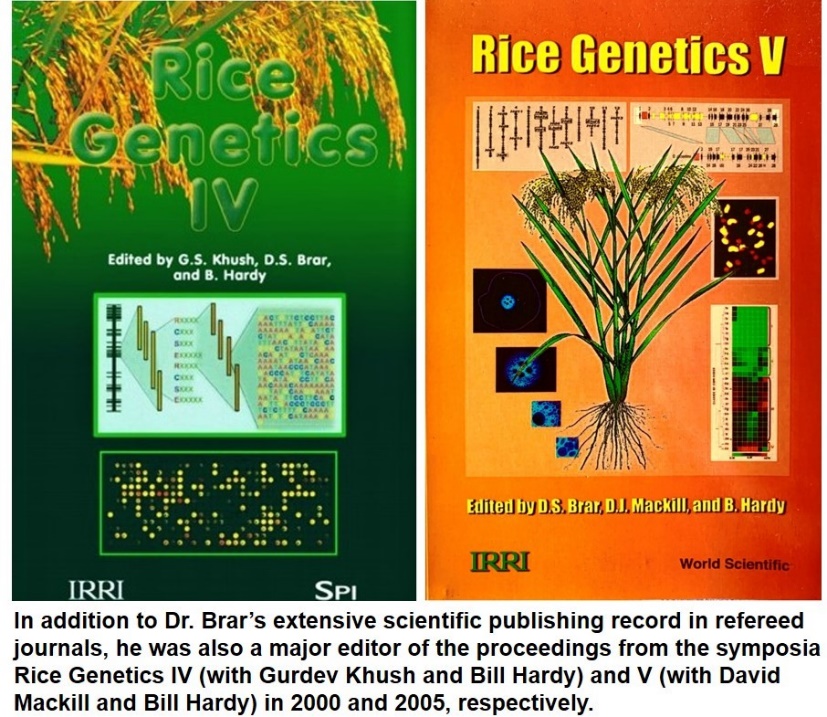 Through his excellence in research, dedication to educating the next generation of scientists, and encyclopedic knowledge of rice biology, Dr. Brar was a manifestation of IRRI’s global mission and an ambassador of agricultural science to the world.

Between 1989 and 2019, Dr. Brar was the author or co-author of more than 90 refereed journal articles dealing with such topics as interspecific hybrids, applications in biotechnology, alien introgression into rice, genetically engineered plants for quality improvement, broadening the gene pool of rice through introgression of wild species, and many other upstream topics.

Sadly, Dr. Brar passed away in India at the age of 76 on 11 March 2020. I conducted an IRRI Pioneer Interview with my friend as he neared retirement from IRRI in December 2011. Selected excerpts are included here. 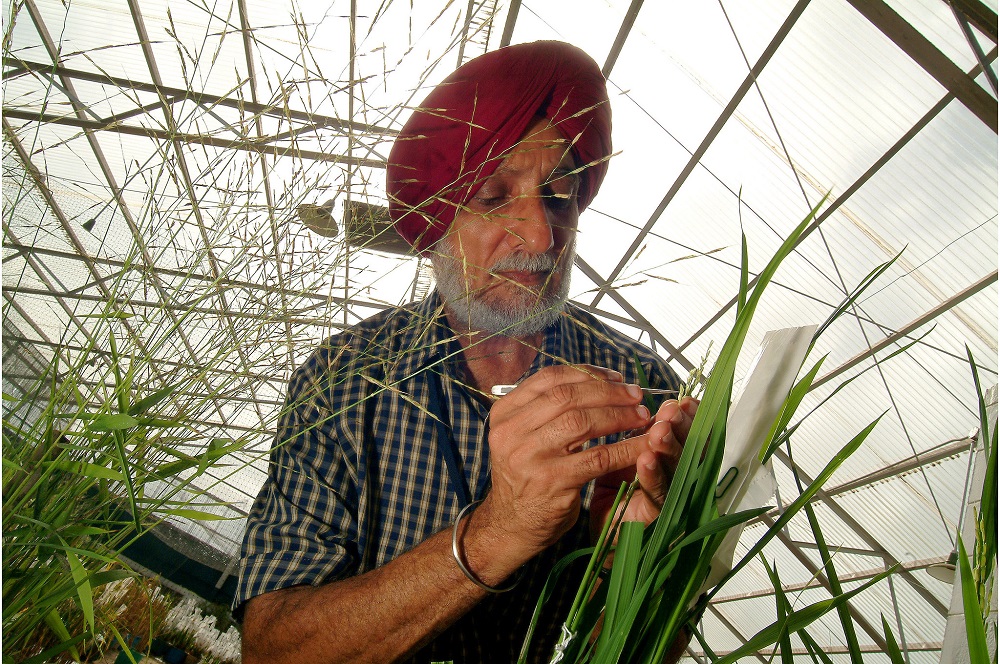 .
A treasure trove of traits
When I first arrived at IRRI, I did some work on genetic mapping even though at that time we did not have the molecular markers as we have now. Then after a couple of years, I took responsibility for IRRI’s wide hybridization team, which was attempting to tap the treasure trove of traits that reside in novel genes contained by so-called wild relatives of rice (such as Oryza longistaminata from Africa). We wanted to transfer disease and insect resistance traits to cultivated rice, which is attacked by so many diseases and insects.

There are many challenges when trying to bring these novel genes from wild species into the cultivated rice gene pool because of incompatibility barriers and sterility. To solve these problems, we used different techniques such as embryo rescue, molecular markers, marker-assisted selection, and direct introgression. And we were successful in transferring from wild species resistance genes for bacterial blight, blast, tungro, and brown planthopper.

Some of these genes have a broad-spectrum resistance, which is what plant breeders are looking for to combine with other resistance genes through pyramiding. We were able to transfer several genes and share them with our National Agricultural Research and Extension Systems (NARES) partners who started using these breeding products in their own programs.

The classic example was our work with the Xa21 gene (for bacterial blight resistance transferred from O. longistaminata). We pyramided Xa21 with other blight resistance genes, such as xa4, xa5, and xa13, and gave the pre-breeding products to our NARES partners to develop their own rice varieties.

I want to emphasize that this was a team effort. It was not just me doing this work, which was initiated by Dra. Gurdev Khush,  Lesley Sitch, and many postdocs and PhD students who were involved over the years. I am very proud that our team was able to broaden the gene pool of cultivated rice by transferring traits from wild species. 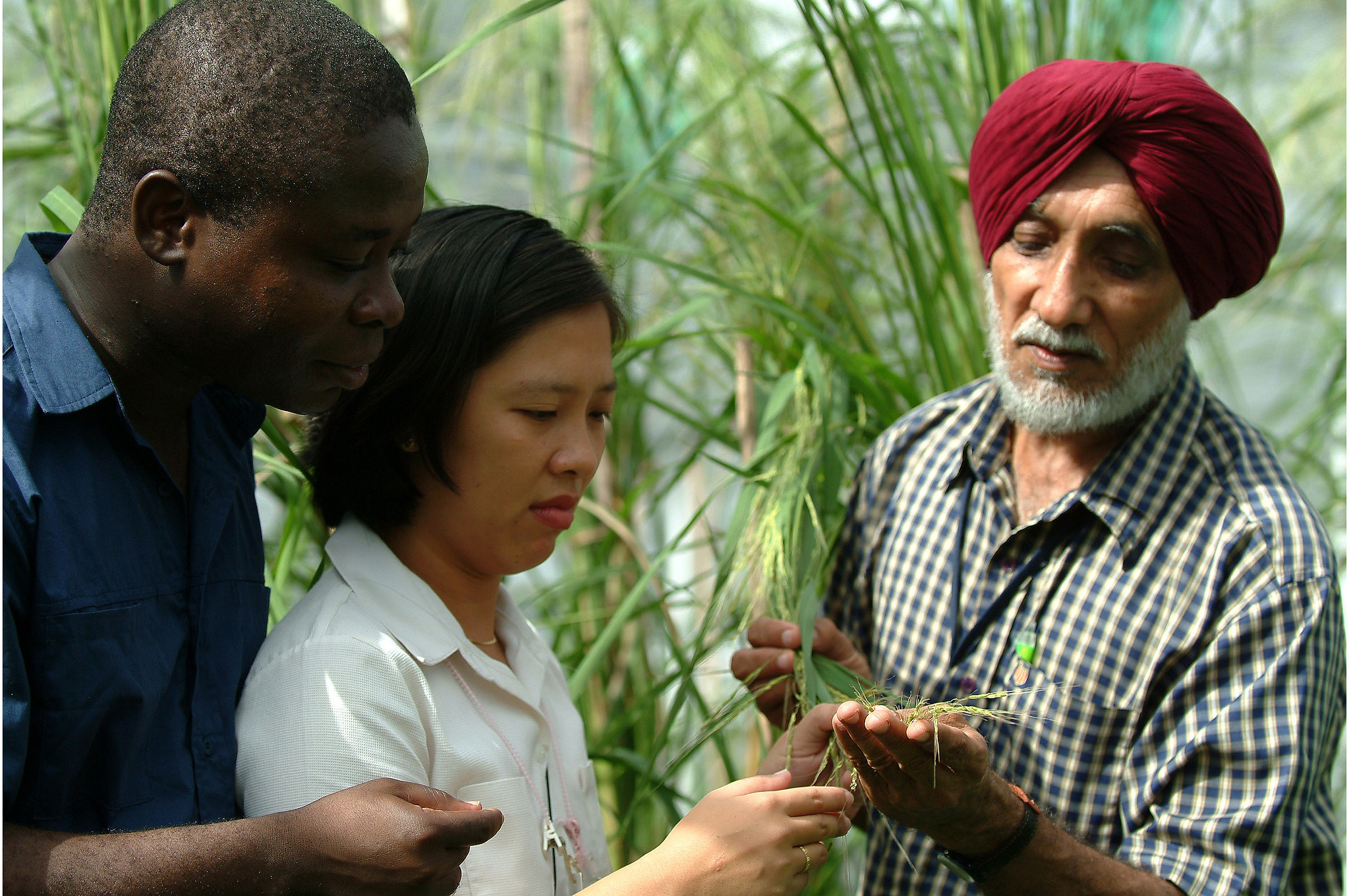 .
Wide hybridization and hybrid rice—what is the difference?
I would like to clear up some confusion among nonscientists that there is indeed a difference between the terms “wide hybridization” and “hybrid rice.” Wide hybridization occurs when any distantly related plant species or rice relative (such as O. longistaminata) is crossed with cultivated rice (O. sativa). In nature, such a cross is unlikely because different species are not compatible.

So, how is hybrid rice different? Here, the parents involved belong to the same species. They may be two strains, varieties, or races of O. sativa. We plant breeders take advantage of heterosis or hybrid vigor that results from such a cross to improve such traits such as size, growth rate, fertility, and especially yield in the case of hybrid rice, which are often better over those of the parents. So, the product of hybrid rice can be given to farmers for planting while the product of wide hybridization cannot be cultivated but, hopefully, the offspring have acquired the trait that we were trying to transfer from the wild species.

Greatest joys at IRRI
I would say one of my greatest joys while at IRRI is that our wide hybridization team was able to develop new products to enhance the rice gene pool that are now being used by our partners in the NARES. For example, by utilizing genes from wild species, four varieties in Vietnam and two in the Philippines have been recently released to farmers.

Another great joy has been my fortune to work with such a talented international community of scientists and support staff. I would like to mention two colleagues specifically. One is Dr. Khush because he brought me here and it was a special privilege to work with him directly as everybody knows he’s a world-famous plant breeder who has made major contributions to rice breeding and genetics. I learned so much from him. 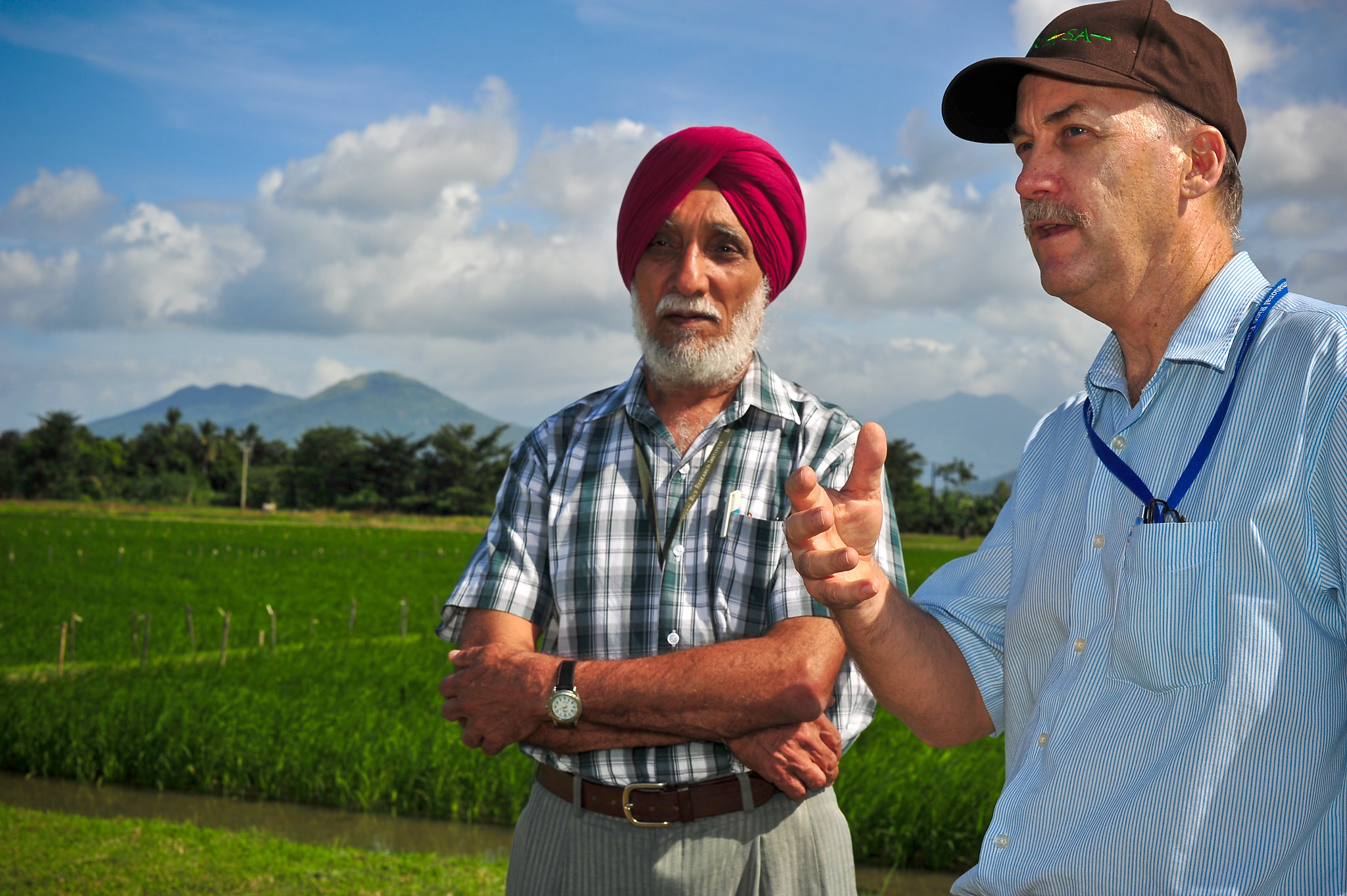 .
The other is my good friend and boss at the same time, David Mackill. He is another outstanding personality from whom I learned a lot, especially how to manage a research unit, which came in very handy when I myself became head of the Plant Breeding Division. Dr. Mackill, of course, led IRRI’s work in developing flood-tolerant and submergence-tolerant rice.

Another joy has been working with the Filipino community. I have very high regard for the Filipino national staff. They are highly talented and very hard working, pleasant, cordial, and polite. They are truly an important part of IRRI’s strength.

.
IRRI’s challenges for the future
IRRI has been a center of excellence in science, developing products and technologies, and sharing them. That is its strength. IRRI’s biggest challenge then is how to maintain this distinction. How do we efficiently deliver those products, keeping in mind that some of the NARES are also becoming very strong, although some are still weak in terms of personnel, training, and building capacity?

But I’m sure IRRI will continue to be the center of excellence in rice science. We have to continue to play that vital role in the same sense. In the future, we have to excel beyond what we had done earlier. So, that is the biggest challenge—how do we project ourselves to be a world-class rice science center to support the world’s scientific community?

The second immediate challenge for the plant breeding group is to ensure that we provide good capacity building and knowledge to our partners. This involves training, either degree or nondegree. We should still be the hub of the best possible training in rice science, breeding, and other related subjects.

The third challenge is that IRRI continues to be a repository for rice germplasm because it has an excellent gene bank. We have better techniques to characterize diversity and other things so that the scientific community can efficiently use the gene bank for gene discovery. IRRI must ensure that it continues to play that role.

So, I would say IRRI must be at the forefront of pre-breeding products, capacity building, and sharing better germplasm and technologies. Also, IRRI must make sure that the new tools become available. Take a very simple example. IRRI should take the lead in pyramiding genes for biotic and abiotic stresses. It should then give the pre-breeding products to the NARES. That would be the biggest contribution to help meet the challenges that other groups are facing. In addition, IRRI must ensure that it captures all the new knowledge of genomics, plant breeding, agronomy, whatever the subject and then we give that package to the farming community or the NARES.

We are very fortunate that our NARES partners are accepting the new technologies. For example, our host country, the Philippines, is using many of the technologies in its Rice Self-Sufficiency Program. The University of the Philippines Los Baños is providing us with students for degree training. This activity is helping both the scientific world as well as building capacity. So, we have to maintain these aspects for the future because we now have better knowledge and tools.

Special note
In May 2009, Dr. Brar, while walking through IRRI’s rice plots, pointed out and described the Institute’s historic varieties up to that time, starting with IR5, 8, and 20.