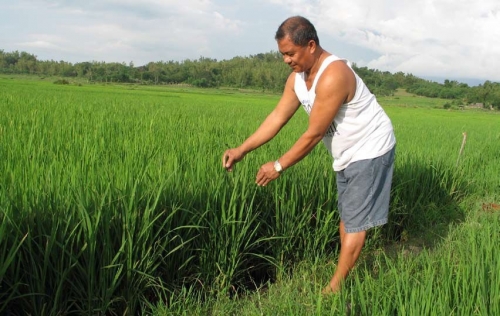 The global food crisis of 2008 hit Asia particularly hard. The price of rice, Asia’s predominant staple food, rose faster and farther than almost any other food, placing enormous pressure on millions of poor consumers who spend a substantial portion of their income on the grain.

And, despite higher prices, farmers, too, face formidable challenges to make rice production profitable. With fertilizer prices skyrocketing, farmers more than ever need to be creative, resourceful, and adaptive in their nutrient management.

This is the story of Johnny Tejeda, a 46-year-old Filipino rice farmer who took the risk of deviating from the traditional way of applying fertilizer. Mr. Tejeda adopted a relatively new practice known as site-specific nutrient management (SSNM), which allows farmers to “feed” rice with nutrients as and when needed (see figure on page 34). Non- SSNM fertilizer recommendations available to Mr. Tejeda prescribed higher rates of some nutrient sources and did not provide such detailed guidelines on the optimal distribution and timing of nutrients during the growing season.

According to Roland Buresh, soil scientist at the International Rice Research Institute (IRRI) and one of the lead developers of SSNM, the approach helps rice farmers “to increase their profit by optimally supplying their crop with essential nutrients.” Moreover, by applying need-based nitrogen (N), phosphorus (P), and potassium (K) fertilizer, farmers can not only boost their income, they can also reduce the incidence of pests and diseases.

Mr. Tejeda owns 1.3 hectares of land in Iloilo Province, Philippines. One of the top five rice-producing provinces in the country, Iloilo (pronounced “Ilo-ilo”) is the rice granary of the central Philippines.

Mr. Tejeda’s municipality of Tigbauan, a 30-minute drive from Iloilo City, is composed of 52 villages with a total population of 57,000. Ninety percent of the municipality’s approximately 9,000 hectares are devoted to agriculture, with about 4,550 hectares planted to rice and an average farm size of 0.5 hectare.

“Life is tough nowadays,” says Mr. Tejeda. “The gasoline cost is so high that it shoots up the cost of preparing the land for rice cultivation. Fertilizer inputs are so expensive.”

Thus, because N is responsible for a rice plant’s greenness, farmers often give extra attention to urea applications.

Direct sowing of rice seed, rather than transplanting of seedlings, is common in Iloilo. Planting time for the wet season is usually in May–July, depending on adequate rainfall, and harvest is in August–October. The dry season is from October–November to February–March.

In May 2007, IRRI scientists led by Dr. Buresh in collaboration with Greta Gabinete, a soil  scientist at West Visayas State University in Iloilo, established a small SSNM demonstration in Mr. Tejeda’s and a neighboring rice field. The neighboring farmer, who was also an agricultural technician, told Mr. Tejeda that SSNM validation experiments had worked in other villages.

While the experiment  was being conducted, recounts Mr. Tejeda, he quietly imitated the SSNM practice on the remaining 1.2 hectares of his field. It was a risk, but, he decided, one worth  taking given the rising prices of fertilizers and the increasing cost of living.

“SSNM has really helped me a lot,” says Mr. Tejeda. “When I practiced SSNM in the 2007 wet and dry seasons, my yield increased markedly. Since then, I have continued practicing SSNM.”

With SSNM, Mr. Tejeda applied fertilizer three times, instead of his usual two applications. His first application was at 12 DAS using three bags of 14-14-14 NPK. His second and third applications were at 28 and 38 DAS using 1.5 bags of urea per hectare for each application.

Before  and during SSNM, he used a total of six bags of fertilizer per hectare, but the nutrient composition and timing of the applications differed (see table, below). 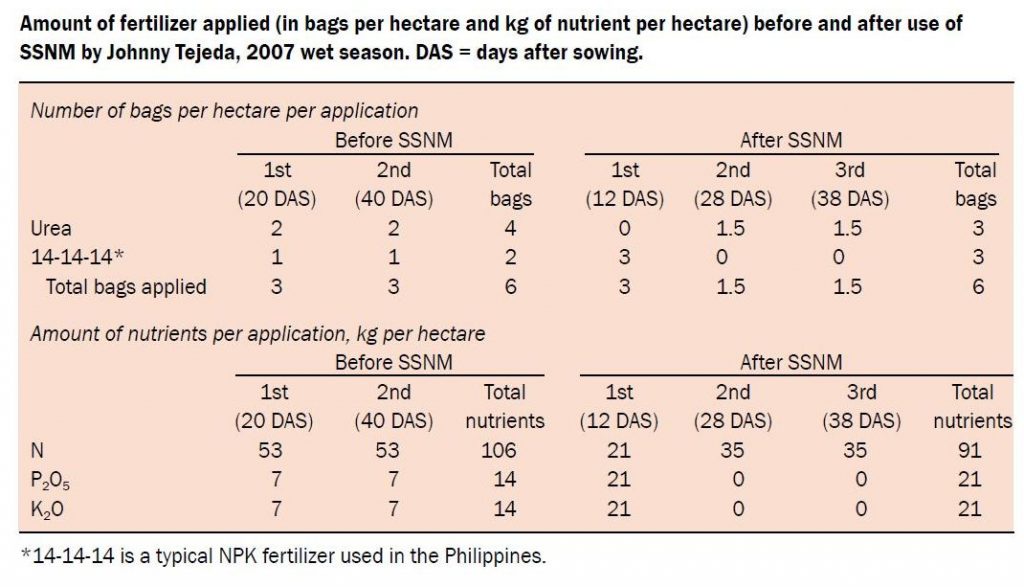 It is instructive to hear what Mr. Tejeda has to say about SSNM in his own words.

When I first practiced  SSNM in the 2007 wet season, I couldn’t sleep well for around 10 days after my first fertilizer application. My rice plants weren’t green and they were not growing well compared with those in other farmers’ fields, though the growth and color of the leaves were similar to those in the neighboring SSNM demo plot and the experimental plot in my field. Before I slept, I kept wondering why it seemed that there was no fertilizer response by my rice crop. I was really anxious that my crop might fail.

For those 10 days, I was uneasy and kept moving around the rice fields in the village, comparing the growth of the rice plants.But, 10 days after the second fertilizer application, I was amazed. By then, the growth stand of my rice crop was far better than that in farmers’ fields not  practicing SSNM. My stems were so hard and the roots were so deeply rooted. Also, my plants were not infested with pests and diseases and did not lodge [fall over]. Many of those plants  that had accelerated growth and bright green leaves after the first fertilizer application lodged long before harvest and were infested with pests and diseases. I realized that SSNM enabled the rice crop to take a balanced “diet” before urea was supplied.

Mr. Tejeda harvested again in the second week of August 2008, achieving a good yield of just over 6 tons per hectare. He also reported that many of his neighboring farmers have begun to follow SSNM.

When my neighboring farmers saw the good performance of my crop after my second fertilizer application, they began to ask me what SSNM is about. At the same time, they monitored my field. We farmers normally discuss many things on the farm, especially when it comes to our rice crop.

My constant interaction with the researchers doing experiments in my rice field, and with the agricultural technician, enriched me with knowledge about SSNM that I happily shared with my cofarmers during our “huntahan,” or spontaneous farm discussion.

After the 2007 wet-season harvest, it was known in my village that my yield was high,increasing from 120 to 184 bags of unmilled grain. This made my neighbors eager to imitate me in using SSNM.

Dr. Palis is an anthropologist in IRRI’s Social Sciences Division.

Dr. Gabinete is a professor at West Visayas State University.