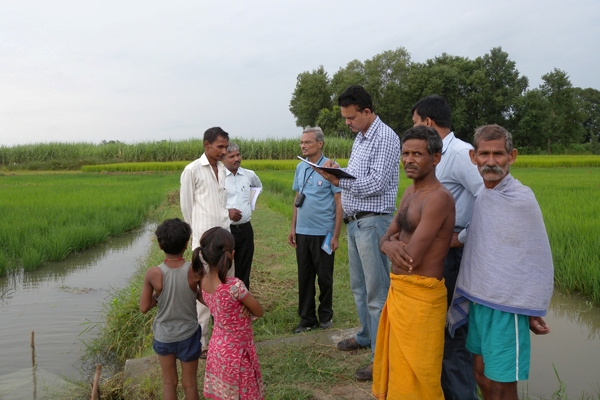 SUDHANSHU SINGH (in checkered shirt) talks with the farmers in a village in Odisha to monitor the performance of flood-tolerant Swarna-Sub1 (background) after it went through a flood.

Sri Premananda Swain, a farmer from Arapada Village, Balipatna Block, Khurda District in Odisha, did not mind that it had rained for a short while earlier that day. Long ago, rain bothered him a lot. He knew that if rain continued to pour a little harder and for a longer time, it meant disaster. Floods could bring all his efforts to nothing when his rice crop was under water. The village has around 40 households and most of them, like Mr. Swain’s, have small and marginal farmers who depend mainly on farming rice as their main crop. But, flooding is so common in his village because it is located near the river Dhanua.

In India, about 5.36 million hectares are flood-prone. In South Asia, it is about 12 million hectares. In fact, almost half of South Asia is rainfed and is prone to climate change-related problems such as flooding, salinity, and drought.

“Rainfed,” Sudhanshu Singh, scientist at the international Rice Research Institute (IRRI), stressed the word. The gloom in his voice became obvious as he recited a litany of words usually associated with rainfed.

“Low and fragile productivity; marginal and small landholdings; poor farmers; little use of inputs; more dependence on traditional varieties; less availability of quality inputs, including seed; a poor extension network; and slow adoption and diffusion of new technologies,” he said.

These are the reasons why most of these areas were left uncultivated and unproductive. But Dr. Singh believes that well-planned actions and increased efforts are crucial in overcoming the constraints in these environments.

Climate-smart rice varieties developed at IRRI and multiplied and distributed under the Stress-Tolerant Rice for Africa and South Asia (STRASA) project, are already creating a major impact and have improved the lives of 10 million farmers in South Asia and Africa.

The usual yield of climate-smart rice such as Swarna-Sub1, a flood-tolerant variety, is generally around 5 tons per hectare according to Dr. Singh.

“This is already a one-half ton to one-ton yield advantage over traditional varieties under normal conditions, meaning no flood,” he said. “But improved crop management practices can add as much as half a ton to one ton of yield.”

Thus, in 2011, Dr. Singh started a project, funded by the European Commission (EC) through the International Fund for Agricultural Development (IFAD) that focuses on promoting appropriate management technologies to complement climate-smart rice varieties.

“These technologies will further improve the productivity of flood-prone and salt-affected rainfed lowland areas in South Asia, make rice production stable, and increase the income of resource-poor farmers,” he said.

SUNHANGSHU SINGH (left) and his team are helping farmers in a flood-prone area. The background shows fields planted to Swarna, a flood susceptible variety, after 10 days of complete submergence

With this goal in mind, Dr. Singh’s team from IRRI and partners from Association for India’s Development, headed by Dr. J. K. Roy, nodal scientist of the project, visited Arapada Village during the kharif (wet) season of 2012 to introduce improved nursery management practices for Swarna-Sub1.

Although the farmers use nitrogen and phosphorus fertilizers in seed beds, they also had a few misconceptions about fertilizing. They didn’t use potassium because they believed that potash can make the roots of the seedlings grow so much that it would be difficult for contracted laborers to uproot them during transplanting. The farmers were afraid that this would increase the labor cost.

The demonstration plots showing the proper use of fertilizer, however, convinced the farmers to adopt the program and start applying fertilizer at the recommended rate of 45- 45-45 kg NPK per hectare in their seedbeds.

In his local Odiya language, Mr. Swain raved about the importance of having healthy seedlings. He testified how changing his crop management style a little bit had given him more yield from his Swarna-Sub1.

“Seven and a half tons,” he said happily. “I was able to harvest 7.5 tons per hectare from my Swarna-Sub1.

“Learning about better seedbed management and proper use of NPK dosage has helped me grow healthy and robust seedlings,” said Mr. Swain as he explained why he harvested a bumper crop that year. “My crop grew properly; the grains were heavy.”

Speaking for his fellow farmers in the community, he said that, they would continue to grow Swarna-Sub1 and would continue to practice what they’ve learned from the project team on how to raise healthy seedlings of flood-tolerant varieties.

“This is just one of the interventions among many,” said Corinta Guerta, the director for external relations at IRRI. “The plan is to develop suitable crop management options for climate-smart rice and exploit their maximum potential under stress conditions. And, we are doing it with the farmers at the center of the seed production and delivery system.

“We are able to accomplish these because of IRRI’s strong relationship with donors such as the EC through IFAD that started in 1978,” she added. “It is a relationship that has a common denominator of helping Asia’s poorest farmers.”

“As we worked with the farmers through this project, we came to understand more what their needs are in stress-prone environments and the technologies that were developed are tailor-made for their specific needs,” said Dr. Singh.

“Through this project alone, a total of 14.6 tons of seeds of climate-smart rice varieties were distributed directly to 3,340 farmers,” said Dr. Singh. But, it did not end there. The beauty of the project is that it is more than just giving seeds to farmers—included with the seed mini-kits are illustrated brochures to introduce technologies on how to cultivate climate-smart rice.

And, under the IRRI-led Global Rice Science Partnership (GRiSP), several farmer training activities were organized through collaborations with projects such as STRASA, ECIFAD, IRRI, and India’s National Food Security Mission (IRRI-NFSM), among others, in which many senior technical experts from national agricultural research and extension systems (NARES), NGOs, and IRRI delivered lectures on various management aspects of climate-smart rice.

“More importantly, the knowledge gained from this project is also shared with other project teams with similar goals of helping the smallholder farmers in rainfed South Asia,” Dr. Singh said. “As a result, our NARES partners and local communities have more access to relevant information and suitable technologies.”

Ms. Lanie Reyes is the managing editor of Rice Today.