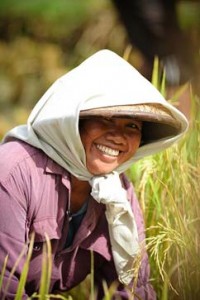 Southeast Asian rice farmers are harvesting an extra US$1.46 billion worth of rice a year as a result of rice breeding – the science that brings new rice varieties to farmers – by the International Rice Research Institute (IRRI), according to a new Australian report.

The Australian Centre for International Agricultural Research (ACIAR) assessed the impact of IRRI’s research on improving rice varietal yield between 1985 and 2009 and found a boost in rice yield by up to 13%.

“This means farmers are now harvesting more rice per hectare, which not only lifts them out of poverty, but it is contributing towards the world-wide challenge of feeding the estimated global population of 9 billion people in 2050,” said Australian Minister for Foreign Affairs Kevin Rudd.

“Ensuring an ample and affordable supply of Asia’s staple crop is critical to reducing poverty and increasing regional stability,” he added.

The assessment also showed that IRRI’s improved rice varieties increased farmers’ returns by US$127 a hectare in southern Vietnam, $76 a hectare in Indonesia, and $52 a hectare in thePhilippines.

Dr. Robert Zeigler, director general of IRRI, placed the magnitude of this impact in context.

“The annual impact of IRRI’s research in these three countries alone exceeded IRRI’s total budget since it was founded in 1960,” Dr. Zeigler said.

IRRI is a global leader in rice science that has helped to avert famine, lift people out of poverty, and save millions of hectares of natural ecosystems from being turned into farmland.

“For national governments, philanthropists, and even just your average person on the street who wants to make a difference in people’s lives, then it’s worth considering donating to rice research,” said Dr. Zeigler.

“Other benefits include improvements in eating quality and resistance to pests and diseases,” said Dr. Templeton.

In 2010, the Australian Government contributed AUS$15.4 million towards the construction of a new, state-of-the-art Plant Growth Centre and upgrades to IRRI’s experimental farm in the Philippines.

These new facilities are enhancing IRRI’s capacity to increase rice yields against a backdrop of agricultural production pressures and a growing global population.

“IRRI’s high levels of return on investment, as found by the ACIAR study, shows how Australians can really make a difference by effectively targeting our aid dollars,” Mr. Rudd added.