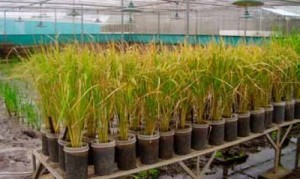 Iron deficiency and iron deficiency anemia cause a range of health problems in humans, including increased chances of maternal and child mortality and negative consequences on cognitive and physical development of children. They also affect an individual’s physical performance, especially the work productivity of adults.

Combating micronutrient malnutrition is considered to be among the best investments that generate a high return in socioeconomic benefits according to the 2008 Copenhagen Consensus. The Consensus listed biofortification, a method of breeding crops in order to increase their nutritional value, as one of its top five investments to address global challenges.

In developing countries, rice, as a staple food, may still provide as much as 80% of the daily calorie intake. Unfortunately, polished white rice contains low amounts of iron. A study of the iron content of polished rice marketed in a number of rice mills in the Philippines and Vietnam showed that popular varieties such as IR64, Sinandomeng, Intan, and Jasmine 85 generally contain 2–3 milligrams of iron per kilogram (ppm) of rice, and a maximum of 4–5 ppm in a few rice mills in Vietnam. Similar studies in the U.S. and Brazil have verified the very low iron in white rice.

Breeders at the International Rice Research Institute screened thousands of rice seeds from the International Rice Genebank (a seed bank) and from breeding lines and varieties for the iron content in the polished rice. They identified a few potential breeding materials with 5–8 ppm iron. Biofortified crops need to contribute at least 30% of the estimated average requirements for them to be me aningful to a target population group. The HarvestPlus Program of the Consultative Group on International Agricultural Research has set a minimum of 14 ppm iron in polished rice to benefit women and children.

Now, the next question is, how to fill the gap.

In addition to more breeding, one option is to use modern biotechnology to introduce other genes to increase the uptake and storage of iron in the rice endosperm (white rice when polished). In earlier work, it has been established that the iron in rice is highly bioavailable (can be absorbed and used by the human body) and additional iron should also be bioavailable. One preferred biotechnology approach uses the gene from soybean for the protein ferritin. Ferritin is an  iron-storage protein that can hold up to 4,500 atoms of iron per molecule in its central cavity. A study with humans with ferritin purified from soybean has shown that the iron from this source is one of the most bioavailable forms known.

Several studies have reported that the ferritin biotechnology approach can increase the iron content to 8–10 ppm, but not yet to 14 ppm. Recently, some studies have shown that modifying the iron transporter nicotianamine in rice can be effective in increasing iron concentrations in the grain. This approach uses a number of rice genes for nicotianamine synthase to boost the overall levels of the transporter and thereby increase the movement of iron into the grain. The incorporation of the two approaches, soybean ferritin and rice nicotianamine synthase, together in popular varieties, is now being advanced to determine whether the combination will lead to achieving the very important goal of rice with higher iron.

Biofortification can serve as an important sustainable tool in combination with existing ways of overcoming iron deficiency and iron deficiency anemia; these existing approaches include a diverse diet, fortification, and supplements. The main advantages of developing varieties with  high iron content are that this is a food-based approach and delivering the solution in such a widely consumed crop could contribute to a large effect.