Sustainable soil management is an integral part of sustainable land management as well as a basis for addressing poverty eradication, agricultural and rural development, promoting food security, and improving nutrition. It is a valuable tool for climate change adaptation and a pathway for safeguarding key ecosystem services and biodiversity.

Soils are an essential and nonrenewable natural resource hosting goods and services vital to ecosystems and human life. Soils are fundamental for producing crops, feed, fiber, and fuel as well as for filtering and cleaning tens of thousands of cubic kilometers of water each year. As a major storehouse for carbon, soils also help regulate emissions of carbon dioxide and other greenhouse gases, which is fundamental for regulating climate.

However, evidence recently provided in the 2015 Status of the World’s Soil Resources (SWSR) report on global soil resources within a framework of ecosystem services and other studies showed that about 33% of global soils are moderately or highly degraded due to, for example, unsustainable management practices.

Multiple soil threats across the world
Soil erosion was ranked as the most important threat to the soil in all regions. Annual crop losses due to erosion were estimated at 0.3% of crop yields. Annual cereal production losses due to erosion have been estimated at 7.6 million tons. On a global scale, an annual loss of 75 billion tons of soil from arable land is estimated to cost about USD 400 billion each year in lost agricultural production. This loss also significantly reduces the soil’s ability to store and cycle carbon, nutrients, and water. Erosion on crop and intensively grazed lands is 100 to 1,000 times the natural rate. If it continues at this rate, a total reduction of over 10% could take place by 2050. The annual cost of fertilizer to replace nutrients lost to erosion is USD 110- 200 billion.

Soil carbon and biodiversity losses are the next threats and its primary driver is changing land use. When land is converted from native forest to crops and pasture to crops, soil carbon decreases by 42% and 59%, respectively. The loss in the global pool of soil organic carbon since 1850 is estimated at 66 billion tons and much of which remains in the atmosphere. Enhancement and maintenance of soil organic carbon are critical for soil biodiversity to increase the resilience of the soil for food production, especially its ability to withstand disruption due to human-induced climate change. The soil organic carbon buffers the impact of climate extremes on soils and crops by (i) regulating water supply to plants, (ii) reducing erosion through runoff decrease, and (iii) providing sites for nutrient retention and release.

Nutrient imbalance, infertile soils, and the undersupply of nutrients to crops in some regions are major contributors to the yield gap. Many studies emphasize the inability of mineral fertilizers alone to significantly increase food production in regions where the yield gap is the greatest unless significant inputs of organic material through crop residues or manures also occur. Removing the nutrient limitations only through additions of mineral fertilizers will also exacerbate the range of environmental issues such as nitrous oxide gas emission from nitrogen fertilizer and surface and groundwater contamination unless the efficiency of agricultural inputs can be increased.

Soil acidification, contamination, and salinization are the other threats that lead to changes in the chemistry of the soil and significant decreases in crop yields. Around 30% of the topsoil and 75% of the subsoil is affected by acidity. The main causes of human-induced acidification are acid deposition (commonly called acid rain) and massive application of ammonium-based fertilizers. Soil contamination damages food security because toxic levels of contaminants reduce crop yields and crops that are produced can be unsafe for consumption. An estimated 760,000 km2 of land worldwide are affected by human-induced salinity caused by inappropriate practices including irrigation. Increasing soil salinity takes an estimated 30,000 to 150,000 km2 of irrigated cropland out of production every year and decreases the production potential of another 200,000 to 460,000 km2.

Soil compaction and waterlogging are also the threats which create rooting problems for plants, thereby reducing yields. Overgrazing and the spread of mechanized agriculture are cited as major contributing factors.

Saline soil in northeast Thailand. Soil salinity is difficult to manage although there are some technical options available (Photo by Y. Niino, FAO)

Reducing threats, increasing productivity
A number of soil threats can be simultaneously addressed by adopting specific management practices. The practices of greatest relevance to soils are:

These management practices are highly interlinked and all, in the long term, will minimize specific soil threats such as soil erosion by wind, water, and tillage; soil organic carbon loss (and hence reduce soil carbon dioxide gas emissions); and soil compaction and physical deterioration. It would also reduce the loss of biodiversity from the soil. The reduction of these threats will, in turn, improve the supporting services offered by the soil and the regulating, provisioning, and cultural services that rely on these supporting services.

A global soil partnership
In 2012, the Food and Agriculture Office (FAO) Council established the Global Soil Partnership (GSP) in because of growing concerns about the state of global soils and to ensure greater recognition of the essential contributions of soils to agriculture and food production, as well as their crucial ecosystem services. The GSP is a coalition of partners that promotes and implements sustainable soil management at all scales, from local to global.

Through enhanced and applied knowledge of soil resources as well as improved global governance and standardization, GSP aims to 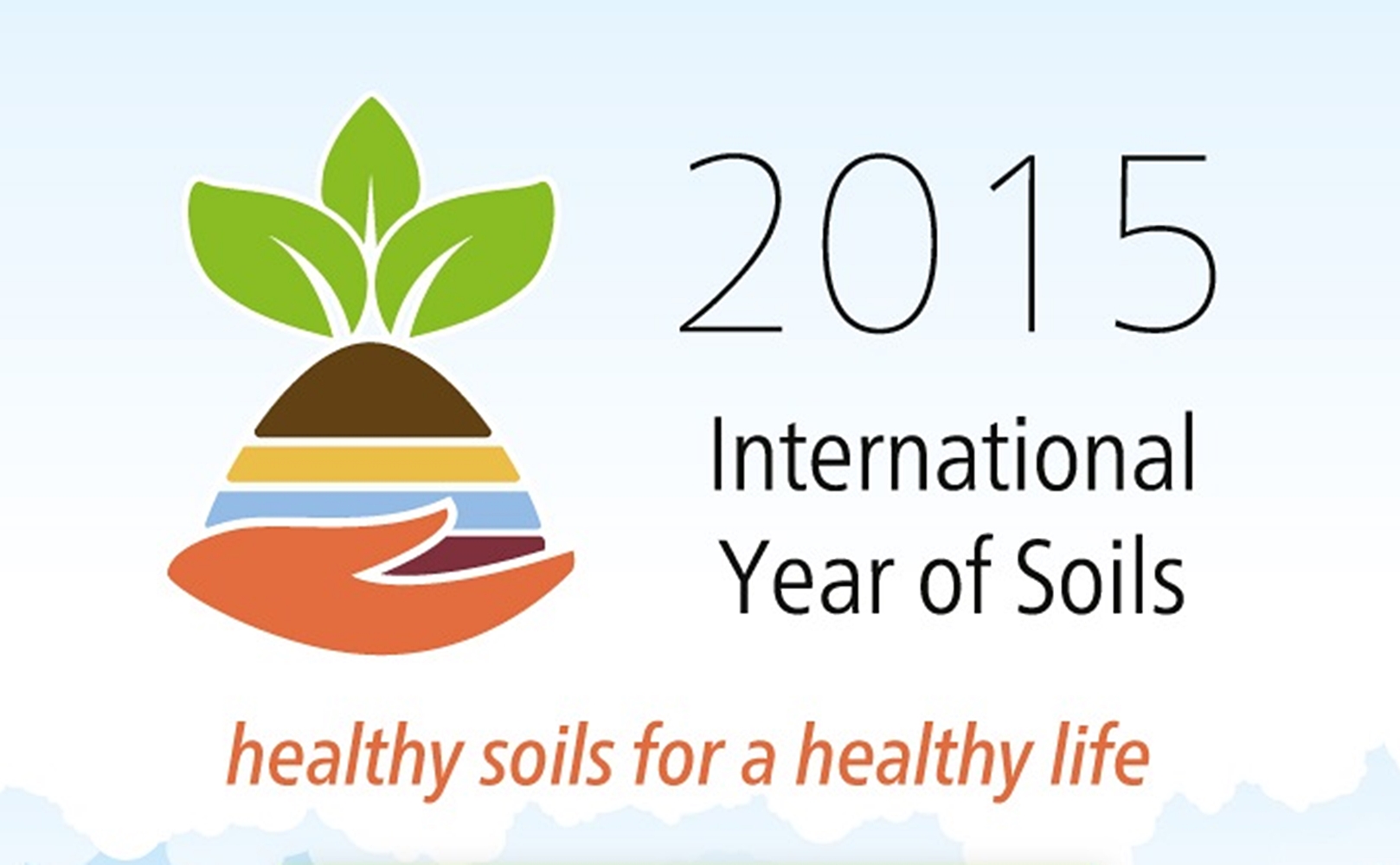 International Year of Soils
In 2013, to ensure that the global community will observe the importance of maintaining healthy soils for feeding the growing population and meeting the need for biomass (energy), fiber, and fodder, the United Nations General Assembly proclaimed 2015 the International Year of Soils and marked 5th of December as World Soil Day. In 2015 the World Soil Charter, which contains key principles and guidance for action towards sustainable soil management, was revised in view of the major policy and scientific developments over the past three decades. Consecutively, the Voluntary Guidelines for Sustainable Soil Management was endorsed by the FAO Council in 2016 to complement the World Soil Charter by further elaborating principles and practices for incorporation into policies and decision-making.

Sustainable soil management is an integral part of sustainable land management as well as a basis for addressing poverty eradication, agricultural and rural development, promoting food security, and improving nutrition. It is a valuable tool for climate change adaptation and a pathway for safeguarding key ecosystem services and biodiversity. Widespread adoption of SSM practices is expected to generate multiple socioeconomic benefits for smallholder farmers and large-scale agricultural producers worldwide whose livelihoods directly depend on their soil resources.

Mapping the world’s soil carbon
Soil organic carbon is the main component of soil organic matter and is a crucial contributor to food production, mitigation, and adaption to climate change and the achievement of the UN Sustainable Development Goals (SDGs) on zero hunger, climate action, and life on land. However, knowledge about soil organic carbon baselines and changes under climate change and changed land management are still very limited.

An international network to conserve black soils
Black soils are characterized by a thick, dark-colored soil horizon rich in organic matter and high inherent fertility but are very sensitive to anthropogenic intervention and prone to severe degradation. These can be large potential sources of greenhouse gases if we fail to conserve and use sustainably. To address sustainable management of black soils, the International Network of Black Soils (INBS) was established in 2017 to provide a platform for knowledge sharing and discussing common issues related to the conservation and sustainable management of black soils. Following the launch of INBS, the first international symposium on black sols was organized in Harbin, China in September 2018 and signed the Harbin Declaration on the International Network of Black Soils for advancing science and technology of black soils management in the world. 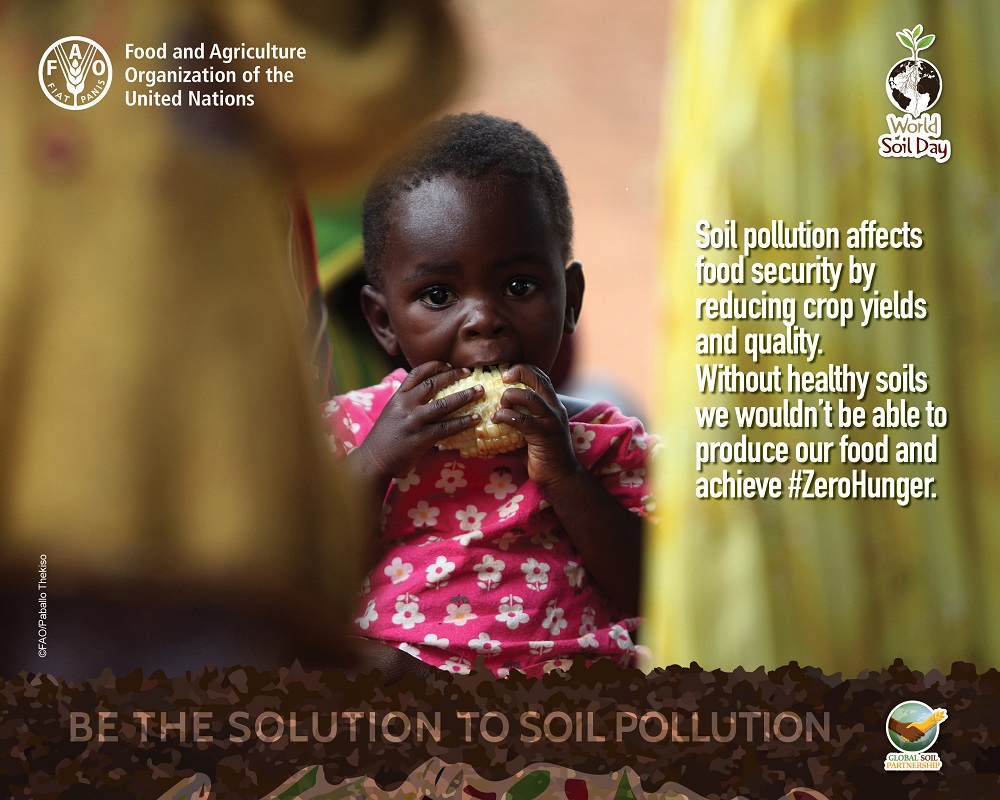 Minimizing and combating soil pollution
As mentioned earlier, the SWSR identified soil contamination and pollution as one of the main soil threats affecting global soils and the ecosystems services provided by soils. Despite the efforts to estimate the extent of soil pollution, the lack of a global assessment hinders the mobilization of actions and commitments to minimize and combat soil pollution.

Stronger scientific evidence to support actions to prevent, control and remediate soil pollution is needed and thus the Global Symposium on Soil Pollution (GSOP18) was jointly organized by FAO, GSP-ITPS, UN Environment, the World Health Organization, and the Basel, Rotterdam, and Stockholm conventions in May 2018. It identified the main knowledge gaps and concluded that soil pollution is caused mainly by human actions and demonstrated their implication for environment and health.

Breathing life back into the soil
“Soil health” is defined as the capacity of the soil to function as a living system, with ecosystem and land use boundaries, to sustain plant and animal productivity, maintain or enhance water and air quality, and promote plant and animal health. Healthy soils maintain a diverse community of soil organisms that help to control plant disease, insect and weed pests, form beneficial symbiotic associations with plant roots; recycle essential plant nutrients; improve soil structure with positive repercussions for soil water and nutrient holding capacity, and ultimately improve crop production (FAO, 2008). A healthy soil does not pollute its environment and contributes to mitigating climate change by maintaining or increasing its carbon content.

Declining soil health is likely to impact not only food production but also water availability and retention capacities, global warming mitigation efforts, habitats and sources of food and energy for animals, and supply of raw materials for industrial and pharmaceutical purposes. Maintenance of soil health is, therefore, vital to ensuring the sustainability of ecosystem services and is intrinsically linked to improving environmental and human living conditions. To address the priority soil health and its sustainable management, FAO will organize the global symposiums on soil erosion, soil biodiversity and nutrition‐sensitive agriculture (soil fertility) in 2019, 2020, and 2021, respectively.
___________________________
Dr. Niino is a technical officer in the Land and Water Division at FAO.