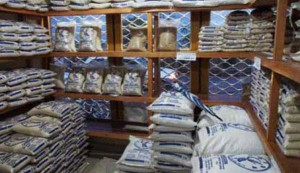 The Republic of Cameroon is often described as “Africa in miniature” because of its rich diversity of climate, ecology, landscape, and culture. Few are aware that the country has huge potential to not only achieve rice self-sufficiency but also become the rice granary of Central Africa.

The country is endowed with large areas of arable land, abundant water resources, and favorable agroclimatic conditions that are conducive to rice production. Recognizing its agribusiness potential, and in response to the food crisis that severely affected Cameroon in 2008, the government is taking measures to revitalize the rice sector.

These government efforts to improve the country’s food security are supported by the World Bank, the International Fund for Agricultural Development, the Japan International Cooperation Agency (JICA), the African Development Bank, and the Food and Agriculture Organization of the United Nations (FAO) .

Rice is still a relatively new crop in certain areas of Cameroon although the Far North, Northwest, and West provinces have a long tradition of rice cultivation.

Moreover, rice is increasingly becoming an important commodity fueled by shifts in consumer preferences and rapid urbanization. In Tonga, for example, homage is paid yearly to the farmer who introduced rice in the region. Here, local rice is preferred over imported varieties; when quality concerns are met, consumers are prepared to pay a premium for local varieties.

With renewed interest in the rice sector in recent years, the government is strengthening the country’s rural infrastructure such as irrigation, milling and processing facilities, and farm-to-market roads.

Government-owned corporations, such as the Company for the Expansion and Modernization of Rice in Yagoua in Far North province and the Upper Nun Valley Development Authority (UNVDA) in the Northwest province, are being revamped to support rice farmers.

The company also provides a market for farmers by buying rice from them. “Thanks to the UNVDA support, I have been able to pay school fees for my children and medical bills from the sale of my rice harvest,” remarked Mr. Ako Thea Francis, a rice farmer from Ndop.

The Institute of Agricultural Research for Development is a public institution that has been collaborating with international partners to develop improved rice varieties and technologies to increase rice productivity in the region. Technology packages developed by IRAD are shared to farmers for faster adoption.

Highlighting the vital role of research in the revival of the rice sector, IRAD Director General Noé Woin said, “The government recognizes the need to support a strong research and development program to develop improved technologies for smallholder farmers to help them raise their output and income.”

But, despite all these efforts, some constraints hinder the country from expanding and intensifying its rice production. These challenges include a lack of good-quality seed and adequate equipment for labor-intensive tasks, and a lack of postharvest technologies to make local rice competitive in the market.

The country’s rice production has not yet been able to keep pace with the increasing demand. Over the last few years, its rice self-sufficiency ratio has been less than 20%, according to the United States Department of Agriculture and FAO. In 2012, Cameroon produced 102,000 tons of paddy rice and had to import up to 375,000 tons of rice to meet its demand.

Another constraint is the long distance between the major rice production facilities and the main cities, which are filled with imported rice rather than “Cameroon-made” rice.

“Thus, JICA has launched a program to support mainly the production of upland rice in the Center, South, and East provinces of Cameroon, so that people living in these areas can eat their own rice,” said Dr. Yoshimi Sokei, a JICA advisor based in Yaoundé.

The National Rice Development Strategy, drafted in 2009 within the framework of the Coalition for African Rice Development, has an ambitious aim to raise domestic production to 627,250 tons by 2018. To achieve this vision, the Cameroon government has deployed the following strategies.

Some challenges are being tackled through collaborative research such as the innovative Common Fund for Commodities (CFC)-funded project on “Improving the competitiveness of local rice in Central Africa.” Carried out by AfricaRice and its national partners from Cameroon, the Central African Republic, and Chad, it aims to build rural enterprises through co-sharing mechanisms.

Upland and lowland NERICA varieties selected through participatory varietal selection were introduced along with improved crop management practices to boost rice productivity. After that, the project established a “rapid-impact” seed program, postharvest technologies, processing activities, and links with input dealers and microfinance institutions.

The quality-processing center in Ndop, which was inaugurated in 2013 by Cameroon’s minister of scientific research and innovation, testifies to the success of this model.

Quality rice as well as rice bran and other by-products are sold to both wholesalers and retailers. The production and marketing of rice flour have opened up new opportunities for women farmers who can process and sell rice-based products.

Cameroon is one of eight pilot countries that are partnering in a pioneering Canada- funded project to enhance the quality and marketability of locally produced rice through improved harvest and postharvest technologies.

The project, which is carried out by the Africa Rice Center with its partners, aims to develop and evaluate suitable harvest and postharvest technologies that help produce quality rice products that respond to market demand.

The project gives households opportunities to raise their income by promoting the development of new rice-based products and rice by-products. Now, it is exploring the use of rice for producing fortified food items.

“Strengthening the capacity of rice stakeholders throughout the value chain, from farmers through millers and parboilers to marketers, is a major part of the project,” said Dr. Jean Moreira, AfricaRice project coordinator.

The Cameroon rice sector is increasingly benefiting from collaborative research for development activities carried out by AfricaRice and its partners with support from several donors, including the AfDB, CFC, Canada, the European Union, Japan, the Arab Bank for Economic Development in Africa, the Bill & Melinda Gates Foundation, and the Global Rice Science Partnership, the CGIAR Research Program on Rice.

IRAD is involved in all the Africa-wide Rice Task Forces covering breeding, agronomy, processing and value addition, mechanization, policy, and gender. It has welcomed an approach, rice sector development hubs, for greater coherence and impact and has identified three hubs representing the main rice ecosystems in the country.

With all these measures in place, Cameroon is well on its way to realize its vision for a high-quality rice sector serving the entire region.