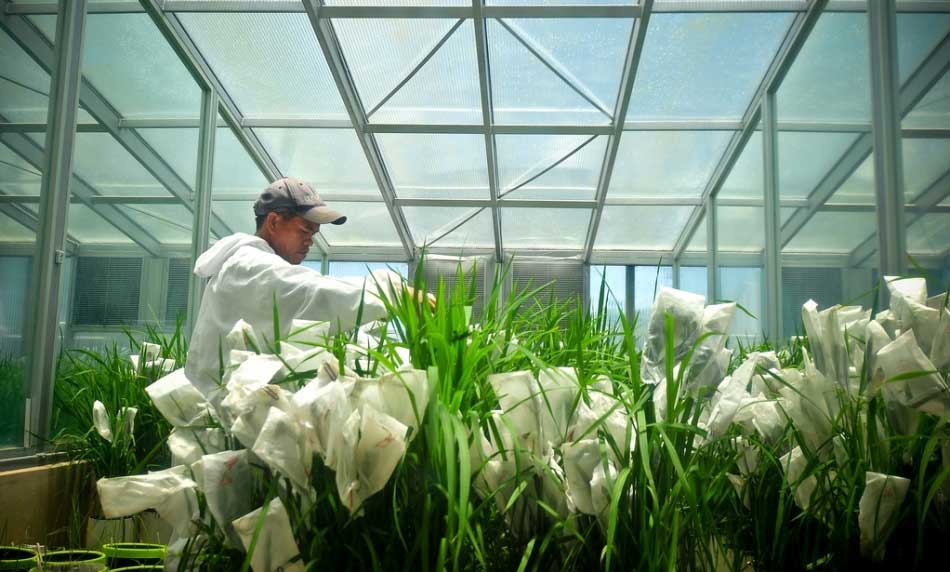 Scientists are now attempting to introduce C4 photosynthesis, including the required changes in the leaf structure, into rice. The good thing about C4 rice is that it can thrive under high temperature caused by global warming, and with a decreasing fertilizer and water supply.

If research is successful, the C4 rice varieties could be available to farmers in another 15 years. By 2035, farmers could adopt them in irrigated areas.

So, in the future, how much would the yield gain of C4 rice be in South Asia, where many rice consumers live? To help answer this question, we used ORYZA2000, a rice growth simulation model, combined with the C3 and C4photosynthetic modules from GECROS.

In one simulation set, we assumed that 220 kg of nitrogen was applied per hectare of rice area, and we used spatial soil data and weather from three climate scenarios between 2035 and 2040 with corresponding increases in atmospheric CO2 level. The other simulation set used the current CO2 of 400 ppm.

NOTE: The results are expressed as averages of three future climate scenarios and weighted averages of rice pixels in each state/province.

At the current CO2, the yield gains of C4 rice could be more than 40% in Kerala, Odisha, Andhra Pradesh, and Karnataka in India and in Khulna Province in Bangladesh. But, at a higher CO2 level in anticipation of climate change, yield gains are lower. The reason for this is that CO2 concentration is already high in the bundle sheath cells of C4 rice so it won’t be able to take much advantage of the increase in atmospheric CO2 level. Even with this setback, the virtual C4 rice could still yield an impressive additional 26– 40% in Andhra Pradesh, Karnataka, Odisha, and Kerala in India, and in Barisal and Khulna provinces in Bangladesh.

Yield gains across South Asia would vary because of the interaction between soils and climate. Generally, the yield gain of C4 rice would average 32% at current CO2 level. At higher CO2 level, on the other hand, the average yield gain would be 21%.

These initial results suggest that appropriate location-specific C4 rice cultivars, fertilizer doses, and management options will further improve these yield gains. This clearly shows the importance of the development and deployment of C4 Cultivars for global rice production to keep up with increased rice demand.

Note: This work is a part of Global Futures for Agriculture: Integrated Modeling and Scenario Assessment funded by the Bill & Melinda Gates Foundation and the International Food Policy Research Institute.

Dr. Mottaleb is a postdoctoral fellow in SSD. Dr. Nelson is the head of GIS Laboratory at IRRI.