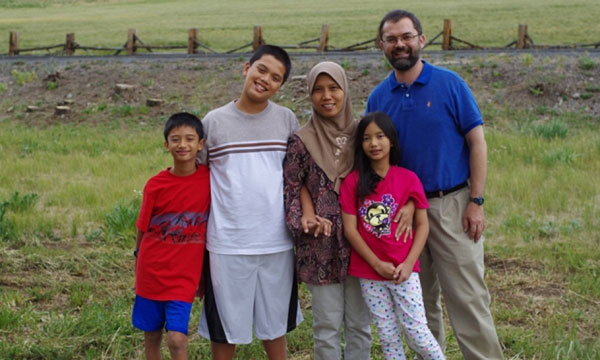 A family portrait of scientists Michael and Septi, taking time off from their rice laboratories with their children Ilham, Irfam, and Atiya. (Photo: Jon Schroeder)

At first glance, Endang Septiningsih and Michael Thomson are worlds apart. Dr. Septiningsih was born and raised in Indonesia. Dr. Thomson hails from the southwestern United States. Despite the distance of some 15 thousand kilometers between them, fate, science, and a common passion to improve rice and farmers’ lives found a way to bring them together.

Septi, as she is called by her colleagues at the International Rice Research Institute (IRRI), had a keen interest in plant breeding as an undergraduate student in Gadjah Mada University, Yogyakarta, Indonesia. She then became a researcher at the Indonesian Center for Agricultural Biotechnology and Genetic Resources Research and Development (ICABIOGRAD) in Bogor.

“Rice is a part of my life and rice cultivation in Indonesia is usually done by smallholder farmers,” she said. “My dream is to help them.”

Michael’s love affair with rice was less direct. He became interested in plant science when he joined a high school summer program on plant biotechnology at the University of Arizona. “Even as an undergrad, I didn’t have an agriculture background so I was more interested in pure science and genetics,” he said.

In 1997, Michael attended Cornell University to pursue his interest in molecular genetics, where Septi happened to be working toward her PhD in plant breeding with Susan McCouch as her adviser. Dr. McCouch, a renowned rice scientist, spent 5 years at IRRI before joining the Cornell faculty.

“When I moved to Cornell, I spent some time working in two labs on wheat and tomatoes,” Michael said. “Finally, I worked with Dr. McCouch. Rice was the one that got me most excited.”

Like the protagonists in the film When Harry Met Sally, they started off as colleagues and friends. “We were classmates and we were part of a study group with several other people from different countries,” Septi recalled. “Then we became close friends after we both studied under the same adviser.” Michael and Septi got married in 1999 and they had their first two children, both boys, while at Cornell.

After completing their postdoctorates at Cornell, Michael started looking for work, but Septi felt it was time to move back to Indonesia. She wanted to give back to the Institute that allowed her to study at Cornell for her PhD. It was a decision that Michael fully supported.

“We were trying to find something that would advance both of our careers,” he said. “Going back to her home institute was important to her. For me, I wanted to get that international experience.”

In 2003, Septi returned to ICABIOGRAD, where she worked on varietal identification and diversity analysis of the germplasm of major Indonesian crops such as rice, soybean, and sweet potato. Michael, on the other hand, received a grant from the National Science Foundation International Research Fellowship Program to study the genetic diversity of traditional and improved Indonesian rice varieties, also at ICABIOGRAD, for 2 years.

After completing his fellowship, Michael then found an opportunity at IRRI, where he was accepted as a postdoctoral fellow with Dr. Abdelbagi Ismail, plant physiologist and coordinator of the Stress-Tolerant Rice for Africa and South Asia (STRASA) project, in mapping quantitative trait loci (QTL)—stretches of DNA containing or linked to genes responsible for important traits—and marker-assisted breeding of salt-tolerant rice. Septi was also accepted as a postdoctoral fellow to focus on the development of flood-tolerant rice with Dr. David Mackill, former head of IRRI’s Plant Breeding, Genetics, and Biotechnology Division. They moved to the Philippines in 2005, with their two boys and 2-month-old daughter.

“For a professional couple in the same field of research, it’s quite difficult to find a place where we can both work and do our research on rice,” Michael said. “In that aspect, IRRI is the perfect place for us.”

Today, Septi leads IRRI’s work to identify traits to help develop new flood-tolerant rice that can survive different types of flooding at different stages of the rice plant’s development. This includes looking for genes and QTLs that help direct-seeded rice to germinate even when flooded (anaerobic germination), and protect rice plants when submergence is complete or when floods of 20–50 cm remain in the field (stagnant flooding).

“We search for new QTLs and genes,” she said. “Every time we have something good on the genetic side, we incorporate it in our breeding to develop new rice varieties that are particularly suited for changing climatic conditions.

“Flood-tolerant rice varieties are particularly important because more than 15–20 million hectares of land, mostly in Asia and some parts of Africa, are prone to flooding.”

His role includes validating new DNA markers and looking for new technologies to further improve the efficiency of the lab. “I enjoy exploring new technology that in the end can really help the breeders,” he said. “Connecting the diversity and breeding applications is really exciting. The main impact I hope to offer is to make breeding faster. It can take 9 or 10 years to develop a new rice variety. If there’s a way we can help breeders do that in, say, 6 years instead of 10, we can release new and improved varieties faster.”

Chemistry, in and out of the lab

Science is a competitive field. Its history is fraught with intellectual feuds and rousing debates between disagreeing scientists. Does science, which brought Septi and Michael together, also work against their careers and marriage?

“Our interest is genetics but we are not competitive,” said Septi. “We are complementary because our work is different. My first research area at IRRI was submergence while he worked with salinity. We support each other.”

In fact, Michael said being married to a colleague has its advantages. “We get to bounce ideas off each other,” he said. “If we have problems at work, sometimes we can help each other solve them after office hours.”

Septi agrees. “At home, we can have work-related discussions. If I need to use his laboratory facilities and get help from his staff, we can talk about it while in the car or when we are shopping.”

With both being scientists, they also understand the needs and pressures of each other’s job and give each other advice.

“She reminds me to focus and not neglect the things that are important for my own career,” Michael said. “I can get distracted by many activities at work. People often ask me for help about software and different things. I fall behind in writing publications of my own.”

Michael also has advice for Septi. “Sometimes, I feel overwhelmed because a lot of stuff is going on at the same time since I have more responsibilities now,” Septi said. “Michael tells me not to worry too much. Just take it easy.

“It can be a struggle at times,” she added. “Sometimes, we have a lot of work even during the weekends. But, we make sure we spend quality time with our kids since it is also our responsibility to raise them to be successful.”

They also have to coordinate their schedules, including attending scientific conferences. “At the start of the year, we discuss who goes to what conference because we try not to leave our children alone,” Septi said. “Although on some occasions we do, but just for a couple of days.”

Were there moments when they considered shifting jobs and having only one scientist in the family? “If she’s more successful, then I can retire early,” Michael joked. “But we are both committed to our careers. We can’t really imagine if either one of us stops being a scientist.”

American millionaire Dennis Tito recently announced his plans to fund the first manned mission to Mars in 2018. The voyage would take 501 days, round trip, and could include an adventurous married crew. Could Septi and Michael’s professional and personal relationship survive such an ordeal?

“We could probably handle the journey but we might drive each other crazy,” Michael said in jest. They would rather stay right here on Earth and hopefully see their dreams, as scientists, come true.

For Michael, that would be having all the rice genomes in IRRI’s International Rice Genebank—which has more than 117,000 types of rice— sequenced and characterized to the point where scientists can just pick the desired version of the gene they need in their breeding programs.

“Having an integrated database that contains all the genetic information about all the rice in the International Rice Genebank is something I’d really like to see as a resource for breeding programs,” Michael said. “There’s so much potential, but, so far, we don’t have the sequence and trait data to do it efficiently.”

Septi shares this vision with Michael. “I want to use certain genes in my trait development program to speed up the development of new varieties.”

Behind the high-end technology and the intricate science of molecular genetics and breeding, the two scientists have a singular pragmatic target. They want to help farmers all over the world by developing better rice.

“My ultimate goal as a scientist is to make rice farmers happy by helping them harvest more rice and have better incomes,” Septi said. Michael, her fellow scientist and husband, couldn’t have said it any better.

Mr. Santiaguel is the associate editor of Rice Today.