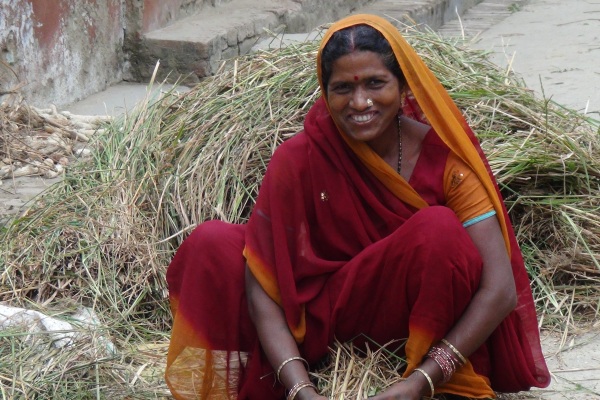 THE STRAW of Sahbhagi dhan, a drought-tolerant rice, is a popular cattle feed. (Photo: Lanie Reyes)

A car can usually travel down the narrow concrete road in Nagwa Village of Maharanjganj District in eastern Uttar Pradesh. However, during this second week of November—harvest time in the fields surrounding the village—piles of rice straw clogged the way, making passage virtually impossible.

Most of the women, including Prabhawati Devi, were busy cutting the straw and piling it neatly on jute sacks that were cut open to serve as mats for the straw. As she was gathering the edges of the stalks, Mrs. Devi said with a smile, “These are Sahbhagi.” Sahbhagi is what the farmers and villagers call Sahbhagi dhan, a drought-tolerant rice variety released in India in 2009 (see Making rice less thirsty). The straw of Sahbhagi dhan is popular among the women in Nagwa, who feed it to their cattle.

It’s a woman’s life
Brick and mud houses, scattered along the road of Nagwa, are not big enough to shield from view the residents inside as they go about their daily chores. One woman was cooking just inside her front door, squinting under the almost-midday sun and shielding her eyes with her hands from the smoke of the burning fuelwood.

Outside her house, another woman was threshing rice manually—raising her arms as high as she could as she smashed a bunch of rice stalks on a surface covered with fine mesh net. She gathered the separated grains with her hands, placing the grains at the center of the net and putting the empty stalks neatly to her side. She rose once in a while to straighten her back from her squatting position. Yet another woman had just returned from harvesting rice bundles in the field. Women often harvest rice in staggered shifts because they want to give the fresh rice stalks to their cattle.

Nagwa looked like a village of women in a flurry of activities. Their bright saris made them more visible under the bright, scorching sun.

“As more men migrate from rural areas to the cities to look for ‘greener pastures,’ women then take on the farming activities that the men leave behind,” commented Abha Singh, an associate scientist based in Faizabad, eastern Uttar Pradesh. She is one of the many women who Thelma Paris, a gender specialist recently retired from the International Rice Research Institute (IRRI), took under her wings (see Blazing the trail of women’s empowerment).

An all-or-nothing gamble
In eastern Uttar Pradesh, where rice production is predominantly rainfed, growing rice is so risky that farmers take a gamble every cropping season and can only hope for the best. They have no choice but to place their bet. When luck is on their side, during a year with ample rainfall, the farmers are blessed with enough food to sustain their families till the next cropping season. But, when drought strikes, the price of crop failure means losing all their investments— labor, seed, and inputs—and long, lean, hungry months ahead.

“The eastern part of India was considered a ‘hunger belt’ that is why IRRI started working on the dissemination of stress-tolerant rice varieties in 2008 through the Stress-Tolerant Rice for Africa and South Asia (STRASA) project,” said Umesh Singh, STRASA’s regional coordinator. In 2007, Dr. Singh, along with other IRRI scientists, successfully convinced the Bill & Melinda Gates Foundation that this project would provide much-needed assistance to these farmers.

“The project aims to develop rice varieties that can withstand flood, drought, and salinity, among other stresses brought about by climate change,” he added. “We call these new varieties ‘climate-smart rice’.”

STRASA researchers evaluate these varieties, including participatory varietal selection (PVS) involving farmers. Gender is integrated into most activities under STRASA and the Global Rice Science Partnership (GRiSP), the CGIAR Program on Rice, that aim to give women farmers input into the selection of improved rice varieties that are approved for release. It also helps in creating awareness among the farmers even before the formal release of a variety. This participatory varietal selection process, modified by Dr. Paris and her research team, initially required that women make up at least 30% of the participating farmers. Women’s participation will hopefully increase to 50% in the next phase.

“STRASA works with the national research partners to get the varieties released and notified for commercial cultivation,” explained Dr. Singh. “It also works closely with the developmental organizations including federal and state governments for the outscaling of new varieties.”

A refuge of a woman farmer
Women farmers such as Mrs. Devi are benefiting greatly from STRASA. Her concrete house has sturdy concrete posts; its blue paint faded just slightly, hinting that she has lived there for just a short time. As I made myself comfortable on a wooden stool, I noticed a gathering crowd of women, children, and some men blocking the natural light coming in from the door. Mrs. Devi grabbed a chair and sat in front of me. Her smile concealed her age and the hard life she has endured.

“This year, I harvested around 22 quintals per acre of Sahbhagi on my three acres of land,” she said excitedly. (Twenty-two quintals is equivalent to 2.2 tons and one acre is 0.4 hectare.) “Over the last two years, when planting Sahbhagi, I earned around 20,000 rupees (about US$330) per acre.”

Dr. Singh confirmed that the average yield of Sahbhagi dhan is 4 to 5 tons per hectare when other traditional varieties yield only about 2.5 tons under normal conditions. “What is remarkable is that even under severe drought, where traditional and other high-yielding varieties often yield nothing, Sahbhagi dhan can still produce 1 to 2 tons per hectare,” Dr. Singh said. And since Sahbhagi dhan is a short-duration crop that matures in 105 days (medium- to long-duration traditional varieties take 120–150 days to maturity), another bonus is that farmers can plant the next crop earlier giving them enough time to plant three crops in a year!

Mrs. Devi plants peas, after rice, and then follows with onions. She usually earns $750 from her peas and as much as $580 from the onion crop. For the last two years, she has also been selling Sahbhagi seeds at about $0.50 per kilogram compared to $0.25 per kilogram when sold as grains. This gives her an extra $250.00 per ton of rice.

While a traditional variety such as Sarju55 requires four irrigations, Sahbhagi dhan requires only two. Farmers can save up to two irrigations; each irrigation usually incurs an energy cost of $30. Therefore, farmers planting Sahbhagi dhan can save $60 per crop.

Empowered gender
The strong-spirited Mrs. Devi is known in the village for having a progressive outlook. She took on the role of the family breadwinner when her husband was stricken with hypertension and a heart problem, making him unable to work.

“God has blessed me with four cows, so no worries,” she said with an air of cheerfulness that never left her face since I met her two hours ago. Cows are considered “helpmeets” in rural India as they provide milk, a source of protein for the family. She sells some extra milk to her neighbors. A cow can assure them of an additional income of about USD 3.00 a day. Cows will continue to give milk for several months as long as they are healthy and well-fed. This is why Sahbhagi dhan straw is very important in most farming households.

“Four of my five daughters are married,” she proudly related. In her village, a married daughter implies that a household has a healthy financial status because the cost of the dowry can range from USD 400 to more than USD 800—an amount that is difficult to come by for ordinary farmers.

“My life is now easier as I have only one daughter left to marry,” she said. After that day comes, Mrs. Devi dreams of enhancing her “oasis” by purchasing a new house and maybe even a new car. She already owns a second-hand white van that she rents out as a public utility vehicle.

When a young man in his early twenties approached Mrs. Devi, she proudly introduced him as her son, who graduated from a three-year college course and now works in Bombay. Mrs. Devi has become an inspiration to other women in Nagwa. She has been able to save $800 through a self-help group (SHG) for women. This amount was added to the SHG’s capital that is available for loans to members at very low interest rates. They can use the money for household or farm-related needs.

At the end of each year, they distribute dividends among themselves. One woman farmer bought a pair of earrings from the dividend she got. “This speaks a lot about these women,” Dr. Paris later pointed out. “The money they’ve earned themselves can now be used in any way they want. To them, jewelry is a valuable asset they can claim their own. They can sell it, use it as collateral for more loans or give it as a gift for a daughter’s dowry. This is empowerment in plain clothes.”
___________________
Ms. Lanie Reyes is the managing editor of Rice Today.