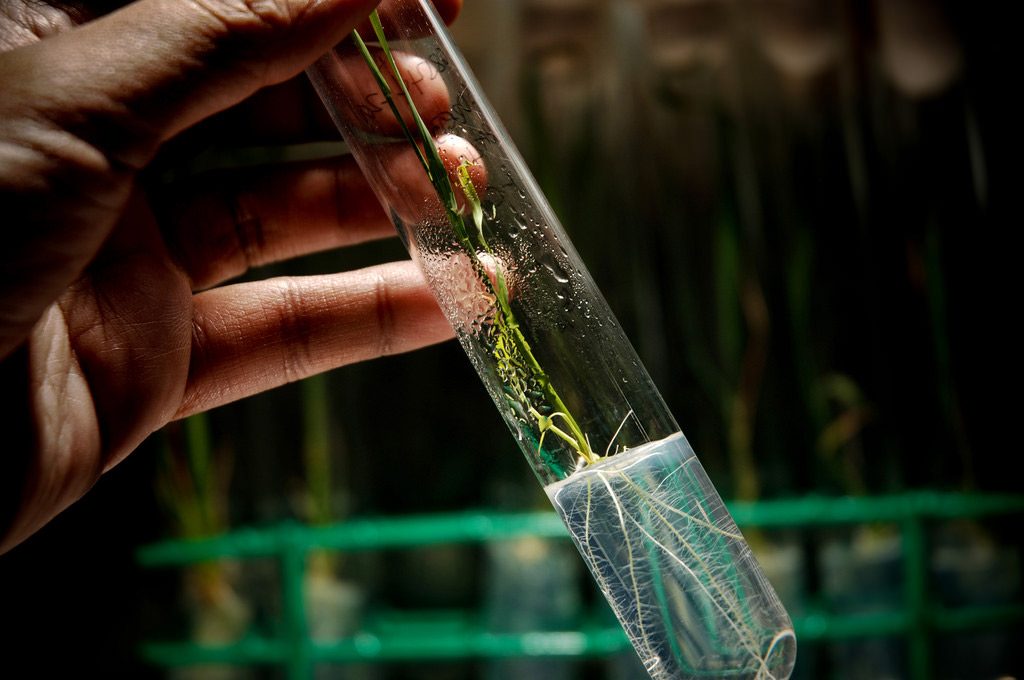 New rice varieties have revolutionized rice production around the world. Despite devastating stresses attributed to climate change, farmers now have more reasons to hope and expect rice to cope and provide enough yield. Submergence-tolerant rice, for example, can survive floods. Drought-tolerant rice can withstand heat and lack of water. Plant breeders took many years to develop these varieties. Many more are in the pipeline and they will soon power the next agricultural revolution. Meanwhile, allow us to briefly take you through the process that gave birth to these improved varieties.

Farmers were the earliest rice breeders. In pursuit of higher yields and better grain quality, they selected superior plants over average ones. Because of this, they were responsible for rice improvement until 1900. During that year, scientists rediscovered Mendel’s law of inheritance, which laid the foundation of breeding. Soon thereafter, systematic breeding began and progressed.

Now, plant breeding is the art and science of changing and improving the hereditary traits of crop plants, such as high yield; multiple resistances to major diseases, insects, and other environmental stresses; and better grain and nutritional quality, to meet human needs. Over the past four decades, annual world rice production has increased from 252 to more than 600 million tons. This is mainly because of the development and adoption of new high-yielding, fertilizer-responsive, semidwarf varieties accompanied by appropriate production technologies. However, by 2025, we will require 25% more rice to meet the growing need of the human population.

Rice production, though, is continually threatened by a series of biotic stresses (blast, bacterial blight, tungro, brown planthopper, sheath blight) and abiotic stresses (drought,submergence, salinity, heat, cold, soil toxicities, etc.). So, the major challenge is to overcome these stresses and produce more rice with less land, less water, fewer chemicals, and less labor in the context of global climate change. This is where breeding new and adaptive varieties comes in.

Breeding a new variety involves different steps as shown in the Figure. However, these should be seen as broad guidelines involved in the development of varieties through conventional and marker-assisted breeding. This scheme could be modified in several ways depending upon the target traits, breeding methodologies, and rice production systems, which vary from one to three cropping seasons in a year.

The following steps are involved in breeding a rice variety:

After making an initial cross, it usually takes 8–10 years (or 16–18 seasons) to develop a new rice variety using traditional techniques. However, recent advances in molecular marker technology and genomics have offered opportunities to accelerate rice breeding and the release of varieties to farmers.

Molecular techniques can be integrated into traditional back crossing methods to allow plant breeders to quickly and precisely transfer a particular trait that is lacking in a popular variety, without significantly altering its salient characteristics—thus speeding up the creation of the improved version of the variety. Molecular markers serve as tags to select the target traits in the laboratory, thus avoiding the cumbersome process of growing many progenies in the field. It is worth noting that this is a conservative breeding strategy involving the improvement of already existing varieties that lack a few traits desired by farmers.

Breeders were able to save time both in the development of an improved variety (3 to 4 seasons) and in the evaluation and release processes of such a variety (another 3 to 4 seasons) through marker assisted selection (MAS). In some countries, such as India and the Philippines, MAS products have already been fast-tracked by the VRCs. It is hoped that the VRCs of other countries will adopt similar steps in the near future to accelerate the release of such breeding products.

Transgenic breeding is another way of developing new rice varieties, especially when genetic variability for target traits is either limited (e.g., sheath blight, stem borer) or altogether lacking (e.g., pro-vitamin A/Golden Rice) in the germplasm. Transgenes for useful traits can be transferred into desirable genetic backgrounds using MAS. In certain cases, transgenes for a specific trait can also be stacked together for added advantage. However, the development and release process of transgenic products is variable and depends on the biosafety guidelines and regulatory processes of each country. So far, no transgenic rice has been released for commercial cultivation by farmers.

In many countries, variety release is restricted by seed laws or regulations. But some countries do not have any specific regulations governing variety release. The decision to market a variety is then left to breeders’ discretion and initiative. Variety release systems vary in different countries according to the regulatory framework. National seed boards established VRCs to review and evaluate the new varieties bred by both the public and private sector.

However, varieties can be recommended by either the VRC or a duly designated multisectoral and multidisciplinary reviewing body. This group reviews the varieties based on agreed-upon norms and standards and they make their recommendations based on the results of multilocation performance tests and registration data submitted by breeders.

Dr. Virk is also a plant breeder in PBGB.