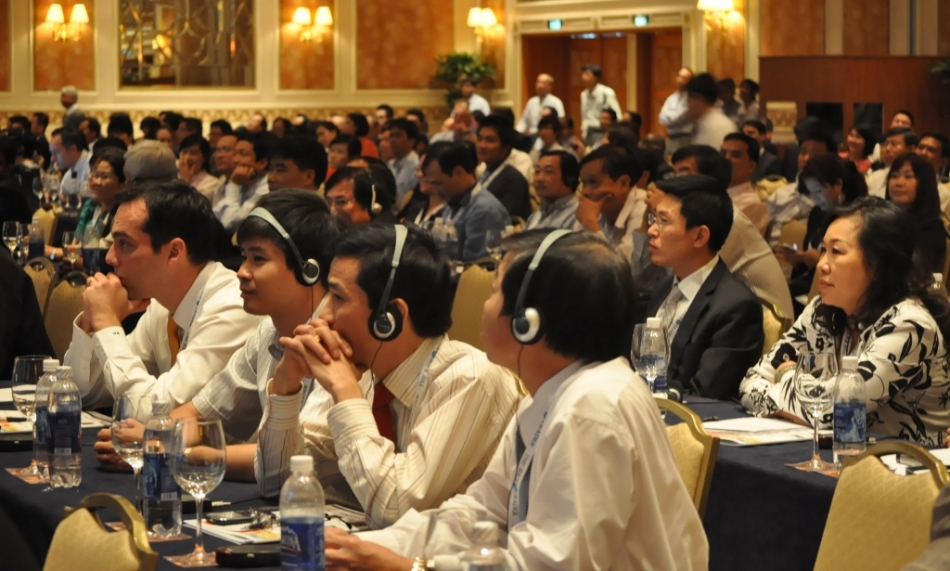 India’s export machine emerged as the talk of the town in Ho Chi Minh City during The Rice Trader’s (TRT) 3rd World Rice Conference, because of the country’s re-entry into nonbasmati rice exports with prices almost half of those of the biggest rice exporter, Thailand. Clearly, policy and climate change still make price watching more unpredictable than ever.

More than 500 rice traders, experts, policymakers, and other key players in the market from all over the world participated in the three-day conference (19-21 October) held at the Sheraton Saigon Hotel in Vietnam. 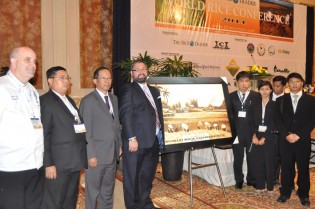 Talks of the trade: the import side
Setting the mood for the conference, TRT President and CEO Jeremy Zwinger gave a general overview of the global rice trade: India’s back-to-back news of lifting the export ban in September and its notably low prices; the Thai flooding, which delayed the impact of the government’s rice-buying program; and the risks in planting rice compared with planting other crops, thanks to climate change and the shifting global supply/ demand equation. According to Mr. Zwinger, these “game changers” caused the market to be volatile and it will continue to be volatile.

Vice Minister Bui Ba Bong of Vietnam’s Ministry of Agriculture and Rural Development shared a positive outlook on Vietnam’s rice exports despite the flooding of rice paddies in the Mekong Delta and India’s competitive prices that challenge the country’s market share.

When asked about possible deals with countries other than Vietnam—its major exporter— Administrator Banayo said that NFA is open to such deals. “Our population has been growing fast and our rice production has not been able to cope with the consumption,” he said. He backed this up with the country’s annual per capita consumption of rice, which is 119 kg, multiplied by millions of rice consumers. Furthermore, recent blows from typhoons account for an average production loss of 477.8 thousand tons.

Bangladesh and Indonesia showed a striking resemblance in their country reports in terms of growing population and increasing demand. Rice production in Bangladesh is currently 32.6 million tons for a highly dense population of 150 million, according to Iladi Dad Khan of the Ministry of Food and Disaster Management, Bangladesh. Indonesia, on the other hand, has more than 240 million people and its rice production in 2011 was 42.70 million tons, which was below the target.

President Director Sutarto Alimoeso of Perum Bulog, the world’s current top importer, emphasized, “We don’t want to disrupt the market.” Thus, he pointed out that Bulog is working on a price stabilization policy.

Another highlight of the event was the annual Rice Tasting Contest, now in its third year. It was judged by Chef Michael Cross, winner of the Lord of Rice Chef Contest in 2011. The Myanmar Rice Industry Association won the World’s Best Rice 2011 with its entry, Myanmar Pearl Pawsan specialty rice.

The Myanmar Rice Industry Association and International Rice Producers were neck and neck in the contest but Myanmar pulled ahead with 14 out of 15 points.

This is the first time that Thai rice did not win this contest. International Rice Producers placed second with Thai Jasmine rice, Riso Gallo from Italy placed third with its Venere Black Rice variety, Xian Na Lan from China came in fourth with its entry of Hom Mali rice, and fifth place went to Genesis Grains with Premium Calrose rice from California.

The export side
On the export side, Korbsook Iamsuri, Rice Exporters Association president in Thailand, shared that the country is facing three “new things,” which dominated the market in 2011. These are new leadership in the government after the elections; the severe flooding, which was dubbed “the most severe deluge in decades”; and tough competition with India. Ms. Iamsuri reported that, under the pledging program, the Thai government plans to buy unlimited grain and release stock at a higher cost, but under “superstrict supervision.”

President of Amira Foods (India) Karan Chanana observed that traders constantly remark on India’s low prices, and Pakistan is following this trend. Analysts see this plunge in rice prices as an advantage as it offset what could have been a surge in prices brought about by the Thai pledging scheme. India’s prices were seen as an equalizer that came at the right time.

Why could India afford to pull prices down? According to Mr. Chanana, it is the increase in rice production area. India’s 2010-11 bumper crop reached 99 million tons, which is already its annual production, and it has a value of 1 trillion rupees (US$19.4 million).

Mr. Chanana explained that the rice industry forms the economic backbone of India because rice gives jobs to 70% of the country’s labor force. Basmati, which literally means “an aroma that pleases the senses,” is grown once a year in India and Pakistan only. A trade that is being dominated by India, basmati contributed to the steady increase in Indian exports from 1999 to 2010. He added that 95% of India’s exports are shipped to Saudi Arabia, the Middle East, and the United Arab Emirates. India’s rice accounts for almost a quarter of global rice production at 21.5%.

The global rice market and food security
IRRI economist Samarendu Mohanty reported that the IMF Food Price Index, which was on an upward slope from 2001 to 2011, reached its peak from 2008 to 2011. Unfortunately, parallel to this is the increasing number of hungry people.

Dr. Mohanty focused on the effect of current events on global food security, that is, the “tug of war in the global rice market.” He said that the rice price was pulled up by typhoons in Asia together with the Thai mortgage policy, and now it is pushed down as India resumes its exports of nonbasmati rice and its good 2011 crop. He further said that India’s reentry can actually “bring the global rice market to its knees” as it “nullified” the impacts of Thai policy.

Focusing on the Thai rice mortgage program, Dr. Mohanty commented that Thai taxpayers carry the burden since rice is expensive in the domestic market (which could have a weak infrastructure). Dr. Mohanty mentioned that, to meet world demand, 116 million tons of rice are needed by 2035 amidst the scenario of a slowdown in rice yield growth in the last decade.

Lastly, Dr. Mohanty emphasized the role of IRRI in outreach and training programs, research, and benchmarking of price. He said that the hurdles to food security are high government interventions, the lack of grading standards, and the absence or lack of a robust cash market. He recommends four ways to secure rice in the future: (1) revamp productivity growth (target: 1.0–1.5% per year), (2) allow rice to move across borders, (3) devise a mechanism for price discovery and price risk management, and (4) implement domestic market and policy reforms (organized retailing and direct income support to farmers).