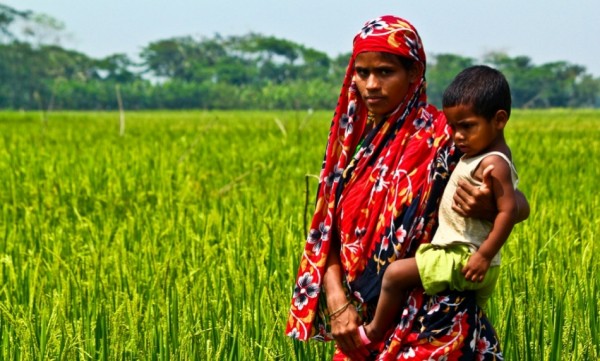 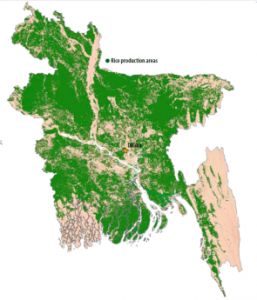 Surrounded by India Bangladesh is a country that is as culturally and historically rich. Having an agrarian economy as early as the 13th century, Bangladesh became a chief supplier of agricultural products, such as rice, to Asian traders and beyond during the 18th and 19th centuries, when British traders began exerting economic influence over the Indian subcontinent.In 1947, East Pakistan was formed from Bengal Province in what was known as the Partition of India under British rule. In 1971, East Pakistan became Bangladesh, but the outcome of the Indo- Pakistan war left the country struggling.Despite this ordeal, Bangladesh still managed to steadily increase its rice production, which grew from 16 million tons before independence to about 48 million tons in 2009. The introduction of high-yielding varieties, coupled with improved management practices by farmers, allowed farmers to increase their yield per hectare and attain an overall increase in the country’s rice production.Modern rice production technologies gave Bangladesh an impetus to become nearly self-sufficient in rice, despite punishing monsoons and floods. The country now faces other challenges: continuously rising population, decreasing agricultural land, shortages in water and other agricultural resources, and adverse effects of climate change.

Bangladesh’s partnership with the International Rice Research Institute (IRRI) started more than 40 years ago. In 1966, the government of then East Pakistan emphasized rice research within the Cereals Section of its Agricultural Laboratory in Tejgaon, Dhaka. Collaborative research to test rice lines from IRRI also began at that time with support from the Ford Foundation. In 1967, the first widely distributed semidwarf rice variety called IR8 was introduced into the country.

Focus was given to improving cultivation practices in cropping patterns; managing water, nutrients, rodents, and insect pests; and farm mechanization, among others.

Modern varieties
The adoption and spread of modern rice varieties, which began in 1967, played a crucial role in advancing and sustaining rice production for subsequent years in Bangladesh. This area of technological progress contributed greatly to the country’s efforts in achieving food security despite declining available land and a predominance of small farmers and tenants.

Steady increases in rice production helped the country gain food security despite natural disasters, including major floods in 1987, 1988, and 1998. IRRI’s efforts in this area facilitated the development of 55 high-yielding varieties, which include four hybrid rice varieties by BRRI, five high-yielding varieties by the Bangladesh Institute of Nuclear Agriculture (BINA), one each by two Bangladeshi universities, and two flood-tolerant varieties.

Two drought-tolerant varieties are in the process of release. With approximately 4 million hectares of land that perpetually suffer from drought and flooding, Bangladesh seeks to develop stress-tolerant rice varieties to cushion farmers against the impact of climate change.

IRRI works closely with national program scientists through Stress-Tolerant Rice for Africa and South Asia (STRASA), a project that aims for food security during calamities.

Although FoSHoL formally ended in 2009, most of the 2,200 established farmer groups still continue to increase their savings and invest in microcredit platforms. The project empowered the farmers to build on and access their own capital (instead of relying on credit).

The advent of machines
Farm machinery flourished in the country during the 1970s. Low-lift pumps as well as shallow and deep tube wells were extensively developed for irrigation. IRRI engineers extended their equipment designs and helped manufacturers produce complementary items, or adapt and modify IRRI’s designs to their local needs. Local institutions in Bangladesh also pursued agricultural mechanization. This involved initiatives or programs developed by BRRI, the Agricultural Engineering Division of the Bangladesh Agricultural Research Institute (BARI), Bangladesh Agricultural University (BAU), and Bangladesh University of Engineering and Technology (BUET).

Water management
The development of irrigation through deep and shallow tube wells during the 1970s helped fast-track agricultural development. Over time, however, these tube wells, which are also used for irrigating rice, have suffered from severe floods, intrusion of saltwater, or a lack of water recharge. Together with BRRI and the country’s Department of Agricultural Extension, IRRI then introduced alternate wetting and drying (AWD) technology as a water-saving technique, which Bangladeshi farmers described as “an incredible clock for irrigation.” It espouses irrigating the field only when needed by observing the level of water inside a plastic tube.

BRRI validated the technology at its seven regional stations covering more than 900 farmers’ fields. Records show that yield was higher by around half a ton per hectare and water savings ranged from 15% to 25%. Other private companies and NGOs such as Syngenta, Petrochem, and Practical Action became interested and also tried the technology. This consequently started its large-scale adoption, which involved thousands of farms and farmers.

Fertilizers
In collaboration with BRRI and DAE, IRRI introduced the leaf color chart (LCC) to help farmers more accurately estimate the amount of fertilizer to use and reduce wastage. During the boro season of 2010, a number of farmers used LCCs and the country saved 150,000 metric tons of urea fertilizer.

Another innovation by IRRI, “Nutrient Manager,” which also makes use of site-specific nutrient management principles, is under development for rice and maize in Bangladesh. This tool will be available in the future via the Internet and a mobile phone.

Rodents and insect pests
In the Chittagong Hill Tracts and other parts of the country, rats were reported to cause farmers severe losses in crops and grains. Rats invade people’s homes, bite people, and cause dysentery and fever (see When rats attack ).

IRRI’s Poverty Elimination through Rice Research Assistance (PETRRA) supported community efforts and the adoption of ecologically based rodent management in the area. Capacity development Aside from building the scientific expertise of many research and development workers through short-term training, IRRI has helped more than 200 Bangladeshi scholars attain their MS and PhD degrees. This has greatly increased the capacity of Bangladeshi rice researchers and has become an indirect instrument in the development of many improved varieties and management practices. IRRI continues to work with BRRI and other national partners so that capacity development remains an important objective of collaboration. Challenges ahead Conserving natural resources and tackling the impact of climate change remain a major challenge for rice research and development in Bangladesh. Improving productivity should also help reduce poverty, improve nutritional status, and bring gender equality. More than 20 initiatives in different areas are being carried out in Bangladesh in partnership with key organizations.
__________________________________________