Almost everyone acknowledges that the Green Revolution has substantially increased the yield and supply of cereals in the developing world during the past 30 years. However, some critics maintain that these improvements in productivity perversely encouraged farmers to specialize in growing cereals at the expense of other, more nutritious crops. The Green Revolution, they say, worsened the nutritional status of people living in developing countries. 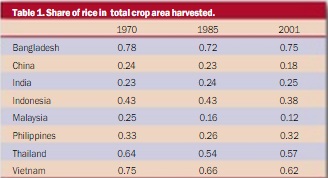 While the availability of modern rice varieties may have encouraged some farmers to specialize in growing rice, there is no evidence that such specialization has been widespread. Rice harvested area (hectares under rice multiplied by the number of croppings per year) has declined as a percentage of total crop harvested area in nearly all Asian rice-growing economies since 1970 (Table 1).

Thus, if some farmers increasingly specialized in rice, others must have diversified into other crops — and done so over a larger harvested area. Despite a near doubling of the total rice harvest, rice is now less dominant in Asian agriculture than it was before the Green Revolution. 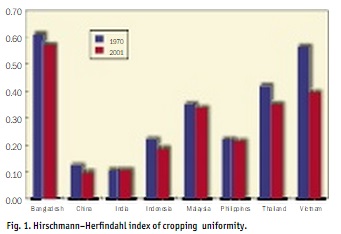 Overall cropping diversity — the variety of different crops planted — also seems to have increased since the  beginning of the Green Revolution. A widely used measure of concentration is the Hirschmann–Herfindahl index, in which 1 equals absolute uniformity and lower decimals indicate greater diversity. Applied to cropping systems, it shows that farmers in most Asian countries plant a wider variety of different crops today than was the case in 1970 (Figure 1).

The bottom line, however, is not what farmers grow but the nutritional value of the food people eat. Despite some critics’ impression that malnutrition in developing countries has worsened, the incidence of child malnutrition, at any rate, actually declined in these countries between 1970 and 1995, according to a recent study by Lisa Catherine Smith and Lawrence Haddad of the International Food Policy Research Institute. While the incidence of child malnutrition still stood at a dismal 31% in 1995, this reflected a reduction of one-third from the 46.5% recorded in 1970. 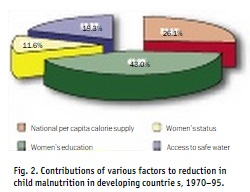 The study, which appeared in the journal Agricultural Economics,1 also shows that the greater availability of calories at the national level — a direct consequence of the Green Revolution — contributed greatly to the easing of child malnutrition during this period. The authors credit more calories per capita with one-fourth of the total reduction (Figure 2). The only factor making a greater contribution was improved education for women. This provided more mothers with the nutritional knowledge to make better use of available food to safeguard their children’s health.

David Dawe is an economist.