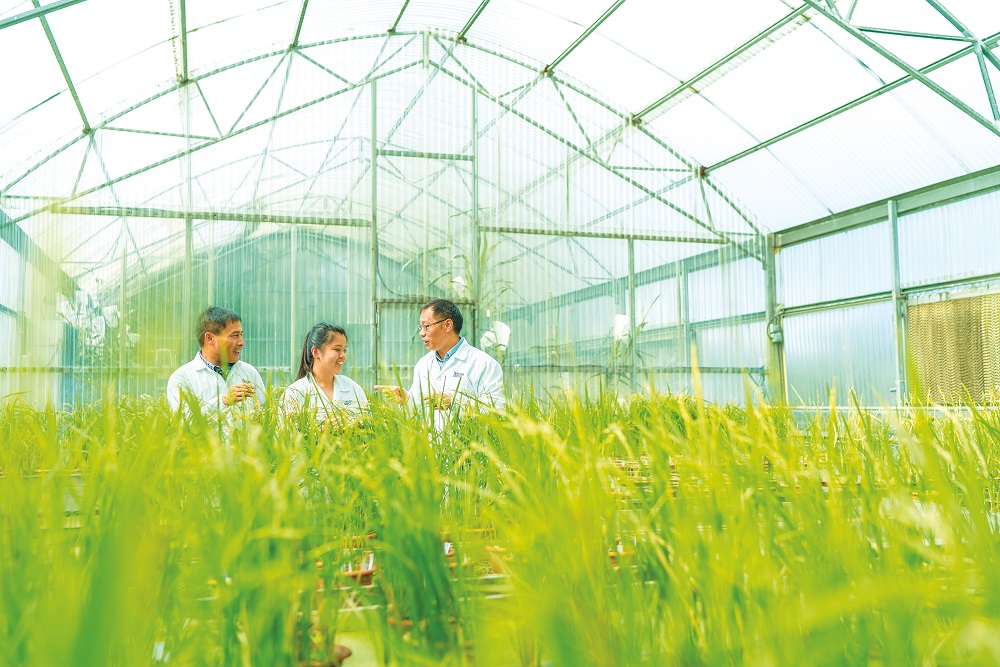 It is vital for the public, private, and philanthropic sectors to coordinate their efforts to bring innovation in the form of research and development as well as new business models to ensure the sustainable development and strengthening of the rice ecosystem.

Rice is a staple food crop for more than half of the world’s population and has fed more people over a longer time than any other crop. Today, rice cultivation is under threat from climate change as well as other biological and environmental stresses. Rice farmers are often at the mercy of unpredictable changes in weather conditions. Unable to proactively take measures to counter the potential consequences, they are vulnerable to natural disasters such as floods and droughts, which can significantly reduce rice yield. Additionally, rice farmers lose an estimated average of 37% of their rice crop to pests and diseases every year.

These challenges greatly affect the food security needs of many nations as well as the livelihoods of rice farmers. In 2008, we faced a global food supply crisis that led to increased food prices and food insecurity. One major impact faced by Singapore was the increase in rice prices that led to the re-evaluation of stockpiling strategies. The food crisis demonstrated the importance of a tiny grain to everyone—from farmers to consumers—and how vulnerable the entire rice cultivation ecosystem could be.

To confront these concerns, it is vital for the public, private, and philanthropic sectors to coordinate their efforts to bring innovation in the form of research and development as well as new business models to ensure the sustainable development and strengthening of the rice ecosystem.

In 2004, after a disastrous tsunami struck Banda Aceh, the capital and largest city in the province of Aceh, scientists at Singapore’s Temasek Life Sciences Laboratory (TLL) and Indonesia’s Syiah Kuala University (SKU) in Banda Aceh came together to develop a rice breeding program that could contribute toward the rebuilding of lives and livelihoods of the rice-growing community in Aceh. Supported by grants from Temasek Foundation International, the team worked together to develop improved and hardier local rice varieties suitable for cultivation under local conditions and conduct scientific training to help Indonesian rice researchers strengthen their capabilities to be able to carry out their rice improvement programs independently.

The success of this program led to a sustained effort by TLL to use modern breeding technology to accelerate the stacking of individually important traits in commercial rice lines, through marker-assisted breeding. Temasek rice is one such example.

Using selective breeding, Temasek rice was developed to be a high-yielding variety imbued with traits to naturally resist bacterial and fungal diseases as well as overcome environmental challenges such as floods. Its stalks are shorter and sturdier than in other rice varieties, making them less susceptible to lodging problems. Temasek rice has a medium-long grain with a pleasant fragrance.

However, laboratory-based R&D is only the beginning. Temasek rice became a reality on the shelves for consumers when a dedicated private enterprise worked with local farmer groups to jointly come up with a way to ensure that this innovation and its increased productivity and yield were shared with the local farming community in an equitable manner. For this to become a repeatable virtuous circle, Temasek Life Sciences Accelerator (TLA) was started to facilitate the coming together of innovators (both public and private), venture investors, commercial enterprises, community groups, and farmers to incubate, test, and rapidly deploy new ideas with novel business approaches to equitably distribute the fruits from innovation.

TLA strongly believes that, in a world with decreasing resources, technology plays an important role in food security by enhancing each unit of natural resource (such as land, water, labor, etc.) to multiply food production capacity in a more sustainable manner. As agriculture becomes more knowledge intensive, its role in ensuring food security can only be realized with new investments in R&D as well as a concerted effort to provide an opportunity for innovators, funders, the farming community, and end consumers to come together.

Temasek rice is one such innovation that was conceived from such an effort.
______________
TLA, a joint venture between TLL and Vertex Venture Holdings Ltd., is a Singapore company that aims to incubate, nurture, and grow life science innovations into early-stage companies within its go-to life sciences incubator.