Population growth is the dominant determinant of the demand for staple food. World population has more than doubled since the 1950s and has already surpassed 6.5 billion. It may increase another 3 billion before stabilizing in 2100. Over the next quarter century, the world population is projected to increase by 1.95 billion, mostly in the developing countries and in regions where poverty and hunger are widespread, such as sub-Saharan Africa and South Asia.

Developed countries may not need to increase cereal production any further as most now have a stationary population, with some experiencing an absolute decline—although this situation may change if petroleum prices continue to increase. The demand for maize and cassava, for example, may increase rapidly as they are used as raw materials in the fast-growing bio-fuel industry for the production of the petroleum-substitute ethanol (see Food or fuel? on page 42 of Rice Today Vol. 6, No. 1).

Developing countries, on the other hand, continue to struggle to achieve and maintain food-population balance. The potential for increasing the supply of food by expanding the land frontier has long been exhausted, particularly in Asia, where 60% of the world’s population lives. Land-saving technical advances that increase crop yield (productivity per unit of land per season) and the expansion of irrigation infrastructure have been the dominant factors behind the increase in the supply of staple food over the past 4 decades.

However, the potential for increased land productivity, like that initiated in the irrigated and favorable rainfed environments by the Green Revolution in the late 1960s, has almost been exhausted. Since the late 1980s, there has been a drastic slowing of yield growth for all cereal crops (see table, right). The growth in yield has decelerated from 2.4% to 0.9% per year for rice, from 3.8% to 1.3% for wheat, and from 2.7% to 1.6% for maize. For rice, yield growth has decelerated substantially since 1990 in China, India, and Indonesia, which together account for nearly 60% of global rice production and consumption. This slowing of yield growth is due to technological progress reaching a plateau in the irrigated ecosystem, limited expansion of irrigated area due to the growing scarcity of water, and continuing low yields in rainfed ecosystems due to the non-availability of technologies suitable for unfavorable environments. 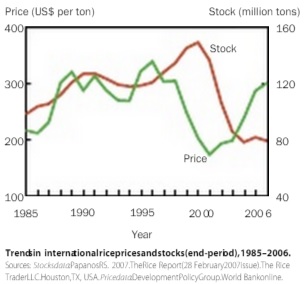 Since 2000, rice production has been growing at a slower rate than consumption, leading to depletion of stocks and an upward trend in rice prices in the world market (see figure, left). In early 2007, the price of medium-quality rice was 75% higher than in 2001. The rapidly growing rice prices now pose a threat to food security for poor consumers in many low-income countries in Asia, such as Indonesia, Bangladesh, and India.

These developments raise concern about the developing world’s ability to achieve and sustain food security in the future. The Green Revolution helped buy time in the continuous struggle to provide food for growing populations. But time is running out. The most promising strategy for sustaining food security in the face of growing population pressure is increasing the productivity of increasingly scarce land and water.

For rice, research must deal with several difficult problems: raising the yield ceilings of the current available rice varieties, protecting past yield gains in the irrigated ecosystem, and—using recent advancements made in genomics, genetics, and biotechnology—developing high-yielding varieties for rainfed systems that are tolerant of drought, submergence, and problem soils.

The speed and extent to which the rice research community can meet these challenges will depend on the level of resources that can be mobilized to support crop improvement research in the public sector.