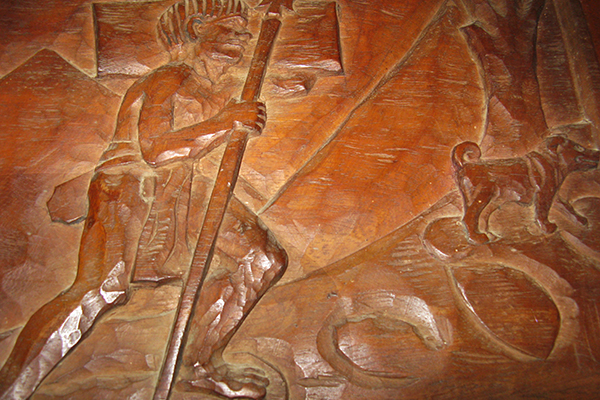 There once lived two young brothers, Wigan and Kabigat, who lived with their father, Pudol, in Kayng, a prosperous village in Kiyangan. The gods blessed them with a good life, plenty of chickens, pigs, ducks, dogs, and other precious possessions.

Upon learning from their father that the dogs were for hunting wild animals, the brothers prepared for a hunting trip. When everything was ready, they fastened their scabbards to their waists, tucked in their betel nut bags, carried their backpacks, pulled out their shining sharpened spears and then departed with their dogs.

Upon reaching the hunting grounds, they let loose the dogs that ran barking and chasing the wild animals, among them wild pigs. When the brothers noticed that the dogs were chasing their quarry towards Kabunyan, where Liddum, a god of the Ifugao resides, they decided to follow closely fearing that they might lose them.

Tracking the footprints of their dogs and quarry, the brothers entered Kabunyan. The quarry, a wild pig, went straight to a bamboo grove in the backyard of Liddum. The brothers took aim with their spears and hit the wild pig. The whimper of the dying pig prompted Liddum and his people to come around and investigate. When Liddum saw the slaughtered animal, he confronted the brothers and accused them of killing his people’s pig.

Liddum, being the god who blessed them with many animals, knew that to be true and he accepted Wigan’s explanation and made peace with the brothers.

Wigan explained further that most people of Kiyangan hunt these wild pigs for their food.

Wigan decided to show them how good cooked food tastes. He quickly brought out his flint with a special stone and produced fire from it. He cooked the meat of the wild pig and some rice, which he had asked from Liddum, in bamboo tubes.

When the meat and the rice were cooked, the brothers invited Liddum and his people to eat with them. The Kabunyan people found the aroma of the cooked food very appetizing. They also found out that cooked rice was so filling that a small portion is enough to make them feel full and satisfied. They were really amazed.

Because of the good taste of the cooked food, Liddum wanted to have their fire. He offered them some of his pigs, chickens, gold, and other possessions in exchange for the fire. But the brothers refused all of it saying that they had plenty of those things in their home in Kayang. What they actually wanted was Liddum’s aromatic large grain rice variety that they found to be more filling and satisfying compared with their rice in Kayang.

So Wigan asked Liddum if he would trade his aromatic large-grain rice for their fire. Liddum was delighted by the offer because the fire meant so much to him and his people.

“That was a smart idea,” Liddum said to Wigan, “It is true that you have plenty of rice in Kayang but it is the upland rice with no ritual and thus it does not last long. Your big granaries are filled with your harvest but they would only last for two months unlike our Skyworld rice that would last a whole year.”

Liddum, god of the Skyworld and the god of plenty, traded his aromatic large-grain rice variety to Wigan of Kiyangan for fire. But before Liddum handed them two bundles of the Skyworld rice, he first taught them the rice rituals and earnestly told them that it is important to perform these rituals starting from the sowing of the rice seeds up to the postharvest.

“By observing the rituals properly and religiously this rice variety with its aroma and good taste will be free from rice pests and diseases,” Liddum said. “And there will be a good harvest that will last the whole year round.”

Wigan and Kabigat thanked Liddum and promised him that they would perform the rice rituals in caring for the Skyworld rice.

Before the brothers went home, they taught the Kabunyan people how to produce fire and how to cook food using the fire. To show his gratitude for the generosity of Liddum, Wigan built a fireplace and cooking place for Liddum.

Then the brothers went home feeling good and proud. They had not only brought home wild pig meat but also a wonderful rice plant.

VISITING HEIRLOOM demonstration plots at the International Rice Research Institute during Farmers’ Day on 1 October, Ms. Dulnuan-Habbiling spotted one of the glutinous Tinawon varieties that she grows in her fields–a descendant of Liddum’s Skyworld rice no doubt. (Photo: Gene Hettel)

The brothers planted the Skyworld rice in their field in Kayang, propagated it, and shared the seeds with other Ifugao people. As the people tasted it and experienced its satisfying effect, many built rice fields across the mountain slopes and wherever else possible just to plant the Skyworld rice plant. Until now, this is the only rice variety that the Ifugao planted in their rice fields.

Because the Ifugao people believe that it came from Liddum of Kabunyan, they sometimes call it the Skyworld rice. Today, it is commonly known as Tinawon rice, which means “planted only once a year.”

Ms. Dulnuan-Habbiling is the matriarch of an Ifugao farming family. There are different local fables of how Tinawon rice came to be. Excerpts from this version are the closest to her beliefs. See the full story.