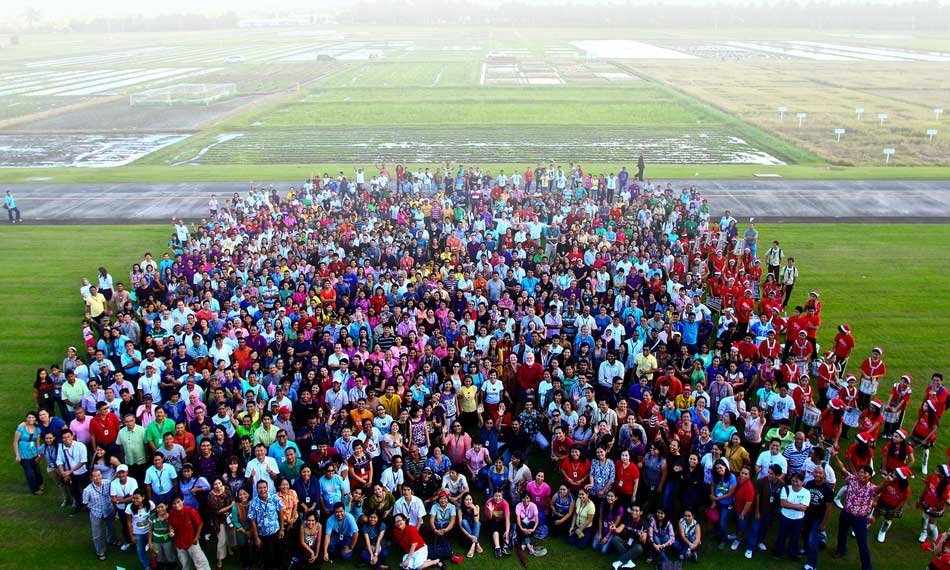 World Food Prize laureates Hank Beachell, Gurdev Khush, Yuan Long Ping, and Monty Jones have made their marks in staving off hunger by increasing rice productivity worldwide. But, even with their milestone achievements of developing high-yielding semidwarf rice varieties and hybrid rice, the challenge of defeating hunger continues. Only now, it is an even tighter race against time to increase rice production.

By 2035, when the planet’s human population is expected to surpass 8.5 billion, the world will require more than 100 million tons of additional rice. It takes around 10 years to breed a new rice variety, meaning that 2035 is just two conventional breeding cycles away—not much time from a breeder’s perspective.

With such a daunting challenge, we cannot count on just a few heroic rice scientists to save the day; we need what I would call a legion of heroic scientists—all working together like the IRRI staff members in the photo above!

In November, the 7th International Rice Genetics Symposium in Manila, Philippines, will gather many of the world’s best rice researchers, experts, and representatives from the public and private sector to share their knowledge and experience on advancements in rice genetics, a cadre of current and future heroes!

So, Rice Today is focusing on rice genetics and how it is helping fast-track the development of improved varieties (see Rice genetics gets personal).

Thanks to modern breeding using our understanding of genetics, Golden Rice has been developed. It contains a source of vitamin A and has the potential to help reduce the devastating effects of vitamin A deficiency, especially among poor rice consumers. To help clear up misconceptions about Golden Rice, Dr. Michael Purugganan, an authority on plant evolutionary and ecological genomics, confronts some misconceptions in Debunking Golden Rice myths: a geneticist’s perspective.

We also focus on what some of our modern-day rice heroes are working on. A team of plant breeders and pathologists continues to work together to improve resistance against bacterial blight disease (see Beating blight). Green Super Rice, a type of rice that thrives under less than perfect conditions, is now making its way to farmers’ fields. This has been made possible because of new breeding tools and the excellent collaboration of IRRI scientists and their partners (see Breeding for tough times ahead).

Elsewhere, in Africa, the Cameroon government has deployed strategies and policy measures to increase its rice production and make it more competitive in the market. See Cameroon: Central Africa’s potential rice granary.

Want to know some more about farm mechanization and its progress? A feature on the Not-so-silent revolution has a historical perspective on small machines in postwar Vietnam while Laser-guided dreams is a story about how laser-leveling is changing lives in Vietnam today.

We also get up close and personal with two scientists, worlds apart but with a common passion, who ended up being more than laboratory partners in For the love of rice.

In Breaking the barriers: from housewives to breadwinners, IRRI economist Sam Mohanty tells the tales of three Indian women who have risen above cultural stereotypes and are helping other village women improve their economic conditions.

Will rice production in India or throughout South Asia see a brighter scenario in 2035-40? Mapping the crop of the future offers a glimpse into the yield gains of C4 rice in the region through simulation models.

I hope you enjoy these and other features and appreciate the efforts and contributions of the “heroes” who have been working toward finding solutions to the challenges of feeding the world.