The Green Super Rice project has made great progress in the past ten years using advances in rice functional genomic studies, which have identified hundreds of genes for green traits, including resistance to multiple diseases and insects, tolerance of environmental stresses, and higher nitrogen- and phosphorus-use efficiency, in addition to higher yield and quality. 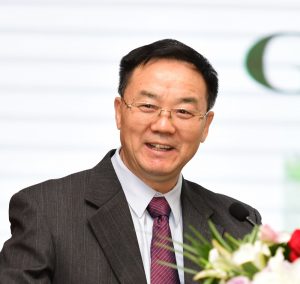 In the past half century, rice yields have undergone two major leaps because of the development and widespread adoption of semi-dwarf cultivars in the 1960s and hybrid varieties in the 1970s. These yield increases, however, have been accompanied by greatly intensified irrigation and application of fertilizer and pesticide, among other inputs, which have led to huge environmental problems.

In 2005, to reduce the environmental impact of rice production, we proposed developing Green Super Rice. This represents new rice varieties that have “green traits” such as requiring less pesticide, fertilizer, and irrigation water but also producing higher yield and grain quality. The Green Super Rice project has made great progress in the past ten years using advances in rice functional genomic studies, which have identified hundreds of genes for green traits, including resistance to multiple diseases and insects, tolerance of environmental stresses, and higher nitrogen- and phosphorus-use efficiency, in addition to higher yield and quality. The development and application of genomic breeding technologies have produced a large number of Green Super Rice varieties that have been widely cultivated in China and other countries.

Inspired by the success of Green Super Rice, we have also been advocating the idea of a resource-saving and environment-friendly agricultural system or “green agriculture.” The concept of green agriculture has also been progressing as the Chinese government has prioritized green development in recent years. In particular, China’s Ministry of Agriculture has reformed the crop varietal certification system to include “Green and Superior Quality” as a new category of varieties, providing a foundation for green agriculture.

At the same time, new models of rice-aquaculture systems, in which rice and crawfish, fish, or other aquatic animals are co-cultivated, have emerged over the past several years in China. In addition to greatly increasing the income of farmers, the coexistence of the two bio-systems provides many beneficial interactions that collectively reduce the needs for pesticide, fertilizer, aquaculture medicine, and feed. Thus, the system produces two green products: rice and aquatic animals. Moreover, the co-cultivation of rice and aquatic animals provides the benefit of cleaning the water. We dubbed this system Shuangshui Shuanglü, which means two aquatic products leading to double green. This system demonstrates a sustainable model that simultaneously increases productivity and improves environmental quality—an excellent example of green agriculture. This practice requires a rapid response of genomic breeding to meet this industry’s urgent need for rice varieties that are suitable for such systems.

With the rapid socioeconomic development in many new economies, especially China, rice production is undergoing fundamental changes in two major ways: (1) the size of production units from individual farmers to cooperatives, which has been greatly increasing the efficiency of production; and (2) the gradual shifting of demand from quantity to quality and food safety.

Rice research should address these challenges and opportunities emerging from such transformation to better feed the world.
__________
Dr. Qifa is a professor at Huazhong Agricultural University in Wuhan, China, and a keynote speaker at IRC2018.