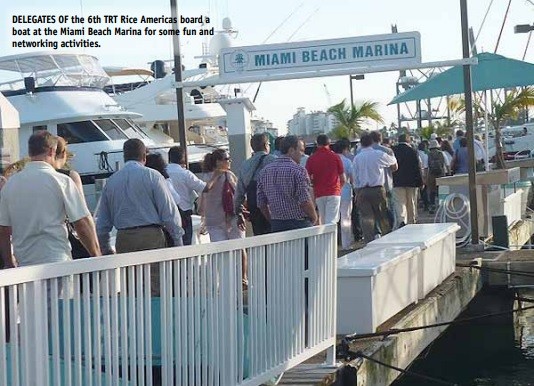 Delegates of the 6th TRT Rice Americas board a boat at the Miami Beach Marina for some fun and networking activities. (Photo: The Rice Trader)

In the Americas, farmers are expected to continue to move away from rice because of better returns in soy, wheat, and maize, but the Indian monsoon and Thailand’s record stocks are set to shape the trends in global rice trade.
Ever since Thailand supported its farmers through a mortgage program and India started exporting its surplus nonbasmati rice again, much has changed in the global rice trade. Any market development in the future may rely strongly on this. Other key issues also came into focus during the 6th Rice Americas conference of The Rice Trader (TRT) in Miami.

An important theme in the event was the falling rice output in key export regions, such as the United States and MERCOSUR (the Southern Cone Common Market, which pertains to Argentina, Brazil, Paraguay, and Uruguay in this report).

When TRT CEO Jeremy Zwinger kicked off the proceedings, he looked not just at the underperforming U.S. and South American crop but also at what the global economy was facing: economic crises, risks, and volatility.

A confusing storm
Mr. Zwinger tackled long-term market drivers, which he compared to a “confusing storm.” These are the growing population and the longterm trend of the U.S. dollar, which recovered during the euro-zone debt crisis. He said that, despite the weak global economy, rising oil and energy prices in the long term were also vital ingredients in the cost of rice production.

Mr. Zwinger also described global rice stocks as recovering but with some risks, considering that these current stocks were 22% lower than those 10 years ago. Fellow panelists Jaime Clendenin, head of the Rice Desk, Bunge, and Ramiro Velásquez, CEO of Global Commodities Inc., agreed with this idea and added that more risk and volatility can be expected.

The panel also agreed that the rice market looks susceptible to sharp movements largely due to the tight supply in the Americas. Mr. Velásquez suggested that low supplies in North, South, and Central America could see more Asian rice coming their way, especially if importers from the Americas reject higher prices from the U.S. and if South American exports are lower.

Weather watch
The Indian monsoon plays a key role in shaping Asian exports that dominate current markets; hence, it is important to keep an eye on the weather.

This September, the current La Niña cycle may switch to El Niño, according to Dr. S. Elwynn Taylor, agronomist and extension climatologist at Iowa State University.

This switch could affect large rice-producing regions across Southeast Asia and even Australia. Consequently, El Niño’s higher temperatures and lower precipitation could lead to a poor monsoon. Dr. Taylor mentioned a 70% chance of a poor Indian monsoon. He stated, however, that this 70% chance was possible only if La Niña directly became El Niño. 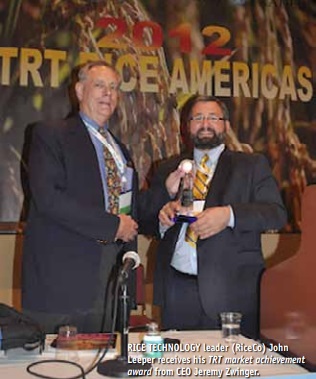 Health of the economy
Another interesting topic in the event was the current and future world economy.

Mike Dwyer, director of global policy analysis of the Foreign Agricultural Service at the U.S. Department of Agriculture, presented key economic points (see 8 driving forces in global agriculture). He said that, in 10 years, agricultural commodity prices will remain high and this will boost long-term farm profitability and invite more investments in research and production.

Notably, today’s euro-zone debt crisis has an important role in the way it has tempered the fall of the dollar and global demand. Hence, agricultural prices are lower. Indeed, the health of the global economy significantly affects prices and future trends in agriculture. 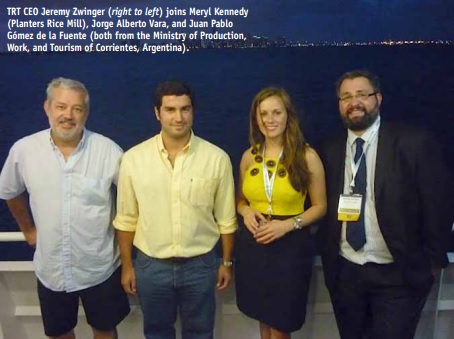 As the conference closed, the Brazilian real was beginning to show some early signs of weakness. This fired more discussions on how Uruguay’s, Argentina’s, and Paraguay’s exports to Brazil might be affected by a weaker currency. As the last speaker in the conference, I talked about the role of the biggest players in global rice trade while zooming in on Asian markets.

First, India. India’s long-term role in exports is expected to have an impact on price trends. With the Indian rupee looking especially weak, Indian rice may cost less in dollars—much lower than it already is, thereby taking away the market share of other export origins.

Then, Thailand. How will the country dispose of its record stocks? This is a million-dollar question. Thailand’s decision on some 15 million tons of rice stocks poses challenges to the global market. African buyers have already been turning to cheaper Indian offers, as India’s return to nonbasmati rice exports has, for now, helped ease concerns over how the Thai rice policy will shape market prices in 2012.

All in all, Thailand and India are the major influences on global rice market sentiment and trends.