Science-based improvements in agricultural technology have contributed significantly—across two Green Revolutions—to alleviating hunger and poverty in most of Asia. For example, the first Green Revolution that started in the 1960s—what I call GR1.0—converted India from a basket case to a breadbasket. The science of GR1.0 basically built a high-yielding semidwarf rice and wheat plant architecture adapted to low-stress environments, which benefited mostly farmers in favorable irrigated areas. 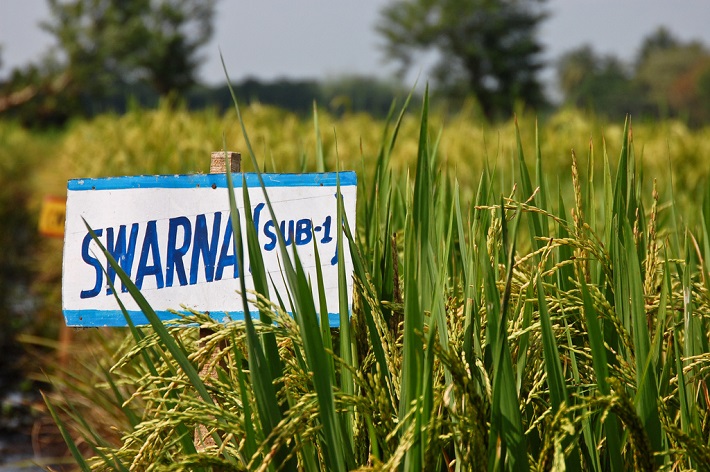 Swarna-Sub1 has the gene discovered and deployed by IRRI and partner scientists that enables the plant to survive complete submergence. The variety has spread like wildfire in eastern India and in other regions where flooding is a perennial problem. (Photo: IRRI)

Science-based improvements in agricultural technology have contributed significantly—across two Green Revolutions—to alleviating hunger and poverty in most of Asia. For example, the first Green Revolution that started in the 1960s—what I call GR1.0—converted India from a basket case to a breadbasket. The science of GR1.0 basically built a high-yielding semidwarf rice and wheat plant architecture adapted to low-stress environments, which benefited mostly farmers in favorable irrigated areas.

The science of the second Green Revolution (GR2.0) has gone one better on GR1.0 by “leaving no farmer behind,” especially those poor rice farmers growing their crop in marginal environments (see Green Revolutions 2.0 & 3.0: no farmer left behind). I maintain that GR2.0 in rice started in 2008, when farmers began adopting one of this revolution’s first new technologies, flood-tolerant rice, which can withstand total submergence for more than 2 weeks! Since then, these Sub1 varieties (such as Swarna-Sub1 in the photo above)—the gene discovered and deployed by IRRI and partner scientists that enables the plant to survive complete submergence is named SUB1—have spread like wildfire in eastern India and in other regions where flooding is a perennial problem.

The Sub1 technology can be attributed primarily to high-level and top-quality science—science conducted in some of the finest laboratories in the world and published in top scientific journals (such as Nature)—to solve the problems farmers face in their fields. One scientific study reported that India’s scheduled castes—among the nation’s most underprivileged—are likely to be a major beneficiary of the spread of the flood-tolerant rice varieties. If this is not a scientific revolution helping to transform society, I don’t know what is.

I also envision that, sometime around 2030, a third Green Revolution (GR3.0) will commence when farmers start planting yield-plateau-busting C4 rice (see Mapping the crop of the future) and nitrogen-fixing rice. These varieties will be extraordinarily environmentally friendly as, to produce higher yield, they will need only half the amount of water and nitrogen that is currently used. By this time, as well, consumers should have been benefiting for years from more nutritious rice with higher quality, fortified with iron, zinc, and pro-vitamin A, in the marketplace. However, I fear that this vision could be delayed or thwarted altogether.

The anti-science, anti-technology, and anti-GMO movements, which are hindering the use of transgenic crops, such as Bt brinjal (eggplant) in India and pro-vitamin A-fortified Golden Rice in a number of Asian countries, are having a chilling effect on our students. Some brilliant students are wondering whether they should devote any time at all to studying agriculture and biology. Maybe it is not worth the effort if they are unable to fully apply their ingenuity to the tools that they learned in school. This is indeed troubling because the future of agricultural science, in general, and rice science, specifically, is at stake if we cannot nurture the next crop of vibrant, intelligent, and caring young scientists. We want these people to be attracted to agriculture and to work on something that contributes to food security, sustainability, and improving our environment.

In addition to giving students second thoughts about what to study, the anti-GMO movement is obstructing the delivery of much-needed products. For example, India is home to the world’s largest population of vitamin A-deficient people, most of whom are children and pregnant women, many of whom are dying or going blind without the vitamin in their diet. So, it is an incredible act of negligence to keep Golden Rice from a needy and deserving population just because the anti-science clique doesn’t like it. I was shaken to the core about 2 years ago when opponents in the Philippines—where approval to distribute Golden Rice seeds to farmers has been led by the Philippine Rice Research Institute and monitored by Philippine regulatory bodies—ripped up experimental plots of the crop. What were they trying to accomplish? I suspect that they willfully destroyed the very experiments that would have proven that Golden Rice was a safe and effective food!

It is disappointing that the approval of Bt brinjal has been delayed in India. When one considers the large amount of pesticides applied to brinjal in the country, the release of the Bt version of the crop would bring tremendous environmental benefits by greatly reducing excessive and broadly toxic pesticide applications that indiscriminately kill organisms and harm the environment. However, anti-GMO activists again continue to block release because they think GM is evil in and of itself. They try to balance hypothetical, even fantastical, risks of a technology against known, demonstrated, and massive positive benefits. And, they confound arguments around science and technologies with selected multinationals they choose to demonize.

Although still on hold in India, Bt brinjal has been released in Bangladesh. Interestingly, Bangladesh approved Bt brinjal based on the data generated in India, which illustrates a concept that I would like to promote further. Many countries already have rigorous approval processes for genetically engineered products, crops, and food, among other things. Countries in South Asia, for example, could mutually recognize those approval processes as much as they recognize the food standards in the Codex Alimentarius rather than insisting that each test be repeated locally. This would be a responsible way to accelerate the adoption of high science and biotechnology—including crop varieties.

Bangladesh’s release of Bt brinjal is one excellent example. Perhaps an even better proof of concept is when, in October 2014, the secretaries of agriculture of India, Bangladesh, and Nepal and I, representing IRRI, signed an agreement to fast-track the release of any rice variety undergoing proper evaluation protocols in any one of their countries (see Regional cooperation speeds up the release of rice varieties). Acting rapidly on this revolutionary and courageous agreement, India has already directly released four rice varieties from Bangladesh and two from Nepal for Indian farmers growing rice in similar agroecosystems. This historic agreement will not only fast-track varietal releases but will also bring huge savings of time and resources to the three countries.

Just think of what could be achieved if other countries decided to go the same way and put into place, as a matter of routine, accepting a neighbor’s already thorough approval processes and protocols as one of the pillars of their own policies and regulatory frameworks—and then truly act on it! We really don’t have time to keep re-inventing the wheel. The world’s poor are depending on us, scientists and policymakers alike, to work together to get the results of high science to those who can use them—rapidly and efficiently. If we don’t, shame on us!

And, at the same time, GMO opponents and anti-technology lobbyists need to change their ways and learn to embrace science, not fear it!

Dr. Zeigler is the director general of the International Rice Research Institute. Excerpted from an op-ed article that appeared in The Economic Times, India.