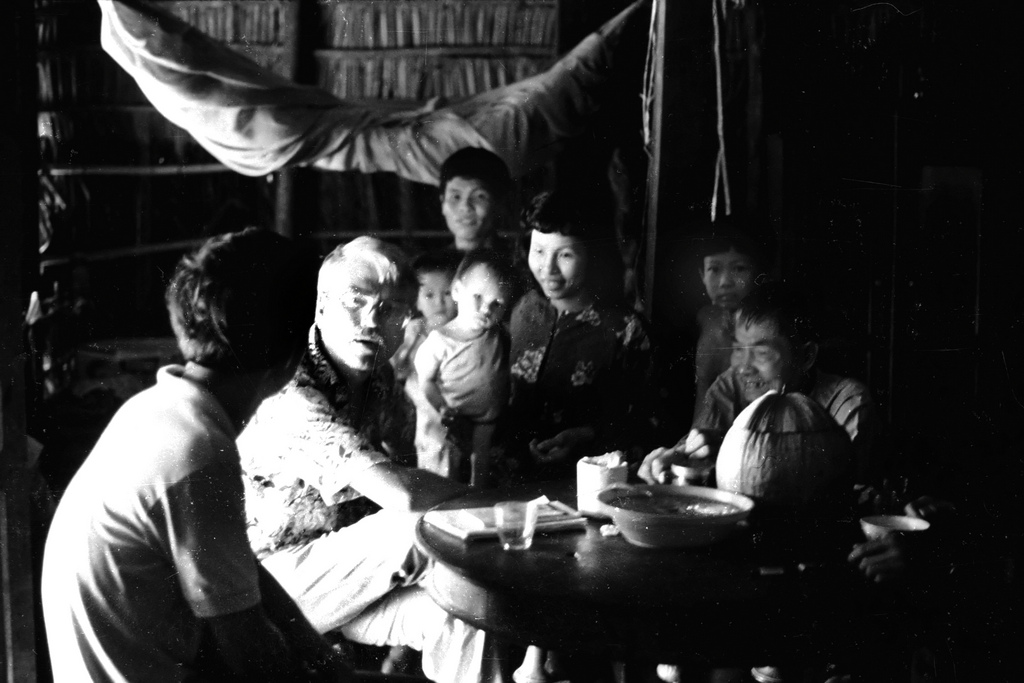 The author (left) with former Viet Cong political officer Tran Van Rang on the Xa No Canal in the lower Mekong Delta in 1988. Rang has just explained why he didn’t have me killed 18 years previously when he’d had the chance. (Photo: Vo-Tong Xuan)

The Green Revolution in rice has been documented throughout much of Asia, but few think of Vietnam in the 1960s and ‘70s as a “Green Revolution country.” That’s because IR8 arrived at the height of a brutal war that overshadowed an agricultural transformation in the countryside. Rice means life itself in Vietnam, and was used both as a weapon and as a tool for peace. I have strong memories of the war: Huey choppers, mortars, ambushes, and needless deaths. But I also remember Honda Rice. Tom Hargrove, August 2006

I’m stunned. I struggle for the right words, then simply ask, “Why didn’t you kill me, Tu Rang?”

“Because you brought the new rice seeds, and our farmers needed them.”

“Of course. Your civilian clothes didn’t fool anyone.”

The former Viet Cong—literally, Vietnam Communist, the common name for the National Liberation Front—and I look into each other’s faces, something we never did in 1969-70. He’s smiling, but he’s hard—it shows. He’s also telling the truth. I can sense it.

“I was less than a kilometer away whenever you traveled this canal in 1969,” Tran Van Rang says. Today, Tu Rang is vice-chairman of the Vi Thanh People’s Committee. But, two decades ago, he was the local Viet Cong political officer. I know that political officers held ultimate power in the Communist infrastructure—they gave orders to military commanders.

“You were entering my territory when you came here,” Tu Rang continues. “The local farmers all supported the Revolutionary Forces, and reported on you. “But I didn’t have you killed because of the new rice seeds.”

This trip is getting heavy, I think, as our sampan cuts north through the muddy waters of the Xa No Canal. New rice seeds. To me, they’re one of the world’s most powerful tools for peace. That’s why I made the Green Revolution my profession. 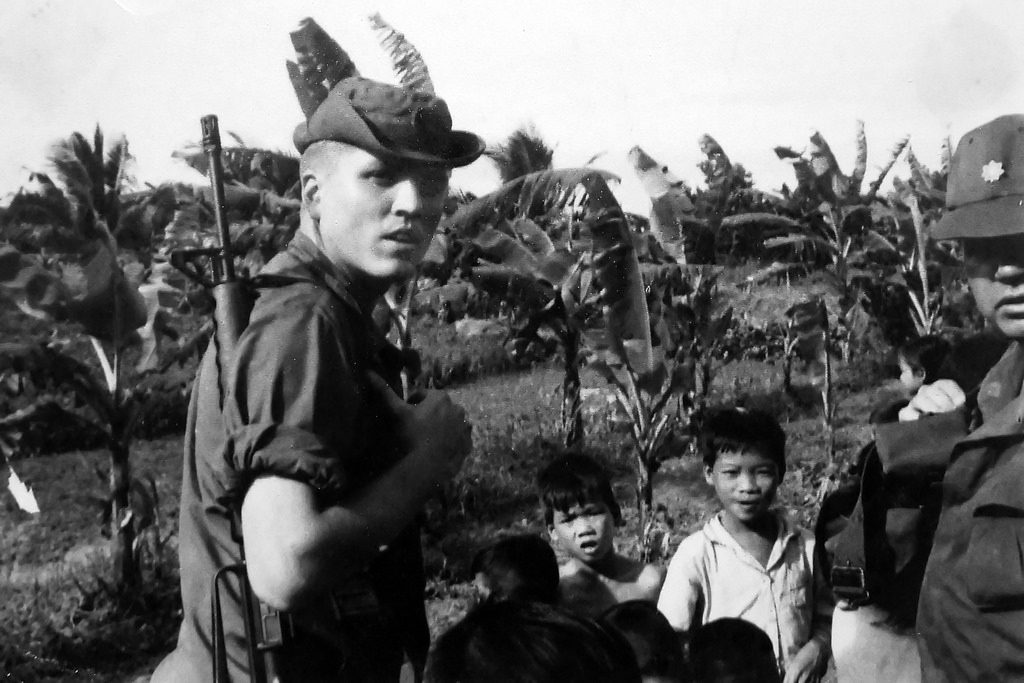 The author in the countryside deep in the Mekong Delta in 1969. (Photo: Hargrove Personal Archives)

But I learned about those seeds—especially IR8 or Honda Rice—here, in the midst of carnage. Had there been no war, rice wouldn’t have become such a part of my life. Now I must face a new reality: those rice seeds probably saved my life.

The lower Mekong Delta is peaceful and beautiful now. But I remember it as ugly, dangerous, and one of the most tragic places on Earth. To me, this is still 1969-70. We’ve just passed Duc  Long. I remember friends being killed in an ambush north of this village … in a sampan that I was supposed to have taken. Tu Rang must have ordered that ambush. I know I’m safe now, but I’ve  never traveled this canal without an M-16 and bandolier of ammunition.

“Has any other American been here since the war?” I ask Dr. Vo-Tong Xuan, my host and  vice-president of the University of Can Tho. Xuan, who is now the rector of Angiang University, in the Mekong Delta, had worked as a research fellow at the International Rice Research Institute (IRRI), where I’d worked since 1973.

“No, you’re the first foreigner— of any nationality—to be in the lower Ca Mau Peninsula since the war ended in 1975.”

I can do it only because I work with rice.

Vietnam veterans and historians have recently queried me about the origin and history of the  term Honda Rice in the war. Interesting, considering that the war ended 31 years ago. Or did it? Wars never really go away, for those who lived them. War and rice. Anyone who wants to  understand the war should  know the role that rice played. I learned about rice as a young U.S. Army officer deep in Vietnam’s heavily contested Mekong Delta at the height of the war, in 1969-70.

IRRI released the semidwarf IR8 to farmers in late 1966. Within a couple of years, it was the most widely grown rice variety ever known. IR8 launched the Green Revolution in Asian rice (see Breeding history.)

The Western press called IR8  the miracle rice. Its official name in Vietnam was Lua Than Nong, or “Rice of the Farming God.” But Vietnamese farmers quickly dubbed IR8 Lua Honda—or Honda Rice—because one good crop bought a new motorbike.