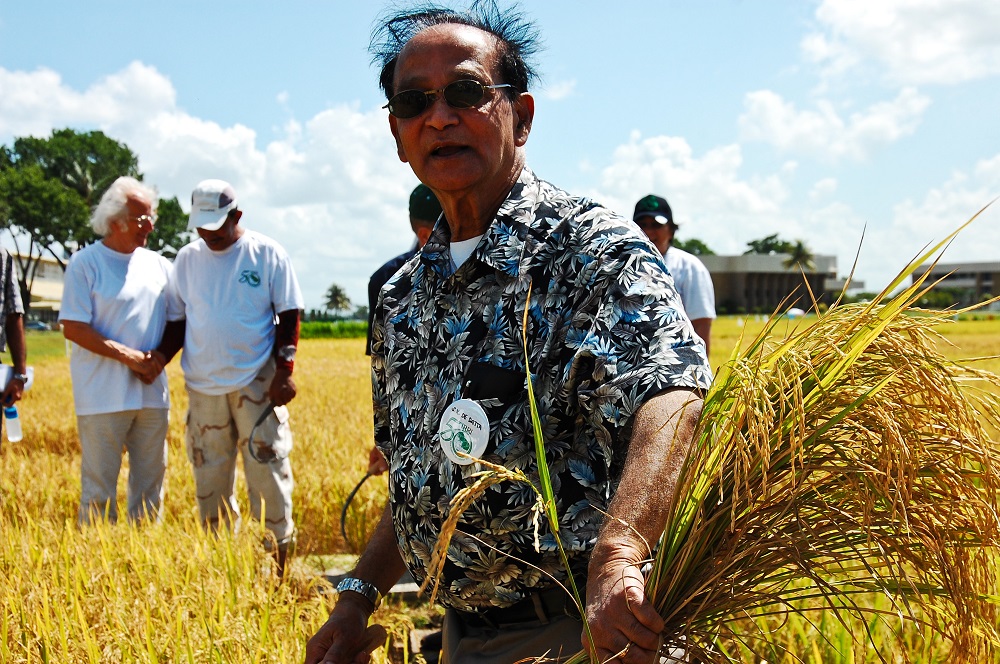 A former agronomist at the International Rice Research Institute (IRRI) looks back at his long and productive career. (Photos by Isagani Serrano, IRRI)

In my 47-year international career (27 years at IRRI and 20 years at Virginia Tech), I must say that my time at IRRI as an agronomist from January 1964 to June 1992 (becoming head of agronomy in 1970), represented the best years of my life and the most rewarding scientific and professional career.

I joined IRRI as an associate agronomist on 13 January 1964 as a fresh PhD graduate from the University of Hawaii with about a year and a half of experience as a postdoctoral scientist at the Ohio State University in Columbus. IRRI was then a new research institute supported by the Ford and Rockefeller Foundations when it was established in 1960. IRRI was small but vibrant and its scientists full of enthusiasm. It had a simple administrative structure with a director and an associate director and was staffed with mostly young, well-trained scientists recruited internationally. The supporting staff was locally recruited.

Each scientist developed his or her own research agenda in a disciplinary-based department following the overall mission of the institute to develop science-based knowledge and technology to enhance rice production in the developing world and ensure and sustain global food security, particularly in Asia. Each department had a budget and staff. The department head was responsible for the management of the resources, personnel, and programs. Each department and scientist grew professionally based on his/her performance and progress made toward IRRI’s mission.

Miracle rice
One of my most notable experiments was the comparison of plant types on the growth characteristics and yield performance of promising IRRI breeding lines tested with the best semidwarf rice variety—Taichung (Native) 1—and several tall traditional varieties such as Peta, Tjeremas, Bengawan, and Binato.

In the dry season of 1966, our research identified the record-yielding breeding line IR8-288-3. It was an amazing breakthrough in technology development for higher rice production in the tropics. Accompanied by Dr. Hank Beachell, IRRI rice breeder, I showed my research results to IRRI Director Robert Chandler in his office. He was excited and immediately congratulated us.

“S.K. and Hank, you both have made history,” Dr. Chandler said.

When Philippine President Ferdinand Marcos found out about this, he flew to IRRI by helicopter.

IRRI’s Associate Director A. Colin McClung (Dr. Chandler was out of town) alerted me to the president’s visit and asked me to prepare a display of my results with breeding line IR8-288-3 (or IR8). When I showed President Marcos the yield curves of the different varieties, he asked me some pointed questions as the results looked simply spectacular but so unreal to him.

“No kidding, Dr. De Datta!” he exclaimed with a grin. “You mean to say this short IR8 rice has outyielded all of these tall and vigorous varieties?”

“Why would I be kidding, your Excellency?” I answered politely. “My results, as you can see, speak for themselves. IR8 produced 9.4 tons per hectare grain yield while the other varieties yielded only 5 tons per hectare.”

At that time, the national average yield of rice in the Philippines and in many tropical Asian countries was 1 ton per hectare. Many countries in tropical Asia were deficient in rice production relative to the country’s need. President Marcos congratulated me and also asked the IRRI director for seeds for the rapid multiplication of IR8 in the Philippines.

Subsequently, convinced by my results, President Marcos then announced to the nation his commitment for the Philippines to become self-sufficient in rice in a few years, which he fulfilled. That also ushered in the “Green Revolution in rice,” which started in the Philippines and spread rapidly throughout Asia.

My research results on IR8 were published fully in Agronomy Journal in the U.S. in 1968. In 2006, Tom Hargrove, former head of the Communication and Publications Department at IRRI, and Dr. Ronnie Coffman, a former IRRI plant breeder and now at Cornell University, wrote a detailed article about the history of IR8 that included my research results (see Breeding History).

You got something there, S.K.
One time, Norman Borlaug, the distinguished Nobel-prize-winning (1970) wheat breeder from the International Maize and Wheat Improvement Center (CIMMYT), was visiting IRRI.

I told him that we had developed a screening technique for drought tolerance in rice using a line-source sprinkler irrigation system.

“Don’t be ridiculous,” he said. “There is no such thing as drought tolerance in rice. It is an aquatic plant.”

I invited him to see for himself the field site on the IRRI farm where this drought-screening process was taking place. When he saw my screening site in the field, he was convinced that indeed distinct varietal differences existed in drought tolerance in rice.

What a thrill it was to show my research findings on drought tolerance in rice to Dr. Borlaug and receive such a comment from him. 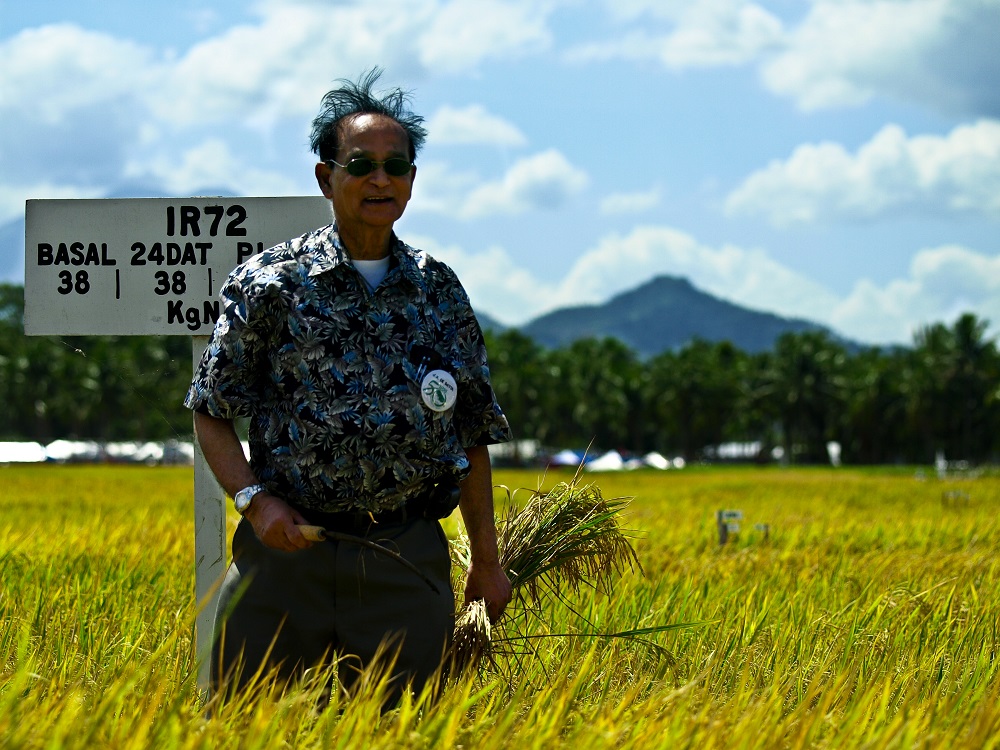 A five-dollar challenge
Despite some hesitation from Director Chandler, I was allowed to do research on another rice technology that I perceived would become critical in rice production systems in the future. I was proud to develop and disseminate a package of knowledge that advocated direct-seeded rice technology for tropical Asia as an alternative to transplanted rice.

Former chairman of the IRRI Board of Trustees, Wally Falcon, a distinguished economist and director of the Food Institute of Stanford University in the U.S., and I had some exciting discussions about direct seeding.

“I will bet you five dollars that direct seeding of rice will never find a place in Asia,” he said.

Over the years since that encounter with Dr. Falcon, direct-seeded rice has become an important rice culture in the Asian tropics. I still have to collect my winnings from Dr. Falcon!

This is why IRRI is a unique institution. It allows scientists to conduct research on futuristic production problems.

Working with national programs
At IRRI, I had the privilege to work collaboratively with many national programs, particularly in the Philippines, IRRI’s host country. I felt deeply gratified to be requested by IRRI Director General M.S. Swaminathan to write a position paper that made recommendations for the establishment of the Philippine Rice Research Institute (PhilRice) in Nueva Ecija. Then-Secretary of Agriculture Carlos Dominguez moved forward with those recommendations and he obtained Congressional approval to establish PhilRice in 1985. Santiago Obien, the founder and executive director of PhilRice, recognized my collaboration and contribution to Philippine agriculture.

The best place on Earth to work
These and others momentous occasions are my fond and proud moments at IRRI. This is why I always believed that IRRI is a great place and perhaps the best place on Earth to work. There are no limits to what a scientist and his or her team can achieve. IRRI has always had a clear mission. I and others were privileged to contribute to some of the goals and objectives of the institute.

In my time at IRRI, many eminent scientists from all over the world flocked to work in our laboratory. They came from the Commonwealth Scientific and Industrial Research Organisation in Australia, Justus Liebig University and the University of Hamburg in Germany, and Cornell University, the University of California, and several other American universities.

Visiting scientists spent time in our Agronomy Department at IRRI and enriched agronomy and soil science research to solve production problems in rice. I believed that the infusion of new ideas and techniques from distinguished scientists from developed countries was very important to our research and education programs at IRRI. We published our joint research with these eminent scientists in many top international scientific journals.

My involvement in the training of young scientists from all over the world was highly rewarding. Some of these graduates became national leaders in their respective countries. Some of my graduate students and postdoctoral scientists became vice chancellors of Indian universities (five of them), one became a chancellor at the University of the Philippines Los Baños, one became the minister of agriculture in Laos, and others served in the Asian Development Bank in the Philippines and the USAID mission in Senegal.

Achmad M. Fagi, one of my graduate students from Indonesia, did both his MS and PhD degrees with me. Dr. Fagi later became director of the Sukamandi Research Institute for Food Crops in Indonesia and served as a member of the IRRI Board of Trustees in the early 2000s.

On 26 May 2008, then IRRI Director General Robert Zeigler presented me with a plaque that recognized my “wide-ranging research in agronomy, soil science, and other aspects of rice production and, through the guidance of numerous students and young scientists, making major contributions to the Green Revolution that helped Asia gain food self-sufficiency and overcome widespread poverty in many regions.”

I cherish this recognition with all my esteem and love for the institute.

Totally blessed
I feel totally blessed to have worked at IRRI and contributed to its mission and goals. I never thought of it as my entitlement but a privilege I had to earn. I take this opportunity to express my deepest gratitude to all my IRRI colleagues, administrators, staff, students, and colleagues from national programs for their support during my very rewarding 27 years at IRRI.

I wish IRRI continued success for the good of the rice world. I believe the world needs IRRI to produce new knowledge and technology for rice, which is the most important food crop.

I express my gratitude to IRRI’s current leadership for giving me the opportunity to share my reflections on my time at the institute.

That was a great journey!