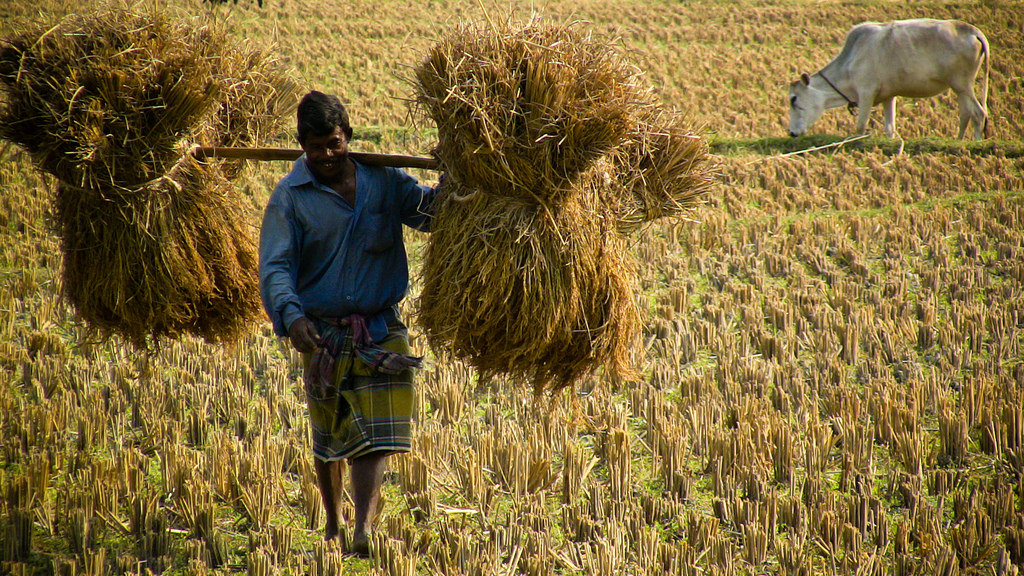 More than 90% of the world’s rice is grown and consumed in Asia, where it is a staple grain. (Photo: IRRI)

We all know what happened to the rice market in late 2007 and early 2008. Within 6 months, global rice prices rose by more than 300%, reaching the unprecedented figure of US$1,000 per ton. Soon afterward, prices retracted; but, unfortunately, they stabilized at a level much higher than before the crisis began in October 2007. For example, the price of 5% broken Thai rice has been hovering between $500 and $600 for the past year and a half compared with the low $300 range during the 2-year period prior to the crisis.

Higher world prices have also been reflected in the rise of domestic retail prices in major rice-consuming countries across Asia and Africa in the past 2 years. Rice retail prices in December 2009 across major retail markets in Asia, except the Hubei market in China, were around 40% higher than what they were before the crisis. The situation in Africa during the same 2-year period was even worse, as the retail price increased by 40–80% in most countries, except in Mogadishu, Somalia, where it exceeded 100%. Still, this has happened despite measures taken by countries around the world to insulate domestic markets from world market instability.

The case of South Asia
Major rice-consuming countries in South Asia such as India and Bangladesh had also taken measures at the onset of the global rice crisis to protect their domestic markets. Despite such measures, domestic rice retail prices in these two countries’ major markets have increased significantly since the beginning of the crisis.

In the case of India, high food price inflation in rice, sugar, and lentils has, in recent months, become a regular front-page news story in leading Indian newspapers. Rice prices in major retail markets have been rising steadily since the start of 2008 and current prices are more than 50% higher than 2 years ago.

In Bangladesh, rice prices rose and fell in late 2007 and 2008, following the trends in the global market, but prices have started to rise again in the last 6 months. According to an article in the 15 February 2010 issue of Star Business, a Bangladeshi newspaper, rice prices have increased by as much as 37% since the beginning of the current fiscal year (July 2009).

In order to assess first-hand how people in farming communities cope with rising rice prices, we conducted a short survey in parts of India and Bangladesh during our recent trip to South Asia in February 2010.

A snapshot of India
Our first stop was the district of Kushinagar in eastern Uttar Pradesh. We visited a few villages to conduct a focus group discussion and pretest our village survey questionnaire as part of the Cereal Systems Initiative for South Asia project funded by the Bill & Melinda Gates Foundation. We took this opportunity to interview various farmers, including marginal farmers and landless laborers, regarding the impacts of the rice price hike. The questionnaire was designed to investigate the various adjustments these categories of farmers have to make with regard to food consumption and expenditures, and on-farm and off-farm activities, in response to rising rice prices.

Our survey showed that most farmers are aware that rice prices have gone up in the last year, but only marginal and landless laborers with large families seem to have been affected by such price increases. Farmers who produce enough rice for their own consumption seem to have not been affected by the recent price rise. This includes farmers of all types whose own production is large enough to meet their year-round needs. In those villages, marginal and landless laborers, who fall below the poverty line, are also not affected by higher prices because rice and wheat were heavily subsidized by the Public Distribution System (PDS). Very few landless laborers with large families, who needed more than the monthly allotment of 35 kilograms of grains (rice and wheat) from the PDS, seem to have been affected by higher rice prices. All of those who said they buy rice from the market admitted that they have cut their other expenses, including the purchase of other food items, to maintain rice consumption.

Our next stop brought us to a village in Maharajgang District of Uttar Pradesh, located near the Nepal border. We also spoke to a group of farmers, which included a number of marginal and landless women laborers.

After this, we headed to the eastern coastal state of Orissa, and stopped at a progressive village named Nuapada in Jajpur District. The story was more or less the same as in the villages in eastern Uttar Pradesh. People with sufficient land to feed their own family are hardly affected by higher rice prices, whereas marginal and landless laborers with small families were protected by the PDS program. The real impact of the rice crisis was felt by landless laborers and marginal farmers, whose need extended beyond what was obtained from the PDS.

This story didn’t change much during our visit to a fishing village in Kendrapada District and to another village in Khurda District near the capital city of Bhubaneswar. The overall picture in India didn’t vary much as we moved across villages in these two states. The PDS is definitely acting as a buffer for the most vulnerable section of society against such price fluctuations.

A quick look at Bangladesh
On our next stop in neighboring Bangladesh, we visited a few villages in Kishoreganj District of Dhaka Division, situated in the northeastern region of the country. The situation in those villages appeared to be different from those in India. As indicated earlier, rice prices in the country have been rising in the last several months after staying relatively low for the first half of 2009. Like the farmers in India, Bangladeshi farmers who have enough resources to produce sufficient rice for their own consumption seem to have been unaffected by the crisis. But, small, marginal, and landless laborers have started to feel the pinch of rising rice prices. Some families obtain 5 kilograms of rice twice a month at 22 takas (US$0.32) per kilogram, but, for many, the price difference is too small and the quantity is not enough to meet their needs. Similar to their Indian counterpart, this group also overwhelmingly agreed that their rice consumption has not changed despite higher prices. However, coping mechanisms differ from person to person. Some work extra hours to earn additional income, while others try to reduce their expenses on other items, including highvalue food items such as meat and fish, to keep their rice consumption unchanged.

What have we learned?
Generally, a country is not insulated from the happenings in the global rice market. Interventions in the domestic and trade sectors may protect against short-term fluctuations in world prices but, eventually, the domestic market is influenced by global price changes. In the case of Bangladesh and India, domestic retail prices are higher than the prices 2 years ago despite several measures taken by their respective governments to keep prices low. For these two South Asian neighbors, rice continues to occupy a central place in the rural food basket. It is also worrisome that price rises have a direct impact on the most vulnerable in society—marginal farmers and landless laborers.

Government programs such as the PDS definitely play an important role in protecting the rural poor against price escalation, but they do not necessarily cushion everyone from the ill effects. These programs, though important from a national food security perspective, are significant burdens on government coffers and may not be effective if the system is not clean. The bottom line is that these programs may provide temporary relief against price escalation, but they are not a long-term solution. The long-term food security problem can be solved only by keeping rice affordable by expanding production primarily through yield improvements.

Mr. Pede is a scientist at IRRI’s Social Sciences Division and Ms. Zeigler currently works as an intern in the same ofﬁce.