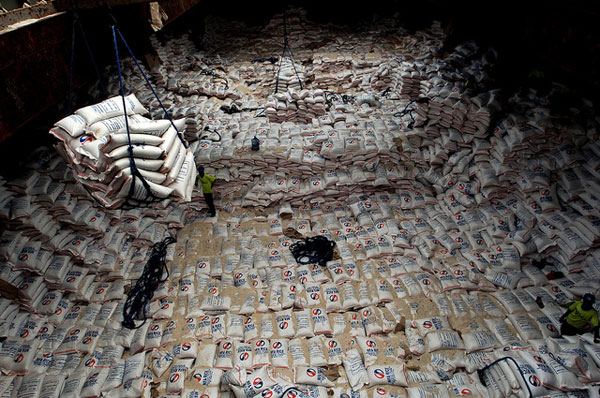 About 450 delegates gathered in Bali, Indonesia, in September 2012 to look at these issues and at what experts thought would shape global markets.

Important economic and political developments have been rocking India and Thailand, making them the major players in 2012. Deep concern for these countries arose because of India’s recent return to nonbasmati exports (and concerns over a late monsoon and impact on rice output) as well as Thailand’s rice mortgage scheme, which critics deemed more “populist” than economical. China, on the other hand, turned out to be a significant buyer in 2011-12, and a force that arrived when many importers such as the Philippines and Bangladesh were reducing, if not stopping, rice imports. IRRI senior economist Dr. Samarendu Mohanty pointed to rice consumption and the need for an additional 116 million tons of rice by 2035 to feed the global population as he took a long-term look at rice demand.

He also discussed how the U.S. drought, the Indian monsoon, and climate change in general caused swift changes in supply.

Extreme weather affected global grain production more in 2012 than the 2008 crisis. However, rice markets were less affected by this tide of price increases that arrived on the back of severe drought in North America (comparable to the drought of 1988- 89) compounded by food crop output limitations faced in Russia, the Black Sea region, South America, and Australia.

Dr. Mohanty said that the bigger concern in global supply and demand was coming from Thailand’s possible losses in export sales due to its uncompetitive prices.

Korbsook Iamsuri, president of the Rice Exporters Association of Thailand, revealed what many in the audience suspected: that Thailand could soon lose its prestigious position as the world’s largest exporter, most likely to India, or Vietnam.

Although the Thai mortgage scheme is not new, the global situation—particularly with India’s return— presented fresh challenges for Thailand. Quality problems (due to the degradation of stocks held over a long time) and the lack of price competitiveness were key worries.

With the competitive situation in mind, Ms. Iamsuri presented two possible scenarios: the current scheme, if left untouched, could leave Thailand in jeopardy; or, if the scheme is modified to allow a role for stakeholders and the Thai market to adjust and compete for specialty markets (such as parboiled rice), Thailand could retain a larger market share. Thailand could otherwise supply markets only if large supply shocks (associated with a swiftly changing weather system) affect rice markets.

Chef Michael Cross (right) stands undefeated as the Lord of Rice in 2012. He first won the recognition in 2011. (Photo: TRT)

India’s rice exports constantly depend on government or political decisions, such as the one in 2008 that saw three long years of a nonbasmati rice export ban, said Tejinder Narang, advisor to Emmsons International.

The reality was that India’s domestic economy, particularly food inflation concerns, tended to strongly affect the rice market through political decisions. Notably, Mr. Narang revealed that India’s Food Security Bill, which will subsidize food for 65% of the population, would be the deciding factor for the long-term viability of Indian exports.

India, in the meantime, is expected to continue exports for most of 2013.

Global issues such as rising demand and rising energy cost pushed the agency to adopt a multilateral approach to food security that will meet national objectives through rice reserves and price stability. This is evident in the agency’s local rice procurement that rose from just 1.9 million tons in 2010 to 3.41 million tons in 2012. The program supports 17.4 million households and must consider global developments while keeping an eye on national objectives.

Jeremy Zwinger, president and CEO of The Rice Trader, said, “What we have in 2012 is a global grain market that not only mirrors the crisis in 2008.” He said the market surpassed the 2008 record prices of corn (maize), wheat, and soy, while rice lagged behind the global grain market. North and South American markets saw a modest price reaction to tight supplies while Asia’s market has ample supplies, which are weighing down the price.

Mr. Zwinger added that 2012 was also different in that there was economic weakness seen in the Eurozone, U.S., and even the sturdy Chinese market to potentially temper demand and any speculative money from finding its way to rice markets.

Mr. Darren Cooper, senior economist of the International Grains Council, also reported on global grain market developments. He described the grain and oilseed markets as having “diverged from the global commodities complex” since June 2012.

Mr. Cooper also revealed that rice markets did not follow this high-price trend only because rice market fundamentals now do not support such a rising price. Although stocks were seen as ample, he asked, “How much of this supply is actually available to the market?”—revealing what could be an important element that affects price volatility and availability of rice.

Rice and the whims of climate

Elwynn Taylor, extension agronomist at Iowa State University, focused on climate change and its potential impact on global rice and agricultural production. He warned of the likelihood of El Niño and how temperature is on the rise, which could signal a risk of drought in several parts of Southeast Asia.

Mr. Taylor’s forecasts revealed a volatile outlook for rice production in 2013: although India’s production is expected to improve in 2013, global corn and rice supplies are likely to decrease, while wheat production is seen as stable.

China and other key players

In the midst of all these discussions, Hu Wenzhong, senior analyst at National Grain and Oilseeds Information Center in China, bared a rising trend in Chinese imports.

It made sense for China to take advantage of cheaper prices with some 1.64 million tons imported into China in the first 8 months of 2012. Ms. Wenzhong said that Thailand has ceased supplying China because Vietnam’s and Pakistan’s cheaper prices attracted the bulk of Chinese buying.

Thus, 2013 rice markets would be shaped, to some degree, by the following: Chinese and Indonesian buying, Thai decisions on the rice pledging scheme and mounting stocks, and India’s export policy and Food Security Bill.

All these policies and business decisions will also confront an increasingly volatile output as a result of increasing uncertainty in weather. The challenge for 2013 is complete with a stuttering global economy with worry lines seen in Europe, America, and China—to add a financial market dynamic to rice markets in both price and consumption trends.