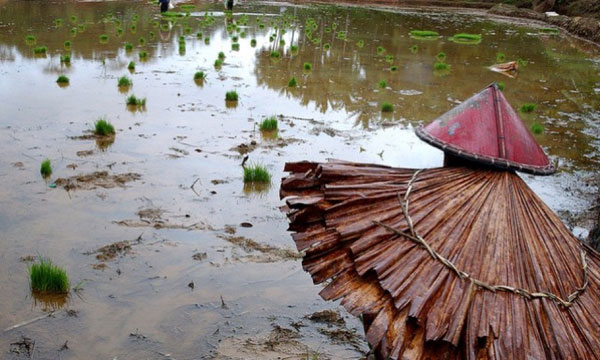 In the middle of the 19th century, rice was the economic backbone of Japanese society. Hierarchical ranks of feudal lords were determined by the amount of rice produced in their respective territories. Even the annual salary for samurai warriors and administrators was paid in rice.

However, since the introduction of the Western diet to Japan, particularly through the school lunch aid program from the United States after World War II, rice has no longer been the sole staple food. Modern life required a change from traditional dietary habits to a fast-food diet. In 2012, the National Statistics Bureau announced that purchases of bread by urban dwellers surpassed purchases of rice for the first time.

The staple food crops of different regions change from time to time. In Europe, potatoes arrived from the New World in the 16th century and changed the European diet. In Africa, corn (maize) and cassava are now major staples, although these crops were not native to the continent. Therefore, the rise and fall of crops totally depend on whether the crops are competitive in the market, and, ultimately, on demand by the population.

Rice is currently a popular crop in some regions of the world. The per capita consumption of rice in Africa and North America has increased by more than 25% in the last 20 years. The price of rice is nearly twice that of wheat depending on quality. And, rice has been invading the traditional market for coarse grains in Africa.

In Asia, however, rice is becoming an “inferior” good. The per capita consumption of rice decreases as income increases in many Asian countries. A decline in rice demand may also decrease rice farmers’ income and livelihoods in rice-producing areas. Globally speaking, this can be interpreted as a relative loss for rice-based economies in Asia, where the climate is highly suitable for rice production.

Thus, rice-producing areas should try to maintain or increase the value of rice, rice products, and its by-products—and eventually, the value of rice systems as a whole. The development of high-quality and high-value rice products is an important source of income that will bring prosperity. Unfortunately, neither companies nor governments are very keen on promoting the consumption of rice, unlike other agricultural products such as coffee, chocolate, and banana.

In Japan, various efforts beyond the supply of tasty and shining rice grains are being made. The country has already begun research on new rice-based products such as rice noodles, pasta, bread, cookies, liquors, animal feed, medicines, and fuels. Moreover, a rice-based diet is being promoted as a healthy alternative and as a way to prevent some diseases.

The importance of rice, however, is not limited to its economic and nutritional value. We must also recognize the value of rice production in a social system in the context of “externality,” which is a consequence of economic activities related to rice.

It is widely accepted that rice cultivation has environmental, cultural, social, and other functions. For example, paddy cultivation has sustained soil fertility for hundreds of years. This makes the value of its sustainability superb. Also, paddy fields often mitigate flood damage by storing water temporarily. Moreover, a collective practice for water management fosters the development of rural communities. Therefore, these intangible values, among many others, should be assessed and added to the total value of a rice production system. Now, tentative values have already been given to these various functions.

The rice community, consisting of producers, distributors, processors, researchers, and administrators, among others who benefit from rice, should have a common strategy to raise the relative value of rice and the rice sector in order to keep it as a major part of our life. It is wise to make efforts to “internalize,” meaning to bring to light the invisible values attached to a rice system. Perhaps these values are equally as meaningful as the efforts to raise the records of yield per hectare for major rice varieties.

This is not a “selfish idea” of a person who is fascinated by the beauty of rice fields and the taste of rice dishes, but it is an objective view based on a scientific assessment of the rice economy.

Dr. Koyama is the director of the Research and Strategy Office at the Japan International Research Center for Agricultural Sciences and member of the Rice Today editorial board.