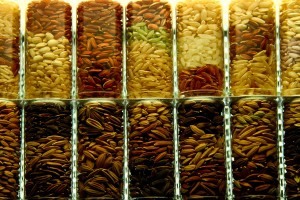 On the drawing board for rice improvement
The biggest change on the drawing board for rice improvement is probably genome editing. We have sequenced 3,000 rice genomes and will probably sequence another 10,000 in the next several years. For the available sequences, we have the phenotypes of those materials. We will have opened up the wild relatives of the entire genus Oryza, which will be available for analysis and manipulation. With the development of the CRISPR/Cas9 [clustered regularly interspaced short palindromic repeats/protein-9 nuclease] complex for gene editing, there is nothing that will prevent us from moving genes from within the genebank containing different Oryza sativa, domesticated rice, and wild relatives of Oryza species, to improve and to tailor rice varieties for all kinds of beneficial traits. That will be much easier than classical breeding, but it will have the same impact as classical breeding. They will not be GMOs or transgenic.

We have before us the ability to stitch together any ole kind of rice plant that we want. That’s going to be the reality 10 years from now. That’s going to completely transform the rice sector. Traits, which we [previously] spent decades identifying and working with, will bloom at our will. That, I think, is what will happen with rice. 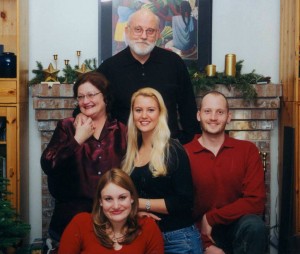 There is no way I could possibly have done what I did without Crissan’s support. Photo: Zeigler archives.

Crissan—the better half
Crissan [with Bob and daughters Clare (center) and Ali and son Nick] has always been an unbelievable supporter. We got married and moved to Seattle and then went down to Oregon State University. As I already mentioned, she worked with me in the field collecting data at Crater Lake National Park for my master’s degree. We moved off to [Cornell at] Ithaca and she worked there as a waitress while I was doing my graduate work. We had a baby [Nick] and we lived in a trailer park. She was always incredibly supportive of the work that I did. She was willing to go to Burundi. Oh, and when I went down to Cali [Colombia] to work on my PhD, we lived in a working-class neighborhood in Palmira; it was very difficult and challenging. We had no money, but survived. She went back to do a master’s degree on her own with our new baby at the University of Illinois. We moved to Burundi, had baby no. 2 [Clare] in a little mission hospital there, no light; baby born as I was holding a flashlight in my mouth by the light of the full moon. We went to Colombia to work at CIAT.

There is no way I could possibly have done what I did without Crissan’s support. She was a tremendous sounding board. I moved into administration, being an introvert, not very well suited to people management and leadership. When things went really dark, she was there and helped build me up, supported me, and provided the extroverted social aspect dimension of our family, which, in retrospect, was required to move along and to progress into what turned out to be a career path—although I never knew it was a career path.

She was always willing to play that role even though sometimes it meant subjugating her own personal interests and desires. It took a toll of course. She provided me with a perspective on some of the human aspects of science, administration, and management that I was woefully unaware of. She certainly provided dimensions of perspectives that I desperately needed. She bore a lot of frustration when things didn’t go as quickly as they should have here at IRRI for me as DG. She bore the brunt of a lot of that and, at some point, it also took a toll. She was genuinely interested in making sure that what we did worked.

We raised our children together. She’s, of course, given my travels, had much more of the responsibility of that than I did. I could not even begin being the kind of person I am without her and without what she has done and what she has sacrificed and what she has contributed. It sounds trite and like platitudes, but fundamentally, I would be very different and would have accomplished far less without the difference Crissan has made in me and in my life.

The reason why we’re settling in Oregon after IRRI is we went from Seattle to Corvallis in 1975 to do my master’s work, and we’ve been going back with our kids to Oregon virtually every year since. It’s the only home we have in the U.S. We did live 5 years in Manhattan, Kansas; those were the longest years in my wife’s life. 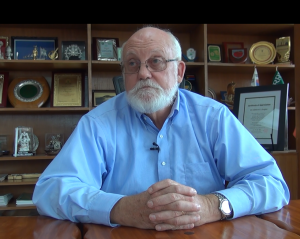 What happens at IRRI is relevant.

Being at the helm of IRRI—no other job like it
The IRRI experience is number 1 in my career—without a doubt. The job as IRRI Director General is unlike any other job you can ever possibly want. Science, its value in human terms, the impact you can have positively on the environment—you can transform the way the whole planet will function decades from now, a century from now. What happens at IRRI is relevant.

My God, you can’t ask for anything better or more humbling. If you work for IRRI, and you work hard, do your best, you will never have to worry about whether you’ve wasted your life. Every morning, when you look in the mirror, you won’t regret what is looking back at you. That’s worth a hell of a lot.

I have a rocking chair and will put a little blanket over my knees and just rock in front of the fire. But seriously, I’ll stay active. I like to think that some of my experience will be of use. I will spend some time supporting the objectives of the Asia Rice Foundation USA as its executive director. ARFUSA is a group of former mostly U.S.-based IRRI staff members who have all worked and lived in countries where rice is vital for food and earning a livelihood. I think it will be nice to help support IRRI and that will be one way to do it. I will stay away from IRRI. Matthew and IRRI management don’t need me nosing around and looking over people’s shoulders.

I would like to have the opportunity to bring some of my experience to smaller companies in the private sector if they’re interested in developing countries; perhaps bring some insights there. I would like to be professionally engaged about half the time. I’ve got a grandchild and will have several more, I’m sure, in the coming years. Then I’ll spend some time with them and be the doting archetype grandparent who spoils the grandchildren and generally makes life more difficult.