Greatest challenges as IRRI DG
Convincing donors to contribute. One strength is the unassailable nature of IRRI’s mission. Keeping in mind what IRRI was about, why we’re here, our track record, and our ability to contribute made dealing with the challenges much easier. There are the usual challenges—one, making sure that the money comes in. I still love explaining to donors how important rice is and what IRRI’s role is in the future of the world and what we have to contribute. 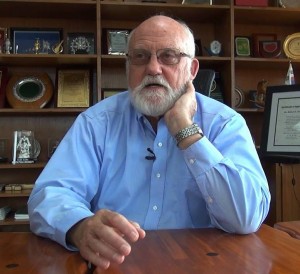 A real challenge: working and moving forward in the CGIAR environment.

CGIAR nightmare. The CGIAR brings out the worst in people. Some people you deal with one on one are really nice, serious, and dedicated. But, when you get them into the context of the CGIAR, they’re just horrible, myself included. I think I turned into the meanest SOB you’d never want to meet when I put on my CGIAR hat.

I never thought about it in those terms until right now. This morning, I had to write a message related to the CGIAR that I didn’t want to write. I just find myself, in many cases, having to deal with people who somehow survived in positions way beyond their capacity. It’s just one endless stream of frustrations. That’s a real big challenge—to stay positive and keep IRRI working and moving forward in the CGIAR environment.

Being an introvert. There is the challenge of me being an introvert. I am generally happier by myself. People may be surprised to hear that, but I’m a very strong introvert. Meeting the challenge of being outwardly projecting was something I had to learn to do, including being gregarious and dealing with people in social situations. The idea of going to a cocktail party, to me, is hell on earth. If I go into a room of strangers to schmooze, I look desperately for one person I know. I may have a conversation with that person the whole night, maybe not talking to another person. That’s just the way I am. I have to act like I’m not and it IS an act. Dealing with difficult personnel problems was always a big challenge for me. 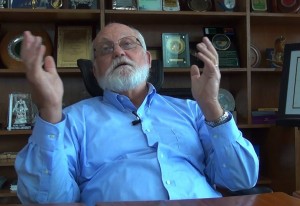 Discovery—one of the greatest joys
Oh the discovery! Realizing that you found something new is a thrill that can’t be described. I’ve worked on the hoja blanca virus, the bacterial pathogens of rice, the pseudomonas complex, and rice blast disease [see below]. In each, I like to think I made some significant discoveries and advances. The realization, when it hits you—that you have an insight that explains something that was unexplained before—there’s nothing like it. It’s a rush, I mean goose bumps; hair stands on end! It’s just a thrill. I think any scientist will tell you that thrill of discovery—of enlightenment—when you had that flash of understanding—indescribable. I had a few of those and, my God, they’re something else. Personally, it takes your whole being to a new level. 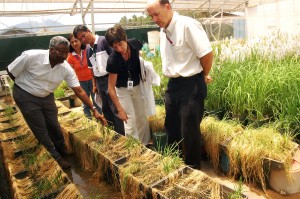 As a director general or research manager, one of the things that I found to be really exciting is taking pleasure from other people’s discoveries. When they make breakthroughs and advances, I get that same thrill.

Just a few weeks after I had arrived at IRRI [in 2005], I was talking with [IRRI breeders] Dave Mackill and Abdel Ismail (right and left in photo) and they mentioned something about flood-tolerant rice. I had been a program leader of the rainfed-lowland system in the early 1990s. One of the things we were interested in was flood tolerance. Dave knew that, saying, “Bob let’s go out to the field, I want to show you something.” In a tank right next to the Hemmi Building that had been drained a few weeks earlier were both live and dead plants. Plants that didn’t have the SUB1 gene [for flood tolerance] were dead; those that had it were alive. Even though I had nothing to do with this discovery, I was blown away [photo below right shows something similar to what Bob saw that day]. I had the goose bumps and said, “This is fantastic; this is transformational! We have something that people have been looking for ever since they started to improve rice and this is it; we’ve got it, we’ve got to go with it.” That really led to the complete rejuvenation of all our work on stress-tolerant rice. 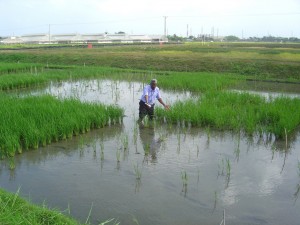 I think IRRI’s work on C4 rice [transferring the photosynthetic efficiency of maize into rice] is another transformational piece of work, and I got equally excited about that. I think the long-term trials [Long-Term Continuous Cropping Experiment] are just beginning to show the impact that deep understanding [over 53 years] will have. I go down the list of work that we do in social sciences, remote sensing, crop and water management. It’s an endless list of really high-quality research that really gets me excited. The excitement of being a part of IRRI and being able to go and represent what our people do at the highest level is—I have no words—it’s something special and it makes up for any of the minor inconveniences of being a DG. The thrill of being part of something so exciting, so important, never gets old.

More goose bumps!
Maize varieties in Burundi. My first set of goose bumps came with the performance of some of the improved maize varieties that I was working with in Burundi [when Bob was a technical adviser in the Burundi Maize Program, Institut des Sciences Agronomique du Burundi, employed by the International Development Research Centre, Ottawa, Canada, 1982-85]—looking at how they performed in farmers’ fields. Oh God! And the excitement that the farmers had when they saw the harvest of what a decent variety of a high-quality seed could do; that was something. 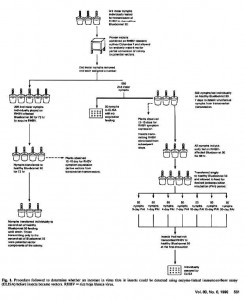 Hoja blanca virus in Latin America. I discovered, through the data, the genetics of insect-susceptibility of the vector of the hoja blanca virus in rice. I realized that it was a disease of insects, as well as a disease of plants, and that the genetics determining whether an insect [planthopper] was able to transmit the virus to the rice plant was, in fact, a resistance-gene in the insect. We have a patho-system of the insect and the rice plant with the same virus. Both the insect and the rice plant have disease resistance mechanisms in them.

It gave me goose bumps when I realized that dynamic—the prevalence of resistance to the virus of the insect population and the prevalence of resistance in the host plant population to the same virus—and their interplay and how that explained the cyclical epidemics of the disease I’ve seen in rice fields. I wrote a paper on that with CIAT virologist Francisco Morales [Genetic determination of replication of rice hoja blanca virus within its planthopper vector, Sogatodes oryzicola, Phytopathology 80(6):559-666; figure at left from that paper]. I think it was probably the most elegant piece of work I’ve ever done. Nobody ever reads the paper; nobody ever cites it [editor’s note: actually it has been cited 23 times], but it was a deep insight and that gave me goose bumps.