We’ve had the great pleasure of working with scientists from virtually every rice-growing country in the world, and these people take their job really seriously. I go to visit—it doesn’t matter what country—these people are proud to be working on rice. They know that what they’re doing is really, really important; they value the relationship with IRRI and it’s just a pleasure beyond compare. IRRI, over the decades, has shaped, in many cases, the national systems and we have helped them in various ways—some small, some large—to have the kind of impact that they’ve had. To me, it’s a sense of pride, as well as it is humbling, to work with the national partners. These guys really want to do the work. They’re the ones out there every day. We come and go, but they’re the ones who “carry the water” and improve the crops. 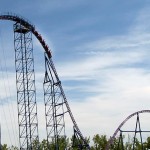 Funding is a roller coaster ride. Photo by Arthur Levine.

The funding roller coaster
Funding—it’s going to be a roller coaster ride; that’s the nature of the beast. I knew when I took the job that we were on a downward slope. I knew that IRRI’s mission and mandate was such that we could turn it around. And I knew that, later when the Institute and its budget were growing, it would not last forever. We would reach a peak and then have a downturn. Achim Dobermann, DDG-Research at the time, and Norm MacDonald, DDG-Management Services, knew that it would happen and that we would have to confront it. It would not be pleasant, but it was a necessary part of life. Plants grow, the leaves become old and they drop. It is the nature of a dynamic organization. We change with some aspects of growth ending while others are beginning. That translates into funding that goes up and down. All of that is very easy to say, but when it comes to the execution, it is not fun. 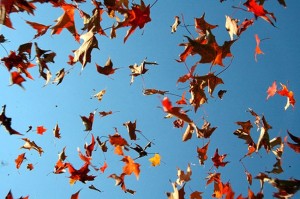 The nature of a dynamic organization: plants grow, the leaves become old and they drop. Photo by Jibby!

Our [recent] sudden financial hit came in 2015. It was unexpected and I’m still trying to figure out what happened. I have no good answer. Just this morning, I sent a message out trying to figure out why in the hell did we actually have to take that huge cut? I’m suspicious; but regardless, it happened and frankly, I was confronted with a choice. I don’t know how public this is. The choice was to draw down our reserves and not make any adjustments to the program to keep everything stable and wait until next year, hoping things got better. If they didn’t, then make the cuts after I’m gone. I thought we’re taking a big negative hit; we’re going to have to adjust to it at some point. It’s reality. If we don’t do it now, it’ll be worse later. This is my last year. I’ve got two choices: I can just coast and have a fine old time, pretending everything is fine and let my successor [Matthew Morell] deal with it when it would be much, much worse. Or deal with it now and help prepare the Institute for a future that will be very exciting and very positive. 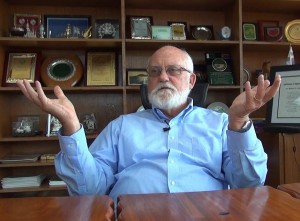 If we don’t adjust now to the budget cuts, it’ll be worse later.

Painted like that, it’s pretty obvious that if you have any sense of responsibility, you’ll deal with the problem now. It still means we had to let go of a hundred staff members and make other adjustments. My sense was to do it. Let’s prepare the Institute, make the hard decisions now, clean the decks as much as we can, prepare the holes, and get things in the best shape we can. When my successor comes onboard, he should have a clean slate to build upon.

I think I had a pretty good reputation with staff. People know that I care about them; people know that I care about the Institute; people know that I tried to do the best for the Institute. In my last year, it would be easier to swallow this kind of adjustment than to have some poor sap come in after 10 years of Bob [to deal with it]. I think that would be a terrible thing to do to someone. Some of my counterparts in other centers, who will go unnamed, did just that and the poor guy who came in afterwards had to make some very hard decisions, making him look bad. I just think that’s totally irresponsible.

I don’t want to put lipstick on a pig, but when you have a problem that confronts you, you better turn it into an opportunity. You don’t do across-the-board cuts, you don’t do lazy thinking. You try to make the institution stronger. I guess most people understood that. My sense is that people believe that we have done what we could in the best interests of everybody in the Institute, and that the Institute is much stronger than it would have been had we not acted that way. That’s my illusion, at least, and that was certainly my intention. 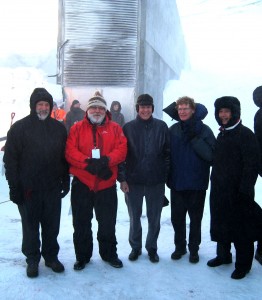 Bundled up at the Doomsday Vault north of the Arctic Circle–fantastic PR. Photo by Crissan Zeigler, IRRI

The Doomsday Vault, Svalbard, Norway—fantastic PR
The Svalbard vault has a repository for most of the genetic resources of domesticated plant species. We have them there in case something goes terribly wrong; we can go back to our genetic resources. Really, think about it. If things got so bad that the only recourse is a vault above the Arctic Circle, in the middle of the ocean, underground in a coal mine, who’s going to go up there to get it? How will they know what to do with it?

However, it’s very symbolic and very important that the significance of genetic resources was brought to the general public’s attention. With articles in Time magazine, Newsweek [in which Bob is interviewed], CNN, the Economist, and CBS 60 Minutes, the public relations value of it is tremendous—the practical value of it, history will tell. But bringing the issue to the attention of the general public, we might say, is priceless. That’s my politically correct answer. [Editor’s note: This interview was conducted before ICARDA scientists asked to retrieve crop seeds originating from the Middle East that are stored in the vault].

Polar bears and the Arctic dinner at Svalbard
I have this anecdote from my Svalbard visit in February 2008. This place is right in the middle of nowhere—it is the definition of the middle of nowhere. People walk around the town with rifles because polar bears are everywhere. The place is a dauntingly dangerous place. In most hotels, there is a stuffed polar bear, over 15 feet tall, towering in the lobby. Every year people get killed by polar bears. Anyway, we were at the opening of the Svalbard Doomsday vault. The international press, CNN, BBC, and other media were there. I was there, my wife [Crissan] was there. 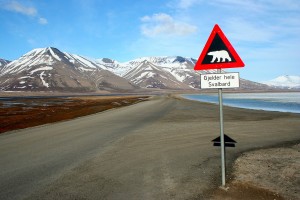 On the way to an Arctic dinner: polar bear crossing at Svalbard. Photo by Sprok.

There was this big opening with the Prime Minister of Norway [Jens Stoltenberg], he gave a talk. Also there were people such as Pat Mooney and every environmental group, such as the Cartagena people—you know “let’s preserve our natural resources” people, half of which are vegetarians. It was just a fantastic meeting of minds of those who were most concerned about the world’s plant genetic resources.

The prime minister, after he finished his speech, said, “I want to invite you all to an Arctic dinner.” I thought, “that’s great, an Arctic dinner, that sounds good.” Now, if you think about it, what do you eat in the Arctic? No edible plants grow there—it’s all animals. We go to this big spread. This wonderful group of folks files through. And there’s this spread of meat—nothing but red meat. You’ve got seal and Arctic hare. The big centerpiece is whale! I thought these people were going to faint on the spot. There were not any greens or vegetables. It was all meat, red meat—and whale. I thought that was just the most priceless thing in the world. These people—the idea that they were expected to eat this.

I thought, “What the heck, I’ll try whale; I’ve never eaten whale.” There was this big whale rib eye and I had a piece cut for me. I was expecting it to be oily and fishy. I took one bite of that whale meat and I understood why the Norwegians and the Japanese still have their whale fishing fleets. It was better than the best piece of Kobe beef you could ever have in your life. Of course, it didn’t taste fishy, it’s a mammal!