Interviewer’s note: In observing IRRI Director General Robert S. Zeigler’s last week at the Institute (6-12 December 2015) before retirement, Rice Today publishes the full 4-hour interview that he granted on 28 August 2015. Excerpts from this interview were previously published in the October-December 2015 issue of Rice Today. The full version of the interview is now available in a special print edition of the magazine.

Bob Zeigler, an internationally respected plant pathologist with more than 30 years of experience in agricultural research in the developing world, has been the director general of the International Rice Research Institute (IRRI) for the last 10+ years—the second longest tenure for an IRRI DG, after only the Institute’s founding DG, Robert F. Chandler, Jr. (1960-72). As DG, Bob set the Institute’s strategic direction and has also been a passionate spokesperson on a wide range of issues that affect rice growers and consumers worldwide. He retires in mid-December 2015. Proclaiming himself an introvert, he gave this IRRI pioneer interview with his customary wit and candor. In addition to his early years, he covers his professional life, which has spanned time spent in Africa, Latin America, Asia, and the United States.

Bob has had a productive research career on diseases of rice that focused on host-plant resistance, pathogen and vector population genetics, and their interactions to develop durable resistance and sustainable disease management practices. As Bob’s career moved increasingly towards research management, his interests expanded to include broader crop management issues, the social forces shaping the agricultural environment, and finally the economic and political arena that frames food security and poverty issues. He has published more than 100 scientific works in these areas and often serves as an expert resource on rice security in the regional and global media.

Agricultural beginnings on Pennsylvania dairy farms
When I was a kid growing up, both my parents came from farming families—they were dairy farmers. My father’s farm was in southeastern Pennsylvania; my mother’s in southwestern Pennsylvania. I was probably mostly influenced by my mother’s side of the family. They were pretty much very small dairy farmers, scraping to get by. I didn’t realize it at that time that they were very poor; I thought that’s what everybody was. The men worked in the bituminous coal mines of Cambria County. They got up at 4 o’clock in the morning, milked the cows, did a full shift in the coal mines, came back to milk the cows, raised their families. That was the way things were and I thought that was normal.

I just had the greatest admiration for those people. On weekends and during the summertime, I worked with them on the farms. I remember my jacket—I would have a lightweight jacket in the spring and in the fall and it took on the smell of the dairy barn. Then, I would wear that to school the following week with great pride that I smelled like a barn. I never understood why the girls would say, “Ewww, you smell like a barn!” I would say, “Yeah, that’s great; I smell like a barn, ain’t that the greatest perfume.” That probably explains a lot about my great history of dating as time went by.

And so, those were my formative years, which instilled in me a very deep admiration for farming and the pride people take in their farms. That somehow rubbed off on me and that’s something I’ve never lost.

A fourth grader’s wish: to be a mad scientist
Science always grabbed my attention as a kid. I was probably just wired that way. I loved plants. My earliest memories are of me working with my mother. She always had a vegetable garden and I just lov 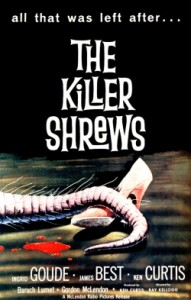 ed it when the plants came up, especially the first flowers in the spring. It just gave me a sense of indescribable joy and a love of nature, life, plants, and gardens that I have to this day.

That led to a curiosity that transferred into science. I liked the 1950s’ science fiction movies, The Killer Shrews and The Bride of Frankenstein. Then, there were all the comic book superheroes such as the Flash, Atom, Green Lantern, Superman, and Batman. They had in them the good and the evil of science all wrapped throughout. I took the good and thought it was exciting. This was pretty instrumental in shaping how I view the world, I think, in retrospect. The mad scientist role was a career model! I could be a mad scientist. 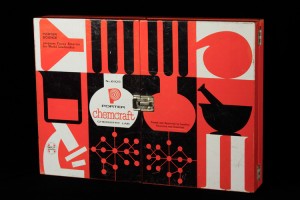 I had chemistry sets back in the 1950s and ’60s. You could buy unbelievable sets that were toxic and explosive. My favorite pastime was to see if I could blow things up—a natural child’s pastime. I had very early on had an orientation towards science, plants, and discovery. The mad scientist role, I think, was that one could do things with science that were not normal.

Biology was mind-blowing
We had moved from State College, Pennsylvania, the home of Penn State University where my father was employed, to Urbana, where my father took a new job at the University of Illinois. My mother was a very devout Roman Catholic. She agreed to move from Pennsylvania to Illinois only if I could go to a Catholic school. So, I did; it was great. Before that, I was a terrible student—and I mean terrible! I was probably in the lowest quarter of students in terms of performance—barely passing. When we moved to Illinois, I had a fresh start. And in this Catholic school [St. Mary’s in Champaign, Illinois], I went into the 8th grade where there was only one classroom for 25 of us. It was a pretty ordinary level of education and I did extremely well. I got my feet on the ground. I did extremely well at the Catholic school. I made friends that I have to this day. I was the worst student in terms of religion. We antagonized the mother superior in that class to the extent that, a few years later, she quit being a nun. I’d like to think that, to some extent, we had some responsibility for that.

I got the broad general science, physics, and chemistry; I did not touch biology. And I excelled. I was by far away the brightest kid in the class since most of the others were juvenile delinquents. Then, in 10th grade, I took biology and again the biology that was offered in the 10th grade, even though it was for the dumb kids—to use that politically incorrect term—the curriculum was actually much more rigorous. I was exposed to biology in a way that was just mind-blowing and I loved it. By being tracked with the dummies, I ended up actually being exposed to a much more rigorous curriculum, and I thought this is fantastic. 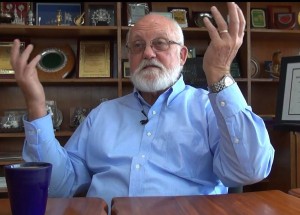 I really got turned on by science. Photo by Gene Hettel, IRRI (16).

I really got turned on by science in a way that was academic as opposed to the mad-scientist comic book/science fiction movies. I thought, “Hey this stuff is really deeply neat.” It just helped change the way I saw things in the world.

I could have gone with the hoodlums or with the kids who were really smart. It was going to be one extreme or the other. Eventually, I fell in with the really smart kids because they were sort of social outcasts and so was I.

When I was in high school with these really smart kids, we were part of a boy scout explorer course. One of our great activities was to go backpacking. We would take summer trips out to the Rocky Mountains and to glacier parks and spend two weeks hiking through these mountains, and that, to me, was mind-blowing and eye opening. Oddly enough, once I got turned on by biology and general science, my whole attitude towards learning changed, and I thought all this stuff were pretty cool. Somehow, I made the switch and got my brain so I could function within a normal school environment.