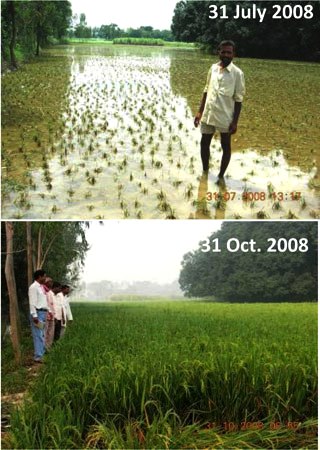 Dave Mackill and Umesh Singh [India-based IRRI breeder] were there in the field with Mr. Pal. They saw little bits of green on the plants; but they looked pretty bad. The neighbors were laughing. When you go to the farmers’ fields and you’re a guy from IRRI, you draw a crowd—always! This crowd of farmers was saying, “Man, tear it out; you’re not going to get anything.” Well, Umesh and Dave asked the farmer to just let it go and see what happens. So, he left the crop there [top picture at right].

A few months later, they go back to visit the field and here’s this unbelievable rice crop full of panicles [bottom picture at right]. I put forth that the beginning of the second Green Revolution (GR2.0) was on that date when Mr. Pal did not plow up that sickly-looking crop, which was ostensibly destroyed by [two] floods. Indeed, it recovered, demonstrating that the new technologies could prevent catastrophe. A farmer can get a decent rice crop [even with seasonal flooding]. That was the beginning of GR2.0. And it is also going to be GR2.0 that will allow us—and broader society—to withstand the onslaughts of climate change. It’s going to be driven by the technology that was demonstrated there in Mr. Pal’s rice field in 2008. 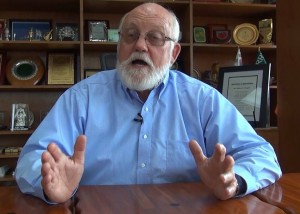 The first Green Revolution took care of immediate problems of food and security.

What was the first Green Revolution?
The first Green Revolution (GR1.0) took care of immediate problems of food and security, primarily in Asia, secondarily in Latin America. For better or for worse, it tended to focus on those areas that were more favored with irrigation and drainage and access to fertilizer and the market. Farmers who benefitted from GR1.0 tended to become wealthier. People say that the GR1.0 only benefitted the wealthy. Frankly, to use a technical term, that’s a lot of “BS”. Those who originally benefitted from GR1.0 were dirt poor to begin with. They became relatively wealthy because of GR1.0’s technology. That was the first transformation. Their kids went to school then they got good jobs and sent money back to the farms. Those farms then became relatively wealthy. That was the product of GR1.0. It did not favor the wealthy. 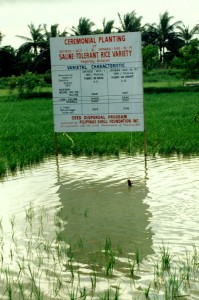 GR2.0 focuses on those farmers who, because of their circumstances, could not adopt the GR1.0 technologies. Those farmers primarily faced drought and floods. If the modern varieties [of that time] were subjected to droughts or floods, they would not perform. GR2.0 is incorporating tolerance of abiotic stresses through the wonderful, wonderful tools of molecular biology, genetics, and computational biology. It has enabled us to identify, manipulate, and incorporate traits such as tolerance of flash flooding and stagnant flooding, drought, and salinity. GR1.0 did not address these stresses that plague very, very difficult environments where the poorest of the poor live. These very, very poor people will be benefitting from the next wave of technologies, a new class of technology.

The semidwarf plant type drove GR1.0. Traits that will allow high yield potential to be expressed under difficult environments are driving GR2.0. Coincidentally, GR2.0 matches almost identically the challenges that eventually climate change is going to throw at us. Across the world, even in the more favorable rice-growing environments, we’re going to see problems of drought, flooding, salinity, and heat. All of those traits, which we’ve been working on now to benefit those people in marginal environments, are going to be equally useful in what used to be favorable environments so that, as climate change impacts the agricultural sector in rice-growing environments, we will be prepared for it. I think that this convenient convergence is going to be a big salvation for the next couple of generations.

I don’t know if anybody will really appreciate the vision and the work that our colleagues are doing NOW in rice research. When people are food secure in 2040 and 2050, they should look back and say, “It is because of the work of those guys in Los Baños, in eastern India, and in Southeast Asia in 2010, 2015, and 2020 that we have food today.” And I look forward to (although I won’t be around; I’ll be dead and gone) to people recognizing that the work we’ve been doing today, much unheralded, in fact, is laying the foundation for establishing food security in the decades to come. 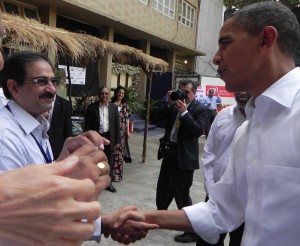 Would the “Consortium” concept work?
After I joined IRRI in 1992, I led the Rainfed-Lowland Program and Consortium. The consortium was a brand new idea of bringing national programs together with IRRI and creating a common research platform or program. I had been trying to do that sort of thing in Latin America and the idea of coming to Asia to do it, I thought, was just an outstanding opportunity. This was a really, really good idea. If we did not engage with national programs, the ability to have an impact would be miniscule.

I remember the first meeting we had. I think we were up in Tarlac [Philippines] and I was sharing a room with J.K. Ladha [long-time IRRI scientist at left in photo with President Obama when Obama visited India in January 2015]. J.K. asked me, “Bob, tell me honestly, do you really believe this is going to work?” That is the kind of question that J.K. always asked. I answered that I think it will work and it is actually a good idea. He thought that was crazy and that it would not work. Whether it did or not, it is hard to say. But as we moved forward, attitudes around partnerships became more sophisticated. GRiSP [the Global Rice Science Partnership] is an offshoot of that same philosophy. I’ve always thought, from the very beginning, that the international centers had to work together with the national systems.

Right away when I started my career after finishing my PhD, Pete Jennings [IRRI’s first rice breeder in the early 1960s] told me, “Bob, if you want to make an impact and have a meaningful career, work in a national system. If you spend your whole life working at CGIAR centers, you will have a very twisted view of the world.” For various reasons, I ended up working in Burundi in a maize program, of all things. During that period as the head of the national program, staff from the CIMMYT [International Maize and Wheat Improvement Center] and IITA [International Institute of Tropical Agriculture] maize programs came through and visited with me and the national program scientists. They told me what crappy work the other center was doing. The CIMMYT people complained about the IITA people and vice versa. I thought you guys are full of it. I didn’t care what you think of the other guy; all I want is the best maize material I could get. That cemented in my mind the attitude of what an international center has got to do for a national system, that is, get them good materials and not to tell them how great it is to be IRRI, or CIAT, or AfricaRice. That was a pretty important lesson for me. I was greatly embarrassed for the whole CGIAR when I saw that kind of attitude.