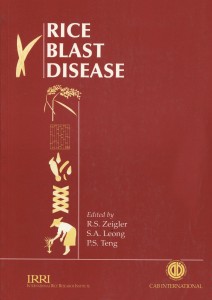 Rice blast pathogen in Latin America. More goose bumps came when I was at CIAT working on the rice blast pathogen [Magnaporthe grisea] and getting an insight into the nature of the asexual propagation of the fungus. I worked with [CIAT colleagues] John Hamer, Morris Levy, and Joe Tohme. Understanding the lineages of the pathogen and how populations were structured and how you could actually predict what kind of resistance genes could be combined to develop stable resistance to rice blast—that was a goose bump moment!

I was sitting in my CIAT office thinking about it. Then, it came to me in a flash; it explained everything! I ran over to Joe Tohme’s office and wrote it all out on a whiteboard on his wall. I called it the “umbrella theory” because it encompassed everything about how one could manage resistance in the rice blast pathogen-plant complex. What it meant for the durability of resistance genes, what determined whether a gene was durable, etc. It was wonderful, beautiful, and elegant. Mostly true to this day, I think, as we gradually moved forward. Joe left it on his board for 18 months; never erased it. He said it took him six months to understand it, but I understood it right from the beginning. It was crystal clear—clear as can be.

And then, I found evidence for a sexual stage in the rice blast fungus in the Himalayan mountains of India [Population structure and dynamics of Magnaporthe grisea in the Indian Himalayas]. That was pretty cool, I tell you—beautiful, beautiful, beautiful; biologically beautiful structures, stunningly beautiful structures! In the context of these mixed systems in the Himalayas, Rebecca Nelson [plant pathologist] said I was involved in micro-tourism; that was exciting!

And the best of all [as mentioned above] was the goose bumps around seeing the stress-tolerant rice varieties and watching them perform in farmers’ fields. My, that’s the ultimate rush—seeing that kind of impact. It will change the lives of hundreds of millions of people for the better. There’s no better rush than that. If you’re a drug addict, I feel sorry for you because you are missing the real rush! 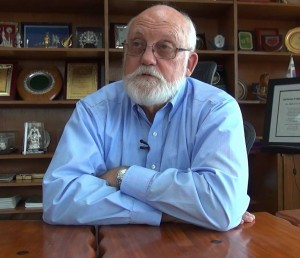 Do we apologize for the Green Revolution? No!

No apologies for the Green Revolution
I believe that those who developed the modern rice and wheat varieties in the 1960s and ’70s and then recommended routine pesticide applications, etc., did not know that they were advocating bad practices. In that sense, an apology is not necessary. You make an apology for things that you do wrong when you knew they were wrong. And you judge the actions of people in the context of their time. We certainly openly recognize it was a mistake, and we have learned from it.

If you look at how IRRI’s research program has evolved from that learning, early on, we started to question the impact of those early Green Revolution practices and took corrective action. This resulted in ground-breaking studies on the biosphere within the rice paddy, arthropod complexity, and the impact of insecticides.

Do we regret? I don’t know. It was a different time and place. It’s pretty hard to second-guess these kinds of things. Apologize? No! Recognize that those practices were destructive to the environment? Absolutely. Make sure that the same thing doesn’t happen again? Absolutely. Be watchful and vigilant of those who misuse tools for short-term gain? Absolutely. 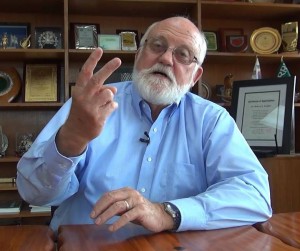 A second flood came and the crop looked really bad!

A story worth telling again—exact date for the beginning of the 2nd Green Revolution
I wasn’t there, but I’ve told the story anyway several times. It was 31 July 2008, three years after being in the field with Dave Mackill and Abdel Ismail [Sub1 experiment mentioned above] and saying we really got to push this forward. We were moving hell and high water to get the Sub1 seed to eastern India where we knew the biggest impact of this flood-tolerant rice would be. We had collaborators in eastern Uttar Pradesh near Faizabad where we had done lots of work in the Rainfed Lowland Rice Research Consortium back in the 1990s. They delivered the flood-tolerant materials to these farmers, just 5 kilos of seed. They planted out a few plots in farmers’ fields; Mr. [Asha Ram] Pal was one of them. The crop came up, then, BOOM! A flood came when the plants were just a few weeks old. The water receded, the field looked like hell, but the plants recovered. Then, a few weeks later, BOOM! A second flood came; the flood waters receded and the crop really looked bad.